The 15 Most Dystopian People on Fox’s ‘Utopia’ 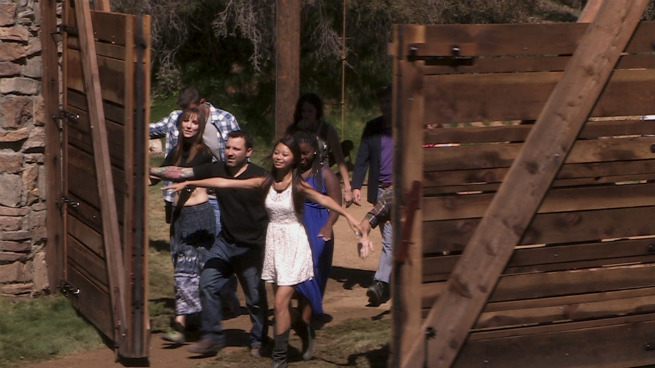 If you missed the premiere of Utopia last night on Fox, turn up the volume on your speakers. Here’s a quick recap:

So yeah, Utopia is, groundbreakingly, a show about a bunch of assholes living in a rusty tetanus barn. Here’s who’s the worst! (In order from least to most likely to trigger an apocalypse.)

Really, the only counterproductive thing about Mike is his hair oh wait—BREAKING: I just tuned into the Utopia live stream and saw Mike getting a sleeping bag handy at seven in the morning. After a few minutes, whoever was monitoring decided to blur out the entire frame. This doesn’t alter the ranking at all — just some useful information.

Chris’s profession is listed as “chili farmer.” I have a strong suspicion Chris specializes in this kind of chili. In an opening montage he says he “stands for love.” His biggest contribution so far is coupling up with Bri, which takes both of them off the board for long stretches of time, during which louder, dumber, more violent people can monopolize the cameras.

Bri is an animal rights advocate whose first major move is to make sure she can bring her bug spray because she’s “like, deathly afraid of spiders … I can’t live without this, you guys.” And with that, she tosses her canned arachnid holocaust into the crate. Bri is a goddamn hypocrite and a monster.

Nikki is a yoga teacher looking for a “tantric partner” in Utopia who suggests Pastor Jonathan integrate some chakra practice into his ministry. Nikki makes me side with hillbilly moonshiner Red more than I’m comfortable with.

Dedeker the polyamorist hasn’t been onscreen much — BREAKING: It was totally Dedeker giving the handy, OK, carry on — and when she has been, she’s been frolicking in the pond, obscured by a giant blurry censor. So she was more or less off the hook, until she suggested Amanda name her baby “Utopia.”

Aside from being totally misguided in coming to Utopia in the first place, Jonathan has mostly been pretty pacifistic, and he has decent people skills. So far his role has been to say something about the Bible while everyone nods vaguely and walks away to the Sin Pond. But he had one quote that stood out to me, and could have come out of the mouth of anyone in Utopia, and pretty much explains why all of this is doomed to fail:

“I’m not here looking for anything. I’m looking to share something.”

Nobody in Utopia thinks they can learn from anyone else there, and they’re actually right, because there’s not much to be learned from a lot of asocial narcissists. Pretty shitty ouroboros you got there, Fox!

Hex is the one who got hospitalized for alcohol poisoning after one night, and she’s only ninth on this list. Think about that for a second.

Aaron seemed like a pretty OK dude, but by the end of the show he, too, was screaming in someone’s face about a diseased chicken. It’s almost as if this show attracts people with zero conflict resolution skills!

Amanda could stand to go higher on this list, to be honest. She’s “the pregnant one” and tries to stage some faux-drama by keeping it a secret for about 24 hours before making a big announcement in front of the group, and she managed to make even that confrontational. During a disagreement about food which Aaron was doing a pretty admirable job of trying to keep at a simmer, Amanda helpfully offered “I don’t mind the aggression. Bring it on if you have it.” Amanda’s not totally useless, though. Here she is washing a rock:

One sure does want to root for Dave, the homeless ex-con who has the first meltdown about five minutes into the game social experiment whatever. Once he cools off, he’s later seen journaling by the campfire, and it’s very endearing. But over the course of the next two hours he snaps two more times. He’s a completely different person when he’s mad, which is pretty troubling to watch. Dave isn’t high on this list because of his behavior so much as for how depressing it is to watch him be exploited on television. It seems like he has a lot of problems to work out, which probably aren’t being helped by being stuck in this loonbucket for an indeterminate amount of time. (Not so indeterminate, actually — Dave was recently kicked off on the live stream, though he may have been readmitted to Utopia later; I guess we will just have to tune in Tuesday to find out. Or not! You could also not watch this show ever again! If you’re mad about this spoiler for the television show Utopia, I have pretty much no sympathy for you.)

Bella is pretty much Amy Jellicoe from Enlightened without the admiration you feel for Laura Dern as an actress. I’d write more, but I can’t even form the words “chicken tractor” without blacking out from rage.

Whose brilliant idea was it to cast Rob, who is lacking both in charisma (say what you will about Red, he certainly has an It Factor) and interpersonal skills? Rob is the token libertarian, though they’re all spiritually libertarians for being on this show in the first place. He’s definitely active on 4chan. Rob is the Utopian who most demonstrably proves you can’t build a productive society out of people who feel they are too special or un-boxable to follow anyone’s rules, whether they be in actual society or in some TV make-believe land.

“Imagine throwing off the shackles of convention and conformity. Imagine what it would be like to start your own world with your own rules.

“Imagine being free enough to be … me, this guy, Dan Piraro.” 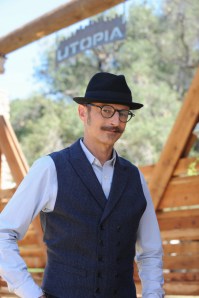 The Reality TV Gods Have Answered Our Prayers: 'Bachelor in Paradise' Has Been Renewed for a Second Season