Thanks to Kickstarter, Zach Braff Finally Has Millions of Dollars 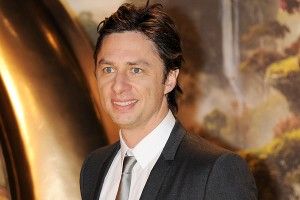 On Wednesday, noted auteur Zach Braff announced on Kickstarter that he was looking for funding for his new movie, Wish I Was Here, the first one he’d write, direct, and star in since Garden State. And the Internet got heated. The basic point of contention: Why does a rich actor with access to Hollywood financing need to take our money? Well, hope you’re sitting down, angry Internet. As of publication, Braff’s Kickstarter has managed $1,451,220. It’s got 29 more days to reach its goal of $2 million. But at this rate, it’ll get there by lunchtime.

In the video above, Braff explains why he avoided the traditional financing routes, and it’s all the stuff you could have guessed: Money people make you choose different actors than you wanted, make you change your script, make you not able to do everything exactly the way you wanted, basically. Writes Braff, “I was about to sign a typical financing deal in order to get the money to make ‘Wish I Was Here,’ my follow up to ‘Garden State.’ It would have involved making a lot of sacrifices I think would have ultimately hurt the film.” And that sound you hear is a million people simultaneously groaning.

The criticism is twofold. First, the thinking goes, the more that famous people take over Kickstarter, the less room or attention or money there’ll be for small, plucky filmmakers with no name recognition who try to get their projects going the only way they can, through crowdsourcing. And second: He wants to make a sequel to Garden State, quite possibly the most maligned film of the last 10 years. Yes, of course, a lot of people love Garden State: I mean, the guy’s got almost $10 billion off this damn Kickstarter already. But people who express opinions on the Internet, almost as a rule, despise Garden State down to its marrow.

Also aiding the backlash, presumably, is the cutesy story line for the project: “‘Wish I Was Here’ is the story of Aidan Bloom (played by me), a struggling actor, father and husband, who at 35 is still trying to find his identity; a purpose for his life. He and his wife are barely getting by financially and Aidan passes his time by fantasizing about being the great futuristic Space-Knight he’d always dreamed he’d be as a little kid. When his ailing father can no longer afford to pay for private school for his two kids (ages 5 and 12) and the only available public school is on its last legs, Aidan reluctantly agrees to attempt to home-school them. The result is some funny chaos, until Aidan decides to scrap the traditional academic curriculum and come up with his own. Through teaching them about life his way, Aidan gradually discovers some of the parts of himself he couldn’t find.”

This part right here isn’t helping much either: “One of the cool things about being a backer is that you can get access to weekly song picks by me, and be the first group to stream the soundtrack.”

People of Kickstarter: You gotta listen to music picked out weekly by Zach Braff (which he sends you in exchange for money he could have gotten elsewhere). It will change your life.