Tremble Before Taylor: Swift’s Red Sold More Than a Million Albums in Its First Week 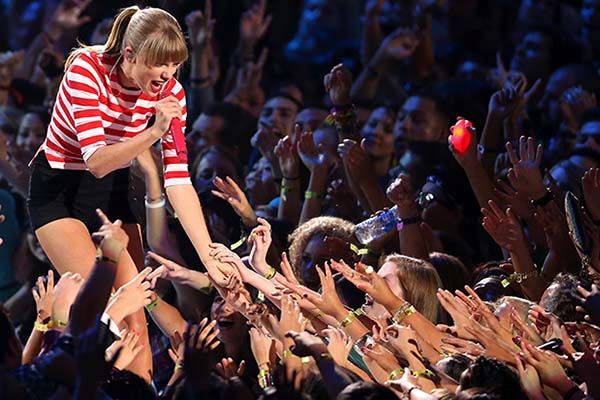 Tuesday night, in a bout of trademark incredulity, Taylor Swift confirmed that her album’s a monster: “They just told me Red sold 1.2 million albums first week. How is this real life?! You are UNREAL. I love you so much. Thanks a million ; )” Ha-ha, Taylor Swift, you sound like you’re pretending that you know what emotions are. But also, seriously, good question: How is this real life? Red, officially, sold 1.208 million copies, which straight up embarrasses this year’s other big debuts (Mumford & Sons, your 600,000-plus week looks so teeny now). In fact, you’d have to go all the way back to 2002 and Eminem’s The Eminem Show, which did 1.322 million, to find a sales debut as big. So I guess the question is: If Taylor Swift can sell a million albums this breezily right now — when the music industry long ago fragmented into a blackened wasteland of embers and despair, ruled maniacally by a power-hungry cabal of former subway rats — how dominant would she have been in the ’90s?

First, some more figures. The big touchstone here is Lady Gaga’s Born This Way, which broke a million in its debut week back in 2011 under spurious conditions: Amazon was pushing the digital download for 99 cents a pop. But Swift didn’t engage in any underhanded dealings to get her numbers up.

As Billboard reports, there was some sales gamesmanship. Target had an exclusive deluxe version, and iTunes was the exclusive digital retailer. Also:

Swift’s unique deal with Papa John’s yielded a meaty 8,000 copies of “Red” … Papa John’s sold the CD for $13 and also as part of [a] large one-topping pizza combo for $22. (Large single-topping pizzas on their own sell for $12.) Swift’s face was also plastered across the top of Papa John’s pizza boxes.

Crafty, yes. But not beyond the pale as far as goosing sales goes. The bottom line: “The lowest that the album was advertised for among all major retailers last week was $9.99.” So if we magically transported Taylor Swift and her current audience to the good ol’ days, would she have been crushing all those ‘N Syncs and Eminems and Britney Spearses? If piracy didn’t exist, would Swift have sold 5 million her first week? I don’t really know, but I’m down to speculate wildly. Cool?

The assumption has long been that country music and teen-skewing stuff still sell well not because they’ve figured out the magic solution for audience loyalty, but because their audiences don’t download illegally (these days, that caveat would be updated with “or are tech savvy enough to use streaming services like Spotify”). Swift, obviously, has both demos in her pocket. Certainly, there are people out there who would have paid money for Red, if they had to. Are there really millions and millions more of them? I mean, maybe. (Again, this is just utter speculation.) And consider the case of JB: On sheer exposure, Justin Bieber is the biggest teen sensation we’ve seen in a decade. And his album Believe only managed 347,000 in its first week. 347,000! That’s not good enough to carry Taylor Swift’s tote bag.

OK, that settles it: If Taylor Swift had dropped in the late ’90s/early 2000s, she’d have her own island nation-state army by now.