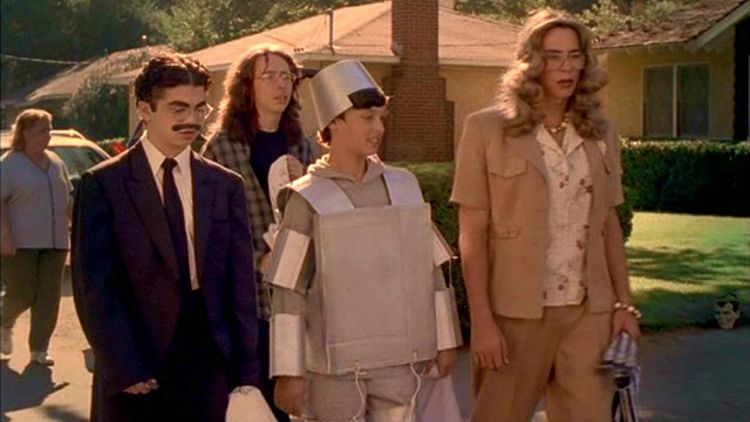 Halloween 2: I Shot Him Six Times

(PS: They never would have made one of these about Jason.)

Charles Pierce: I think my favorite moment in this entire movie is when E.T., dressed up as a ghost, spots the kid dressed as Yoda and goes toddling off after him. This said to me that there really is an entire parallel universe of pop culture aliens Out There, and they all know each other and, from time to time, they hang around the Mos Eisley cantina and bullshit about how terrible their agents are, and how all studio heads should just die, and swap lies about what percentage they got from the last two sequels. And, given the events of the past couple of days, it is clear that, had E.T. caught up with Yoda in that scene, he likely would now be working for Disney, just like Yoda and, well, me.

Freaks and Geeks: “Tricks and Treats”

Brian Phillips: The Hot Dog on a Stick girls will never go out with you. Your bionic-woman bra will always chafe. You will always pelt your little brother with eggs without meaning to. It’s not just you, Seth Rogen; he did seem upset. Life is bittersweet and Halloween is life. You are a tin man with a broken heart.

Dan Silver: It’s important to be safe out there. Brought to you by Pawnee’s department of Parks and Recreation.

Molly Lambert: Nothing says Halloween like grainy uploads of horrorcore Southern rap videos. Bushwick Bill (a.k.a. Richard Shaw a.k.a. Dr. Wolfgang Von Bushwickin the Barbarian Mother Funky Stay High Dollar Billstir) is a member of the legendary Houston group Geto Boys, easily identifiable as the dwarf with one eye. Here he plays the Phantom of the Rapra, expressing the futility of life and fatal allure of crack over a track as steamy as a fog machine.

Jonah Keri: Pick any Simpsons Halloween special clip you like, there are roughly 800 amazing ones. In this installment, Principal Skinner frets that detention is overcrowded with misbehaving students. Meanwhile, Lunch Lady Doris wonders how much longer the cafeteria can get away with serving Grade F meat. The solution? The youngest, most impudent sandwiches you’ve ever tasted. Üter sure does love him some Sloppy Jimbos.

Andy Greenwald: Couple things: The eternal Halloween struggle isn’t between the forces of good and evil. Nor is it a losing battle between your diet and that fun-size Three Musketeers bar. It’s a war between creativity and practicality. As someone who always erred on the side of big ideas — Pac-Man! A playing card! A friggin’ slice of pizza — and thus suffered in more important metrics like “functionality,” “mobility,” and “coolness” — I’m still in awe of the shower costume of one D. LaRusso. I mean, it’s brilliant! It’s funny, hides his punchable face from the bullies, and creates a portable cubby for teenage canoodling. The other relevant observation from this scene is that the bad guys, in addition to being nostril-flaring Aryan cartoon characters, all wear the same creepy skeleton costume. Would any individualistic teenagers ever dress en masse like that? Even if they did study karate at the John Kreese Academy for Self-Defense & Extracurricular Fascism, it seems a little suspect. Anyway, the lesson is, as always, stay safe out there, kids. And if you don’t, hope that there’s a fence-leaping septuagenarian nearby to jump-kick his way to your aid.

Alex Pappademas: Samhain’s big day is always a good time to pour out a little ichor for documented-werewolf-story collector, homeowner, cat fancier, amateur pugilist, Jeet Kune Do practitioner, Wolverine/Animal Man fan, lifelong shirt foe and all-around gnash-ional treasure Glenn Allen Anzalone, the man known to generations of punks, burnouts, monster-model builders, and teenage Frankensteins alike as Glenn Danzig, demon-spawn of Lodi, New Jersey. There’s no heavy-music singer-songwriter living, dead, or otherwise with as preposterous a voice or as pure an aesthetic, and no band ever milked more venom from a single metaphor (adolescence as one long grade-Z monster movie) than his first band, the Misfits, who formed in 1978, spent five years recording the greatest songs ever written about eating brains for brunch and wanting to sleep with Vampira, then broke up in 1983.

From “Bullet” (the Zapruder Film reimagined as history’s first splatter movie) to “Death Comes Ripping” (awesome over cruddy A Better Tomorrow footage, it turns out) to “Mommy, Can I Go Out and Kill Tonight” (self-explanatory), there aren’t too many non-seasonally-appropriate Misfits songs, but I’m particularly partial to “Hybrid Moments,” the best love song ever to include the phrase “creatures rape your face.”

And for those of you who’ll be making out in a cemetery tonight, a bonus cut: “Horror Business,” reimagined as a tender, creepy love note on Bates Motel stationery by Slint’s David Pajo (whose acoustic Misfits-covers album Scream With Me is a weird, worthy tribute to Glenn’s legacy of brutality).

Mark Lisanti: We can all stay in tonight and cry ourselves to sleep knowing we’ll never be able to beat the costume made by a baby.

Sarah Larimer: This is my very favorite novelty party song. Boys becoming men. Men becoming wolves. I danced to this alone in my apartment last night, and feel absolutely zero shame about that.

Tremble Before Taylor: Swift's Red Sold More Than a Million Albums in Its First Week