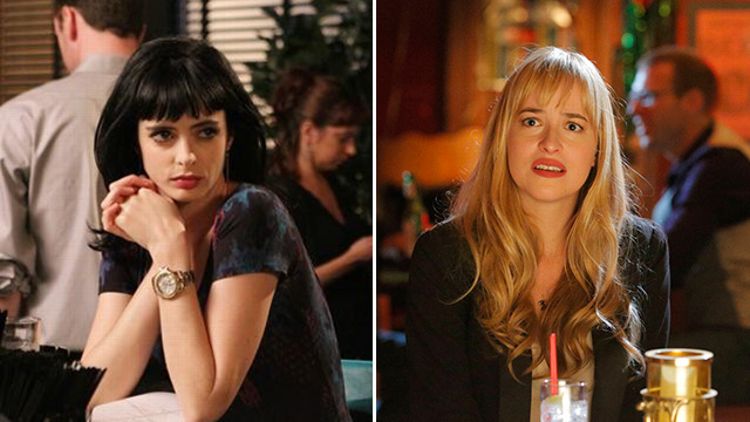 It wasn’t a very funny week for fans of culty comedies. Within about 24 hours, ABC evicted Don’t Trust the B in Apartment 23 from its Tuesday-night perch, and Fox did the same with its freshman flop Ben & Kate. Both shows have filmed episodes remaining — eight for the former, six for the latter — though neither network has announced any sort of plan to air them. The big bad C-word — cancellation — is about as popular around television these days as another C-word. (Community — what did you think I meant?) Instead, both networks are referring to the shake-ups as “rescheduling.” But come on. Even Dawson knows what’s up.

Though sudden, neither move was particularly surprising. Despite some vocal adherents, the viciously manic Don’t Trust the B, created by former MacFarlane-ite (MacFarlaneista?) Nahnatchka Khan, was a tough sell to mainstream audiences more accustomed to seeing cartoons in actual cartoon form. Despite a fierce central performance from Krysten Ritter, the show was only averaging 3.6 million viewers per week. Ben and Kate, from onetime Femperor Dana Fox, was pulling even fewer eyeballs — 3.1 million by last count — and struggled from the get-go. The show’s central conceit — single mother must raise precocious moppet and her immature doof of a brother — was solid enough. But everything went wobbly in the execution, with Dakota Johnson (who replaced Abby Elliott after the pilot phase) able to sell the heart but not the humor and Nat Faxon, as the juvenile Ben, treating every scene as a chance to do a cannonball dive into a shallow pool. If there’s a silver lining here, it’s that the cancellation frees up the truly bonkers Lucy Punch — the funniest thing in either of these shows, even when she’s only playing with straws — for a better, though hopefully no less lascivious, next shot.

I’ve written repeatedly of late that network comedy is having its own quasi–Golden Age. But all the creativity in the world isn’t doing much for commerce: NBC’s once-bright Thursday night is now a charity ward for highly regarded, little-watched half-hours and, after a promising start, even the Peacock’s would-be savior, Go On — a show touted as a more accessible Community — is quietly tanking. As pointed out in this smart piece from Macleans, the networks haven’t launched a legitimate, non-CBS comedy hit since Modern Family in 2009. Part of that may be due to the networks’ tendency to chase the big dog: The development slates of all four are littered with the corpses of halfhearted attempts to make not the next Modern Family, but another Modern Family. But part of it is also due to timing: There’s no real evidence that either Don’t Trust the B or Ben and Kate were liable to turn things around, but most great comedies took at least a full season to get that way. Pulling the plug now — as opposed to before the season or after it — is the worst of all worlds, leaving ABC and Fox with big holes to fill and no idea of what to try next.

In light of this flailing, I find the moves the two networks didn’t make to be just as interesting as the ones they did. For example, the gloriously loopy Happy Endings — to my mind, one of the best shows on all of television — remains on the air, despite barely treading water in its third season with an average of 4.5 million viewers. But ABC, thankfully, seems almost unhealthily invested in the series. (It helps, of course, that unlike Don’t Trust the B, which hailed from 20th Century Fox across town, Happy Endings is a co-production of ABC Studios and Sony Pictures Television.) With the Apartment vacated, Happy Endings will air two original episodes per week until ending its season, as planned, in March.

ABC president Paul Lee seems to appreciate Happy Endings both on its merits — you try gathering a cast that good again — and for its perceived value in attracting younger viewers to what has become an older, female-skewing network. The Macleans article suggests that Lee may be developing Rebel Wilson’s pilot, Super Fun Night, precisely to partner with Happy Endings. But these sorts of demographically attractive pairings seem, more and more, to be a concept better suited to the boardroom than to reality. Linking Happy with The B in the first place was just such a move. And Fox attempted the exact same idea — unfortunately, on the exact same night — with its Tuesday comedy block, a move that, in Ben and Kate, already has its first casualty. It’s potentially not its last: The Mindy Project is barely scraping by, with 3.8 million viewers. Even so, Mindy Kaling seems to have taken a much more aggressive attitude when it comes to fixing things on the fly, and that, coupled with network president Kevin Reilly’s admitted fandom, makes the show a good bet to finish the season and a decent one to get another year.

The biggest loser in all of these Tuesday-night shenanigans may actually be the biggest hit. In its second season, Fox’s New Girl has seen its ratings stagnate even as its quality has soared. I’ve heard talk from people associated with New Girl that they wished very much that Reilly had, in fact, shown less faith in their show — allowing it time to become a legitimate hit before being used as the anchor for an entire night of programming. But time is something those involved in broadcast programming seem to have less and less of these days, particularly when it comes to comedy. Reilly was hoping the promising spark of New Girl‘s first season might ignite an entire — and entirely marketable — night; it’s hard to blame him for trying, even though it appears to have blown up in his face. The old model of sitcoms finding their sea legs — and their audiences — over a period of years has been reduced to a matter of weeks. (By way of comparison, Seinfeld didn’t move to Thursdays at 9 p.m. until its fifth season.) And it’s not like the broad comedies that NBC’s been fastidiously chasing have done much better: The anemic Whitney and Guys With Kids are likely to be next on the chopping block. More and more, the best network comedy occurs when the creators chase their weirdo muses down the nichiest of rabbit holes, creating bananas drinking games and inventing impossibly filthy new euphemisms for sex. It’s good for us, but not for people like Reilly and Paul Lee. Until they figure out how to convert online enthusiasm into concrete data, no sitcom is truly safe, no matter how many hysterical Tumblrs it inspires.