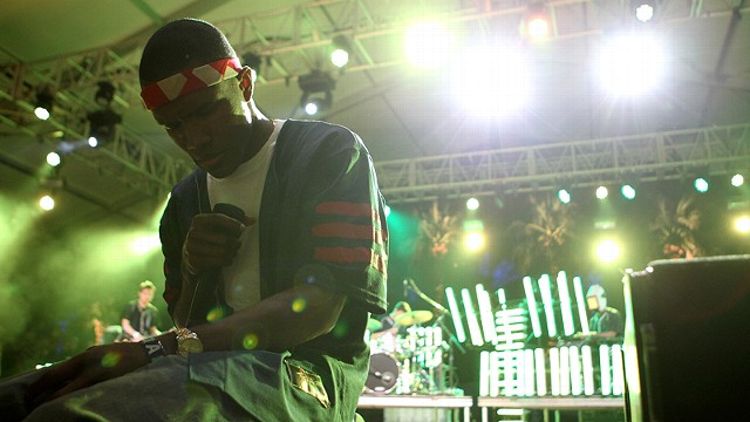 There’s something about the quiet ones. In R&B, it’s not the brash who you need to keep an eye on — they do all the work for you. Marvin Gaye. Sam Cooke. Luther Vandross. D’Angelo. They danced quietly. Despite his broad smile and honeysuckle voice, Gaye was as tortured as any popular artist ever — read David Ritz’s essential biography Divided Soul if you want to learn about his abusive childhood, his psychosexual demons, his divorces, his pained love, his murder at the hands of his father. Cooke was murdered, too, after years of scorn from the church that raised him for turning to secular music. The butter-soft Luther Vandross famously withheld from public conversation about his sexuality and was occasionally attacked as a coward. At one point, D’Angelo was one of the world’s purest specimens, Adonis-like and gifted with the voice of an amnesiac angel. He’s spent the last decade in the wind, negotiating his fame, physique, and place in music. He’s back now. It’s an interesting time for him to return, because he has company.

The logical successor to the Quiet One mantle is Frank Ocean, the R&B singer-songwriter and writer-for-hire who emerged from Odd Future’s snarling alien spore like a winged dove, a splash of light in a pile of slop and anarchic terror. His membership is by design, a salve to the mayhem. Fourteen months ago, he released Nostalgia, Ultra, a slithering, earnest mixtape hybrid compiling songs he’d recorded for his in-limbo Def Jam debut, as well as cheekily straight reinterpretations of songs by Coldplay, MGMT, and the Eagles(!). It sampled Nicole Kidman’s weed-induced speech from Eyes Wide Shut about the paradox of gender, love, and sex. It was the most interesting thing that happened in R&B that year, but mostly because it came out of nowhere, revealing a guy so in control of his progressive commercial R&B shtick, he almost seemed like the product of intelligent design — a splice of DNA from a blogger test tube. “Feeling like Adam when he first found out this existed,” he sang on “Nature Feels.” That about summed it up.

Since then, Ocean sang two hooks on Watch the Throne (you may have heard one of them during the 373 commercials you saw for the incomprehensibly bad Denzel Washington vehicle Safe House), manicured his mystery with sporadically enticing posts on his Tumblr, and chipped in this brief, absurdly lush, sore-thumb song from Odd Future’s The OF Tape, Vol. 2.

Last night at Los Angeles’s Capitol Records Tower, Ocean played Channel Orange, his official debut album, in Studio A. Nearly 25 people huddled — label reps, a smattering of journalists and radio folk, managers, some guys in cargo shorts, and his mom — phones were commandeered, and everyone was forced to pay attention for the album’s hour-long duration. (People looked genuinely unnerved by the absence of devices in their hands.) It was the first time everyone other than 24-year-old Frank and his handlers had heard it, including his mom. “This is the first time I heard it,” she was overheard saying. “A perfect summertime album.” This is sort of true, but not for the reasons a mother might think.

Channel Orange is a strange, beautiful thing. Like some combination of Stevie Wonder’s Journey Through the Secret Life of Plants, Beck’s Midnite Vultures, and Marvin Gaye’s Here, My Dear, with ripples of George Benson’s Beyond the Blue Horizon tossed in, it is simultaneously reaching and small. There are big orchestral swings, and little glances at melody. It opens with a short track called “Start” that is essentially the start-up screen from the original PlayStation. There’s a 10-minute song smack in the middle called “Pyramids.” It’s stitched together by intermittent recordings from old television shows and radio calls, the cries of mad, weird people surrounded by earnest, soft-focus songs. Like so many of the best, wounded oddities from American culture, from Raymond Chandler to Paul Thomas Anderson to Steely Dan, Southern California is the setting. Tales of rich kids in Ladera Heights, “the black Beverly Hills,” transplanted girls reduced to shucking and jiving for crack rock, and strippers dancing for you and you alone, Channel Orange at first seems like a cable-access station transmission from the mind of Larry Flynt. It’s illicit, but also sort of depressing. It swallows you up in experience, but also makes you want to retreat. It grooves, then grumbles. A song written from the perspective of a woman tracking Ocean, “Forrest Gump,” uses the Tom Hanks character and maybe the vantage point of his beloved Jenny to portray a series of missed connections. Ocean tells stories, sometimes explicitly — his biggest hit, last year’s “Novacane,” is probably best-known for its plainly stated first verse:

Model broad with a Hollywood smile
Stripper booty and a rack like, “Wow”
Brain like Berkeley
Met her at Coachella
I went to see Jigga
She went to see Z-Trip
Perfect
I took a seat on the ice cold lawn
She handed me a ice blue bong

There are three guests on the album, and none of them are haphazard choices. The lost-and-found Earl Sweatshirt, low-toned but riveting with complex rhyme schemes on “Super Rich Kids”; Andre 3000, who adds one-and-a-half verses to the arresting “Pink Matter”; and John Mayer — yep, John Mayer — who adds two show-stopping solos on “Pyramids” and “Pink Matter.” To say this is the best musical thing Mayer has ever done is probably fair, and Channel Orange is, surprisingly, a guitar album. All three of those figures have had a strange few years, hiding in the shadows, trying to figure out how much fame they want and need, examining some of their bad choices. They’re Frank Ocean’s kind of guys.

While the album played through, Ocean sat quietly, hands enmeshed together, staring into the mixing board. Occasionally he’d lean back a bit and mouth the words to one of his songs. He never, not once, looked at anyone for the 59-minute album’s running time. By contrast, and for the purposes of explaining these sorts of situations, there was a different energy at a listening session in April for label-mate and fellow R&B auteur The-Dream. Terius Nash, as The-Dream is sometimes known, is brash. He wore a vintage Michael Jordan home jersey (no. 23, not 45, obviously) and selvedge jeans. He jumped up and down, singing along, claiming each song a future hit. Ocean wore a white T-shirt, black denim, and Vans. He never spoke, not even to name a song. Frank Ocean is barely there.

When the album concluded, Ocean turned around and said, “That’s Channel Orange.” People clapped and he looked like he wanted to tear the skin from his flesh while exiting the room very quickly. KCRW’s Chris Douridas managed to sneak in a few questions, about the title and the guests. Turns out this isn’t a radio broadcast from a deluded mind. It’s about what he called synesthesia, but is more specifically grapheme, the neurological condition that associates colors with letters and numbers. It’s sometimes called “seeing sounds,” which was the name of a 2008 album by Pharrell Williams and Chad Hugo’s N*E*R*D. Ocean mentioned that he and Pharrell, who co-produced two songs on Orange and is clearly a hero of Ocean’s, talk about their synesthesia all the time. The album title is a reference to the syndrome and what he saw the first time he fell in love. It was the summer, and everything was orange. Just like this summer.

Filed Under: Frank Ocean, Odd Future, We Went there