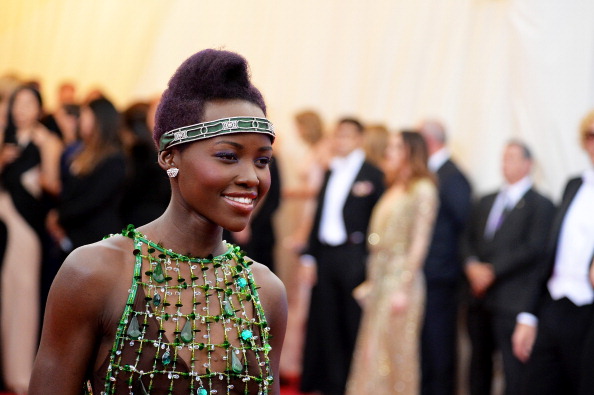 When Episode VII announced its male-skewing, predictably nostalgia-grabby cast a month ago, word immediately followed that there was still a big female role for the taking. The Jedi Lupita dream was permitted to live a little longer — and, as so rarely happens with these things, it totally came true. Academy Award winner Lupita Nyong’o has joined J.J. Abrams’s cast along with Game of Thrones’ Brienne of Tarth, Gwendoline Christie. Nobody knows whom the two will play, only that it’s a double serving of great news for Star Wars: Episode VII: Jedi Lupita and Her Phenomenal Lightsaber Moves.

Also in a galaxy far, far away: TMZ snagged some on-set Tattooine pics. There’s a big creature and a ship and some dusty guys.

And while we’re in the general outer-space vicinity: Check out a Star Trek: The Next Generation shot minus the camera shake. [via]

Arsenio’s return has been canceled. Yes, you can have lots of fun clips online and still not manage to survive as a TV program.

“The very public, very ugly [Casey] Kasem family feud played on this weekend with a dramatic day in court that culminated in a bizarre raw hamburger meat attack.”

Here’s the inevitable “Don’t die on me!” supercut.

Oliver Stone is doing an Edward Snowden movie. Hopefully there are two endings, one after another, like in Savages. Can Stone maybe do that every time now?

Woody Allen’s Joaquin Phoenix movie will be a modern-day story set among “academics, graduate students, and middle- and working-class folks” in Rhode Island.

Hillary Clinton’s getting her own Key & Peele anger translator.

And The Sopranos will have its first Blu-ray release this November. Set aside $279.98 and hours of spare time for the bonus features and commentaries.