Spidey vs. Seth: How ‘Neighbors’ Buried ‘The Amazing Spider-Man 2’ at the Box Office 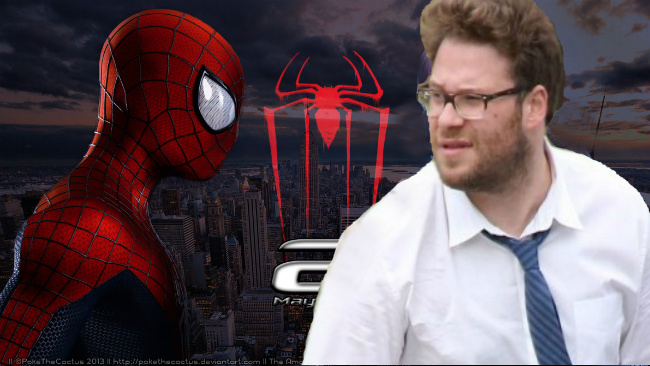 [Note: This post contains spoilers. If you haven’t seen the movies, proceed at your own risk.]

“Dude, Zac Efron totally just beat up Spider-Man and took his Lunchables” was the subtext of pretty much every box-office story Monday morning, when we all gawked at Neighbors’ $50 million weekend (OK, $49 mil, officially) and politely averted our eyes from Spider-Man’s less-than-amazing $35 million. Bear in mind, The Amazing Spiderman 2 has racked up $400 million from international audiences who wolf down our eye-bleeding comic-book extravaganzas like half-priced jalapeño poppers at a TGI Fridays happy hour. At $550 million total, TAS2 still has a shot at getting within spitting distance of the original Amazing Spider-Man’s $750 million; Peter Parker isn’t doing too badly. Still, pride counts for a lot in Hollywood, and the Ten Commandments of Blockbuster Economics clearly state that R-rated comedies with breast-milk jokes shalt not embarrass marquee franchises.

So what gives? Is Spidey 2 really that bad, or is this just a case of superhero schadenfreude? After all, there is an anarchic glee in thinking that somehow Seth Rogen as a bro-daddy had wider appeal than the latest force-fed spectacle. On the contrary, TAS2’s steep second-weekend drop gives me a chance to use my other favorite €20 word: Fremdschämen, which is roughly what you feel when Grandpa walks out of the men’s room trailing a whole roll of toilet paper. Emma Stone and Andrew Garfield are just so damn likable — you really want them to succeed. Hell, I still hate Jesse Eisenberg for throwing Eduardo Saverin’s puppy-dog eyes under the bus in The Social Network. But all those Spideys stenciled on the sides of USPS trucks everywhere can’t help but reek of desperation. Suffering a bad case of Marvel envy, Sony wants so badly for the Spidey-verse to be a thing.

But the studio probably should’ve saved some of the creative focus it lavished on the marketing effort for the sequel, and applied it to the meandering, overstuffed script. (You’d think it would have learned its lesson after Spider Man 3’s emo-addled ADD.) At least the filmmakers could’ve tried to give Gwen Stacy the death she deserved, instead of lazily dropping her right into the middle of the climactic battle just to push a button and plummet to her death. Sadly, Hollywood’s creative gatekeepers seem to have taken the wrong lessons from the post–Breaking Bad and Dark Knight world: Darkness minus complexity just comes across as a cynical snuff film. Marc Webb can deftly choreograph Garfield and Stone’s chemistry like a maestro, but if the screenplay has all the texture of refried beans, it doesn’t matter. Believe it or not, we as audiences are smart enough to see the sleight of hand if you’re too lazy to sleight the hand — thus, TAS2’s 60 percent second-weekend drop.

Unfortunately — or fortunately, if you run a studio — overseas audiences don’t seem to care much about story problems in our blockbuster product, as explosions are the international language. And it still takes a lot of American ingenuity (and processing power) to get the sheen of Spider-Man’s webs just right. We have to remember: Superhero franchises, with set pieces stacked one on top of the other like seven-layer bean dip, are being made less and less with us in mind, and more and more for audiences elsewhere. And since comedies don’t really translate, Neighbors doesn’t even have a shot at that sweet Chinese box office. Which means the economics almost dictate that the Spidey-verse shall march on undaunted.

As for Neighbors, it did everything right: It built a head of steam out of South by Southwest, smartly counterprogrammed against the summer’s foreordained march of men in tights, and most of all, it pulled no creative punches. Universal wisely gave Nick Stoller, Evan Goldberg, and Seth Rogen free rein, while Spider-Man’s script felt like it had all the spontaneity of a board meeting. In the age where Twitter has replaced the morning paper, you can just smell the “meh” from a mile away. Considering movies cost ever more while the average American earns ever less, it’s an expensive proposition to be disappointed at the cineplex. We have a lot more incentive these days to avoid the mediocre, even when it comes with a $200 million price tag. Ironically, the studios simultaneously have less incentive to cater to us. They’re out to conquer the world, Avengers-style, even as we have streaming access to a greater variety of interesting films and television from all around the globe. As we get more sophisticated, studios must serve a broader audience: It’s not enough to please both coasts and the Midwest; they have to start thinking about Hubei province and Liverpool, too.

So, I’m betting that, for the foreseeable future, the superheroes will stick to the script, no matter how stale it gets; if you want any real surprises at the movies, you’ll have to turn to comedies. Those are still made with American audiences in mind.

Channing Tatum has been confirmed as Rogue in a future 'X-Men' movie. ICYMI, here is why Rogue is a terrible superhero.