Songs of the Week: With Special Guests ItsTheReal 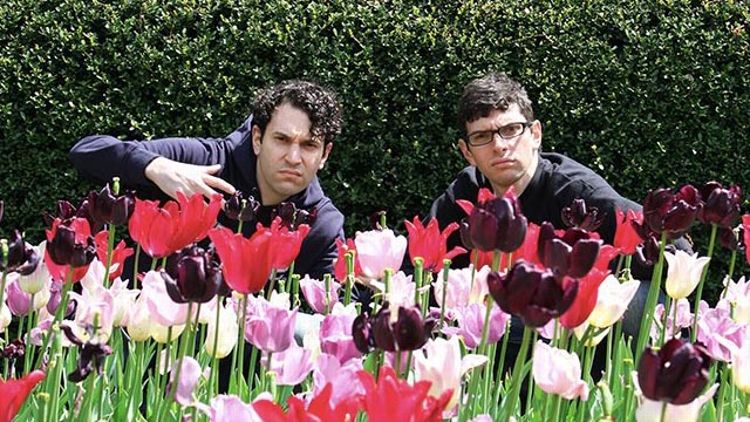 April 5, 2013
by ItsTheReal and Rembert Browne

In the past week, brothers Jeff and Eric Rosenthal of sketch comedy duo ItsTheReal have released a DJ Drama–hosted mixtape, Urbane Outfitters, with the likes of Hannibal Buress, Bun B, Maino, Lil Jon, and Freeway; been written up in a variety of outlets, from the New York Times to Billboard to Fast Company; and retweeted Macklemore nine times. To close out their week, they’re doing our Songs of the Week, because it’s the final step in “making it.”

Jeff Rosenthal: These are the things that go “tadow” for French Montana: his chopper, her ass, his money, and his bling. I don’t know if it’s a sound or an adjective or a combonomatopoeia, but it’s certainly something I’m adding to my everyday-speak.

Rembert Browne: Why aren’t you guys in the N.O.R.E./P.A.P.I. video for “Built Pyramids”?

Jeff: I’m not going to honor that question because Passover is still fresh in my mind, Rem. We actually ran into P.A.P.I. (a.k.a. N.O.R.E.) last week, at DJ Cipha Sounds’s new hip-hop improv show on the Lower East Side. N.O.R.E. came out of his dressing room to take pictures with everyone afterward; we’re standing behind him in a big group of people. He turns his full body around and announces to no one, “ItsTheReal. Hardest motherfuckers out” and then faces front again. Then, “I’m mad I wasn’t on the mixtape,” before taking more pictures. And finally, “I saw the video with Maino, and I heard the song with Bun B, and I liked them both,” before walking offstage. So, it looks like we’re going to do something for the next volume, which we’ll release this summer.

Browne: That sounds made up, but it’s true, which is incredible.

Fabolous, “You Be Killin’ Em”

Eric Rosenthal: I’ll play this song and constantly loop it back after Fab’s first ad-lib, “Niiice,” for 30 minutes at a time around our apartment. I like to think of myself as a SoundCloud version of A-Trak.

Browne: Why isn’t Fabolous on your mixtape? Are you angry at him?

Eric: I don’t think you can ever be angry at a man with a chipped tooth. I’m more mad with whoever — or whatever — did that to him. And if revenge for that tooth is what Fab needs to appear on our next mixtape, then consider it done.

R. Kelly, “Only the Loot Can Make Me Happy”

Jeff: I don’t agree with the song’s message, but I certainly won’t argue with those flutes and shakers. Those flutes are like tadow.

Browne: R. Kelly is performing at the Pitchfork Music Festival. You two are performing at Bonnaroo. Which performance do you think will be better?

Jeff: R. Kelly’s also hitting the stage at Bonnaroo, so I think the best performance will be the one where we come out halfway through his set and join him on “Contagious.” (I’ll play the role of Mr. Biggs, and Eric will do Chanté Moore’s parts, and the R-ruh will be the R-ruh.) And the crowd will go NUTS. Weirdest thing I saw last year at Bonnaroo, not that you asked, was 2,000 people spontaneously singing “Just a Friend” by Biz Markie while walking over to see Radiohead. So, yes, it’s a white crowd, and I have no idea how they’ll like our rendition of “Contagious.”

Eric: It’s Oakland meets Atlanta. It’s BAYTL. It’s what V-Nasty and Gucci Mane’s project could have been, if it wasn’t racist and crazy.

Browne: Why didn’t you let Jeezy on the album? Are you angry at him?

Eric: Are you insinuating that Jeezy gave Fabolous a chipped tooth back in the day?

Jeff: Because I can only play so much INOJ in a day. Interscope tacked on Soulja Boy’s verse in order to make it play nationwide; it failed. But regardless: great song, play it on a loop.

Browne: I vaguely remember them having a mixtape called “The World Would Suck Without Girls.” I agree. Do you?

Jeff: Let me just say that I agree, the world would suck without girls. (Also, women.) (Also, pandas. Save endangered species.) But, I mean, great questions deserve thoughtful discussion, and so I’ll take the counterpoint: Wouldn’t it be nice if the world was just filled with men doing men things, like playing football and eating red meat and listening to the “U.O.E.N.O.” remix? [Closes eyes, opens them.] Cool thought experiment, I’m gonna submit it to ThoughtCatalog.

Eric: This is probably my favorite song on Justin’s album, especially because of the breakdown during the last two minutes, which almost sounds like an interpolation of “You Are Everything” by the Stylistics, which then makes me think of “Everything” by Mary J. Blige, which is a huge guilty pleasure song of mine and now we’ve gone too far into my head and heart.

Browne: Did you consider the mixtape title FutureJeff/LoveEric? If not, what were five other prospective mixtape titles before you settled on Urbane Outfitters?

Eric: We never thought about FutureJeff/LoveEric, but best believe that we’re squatting on that Tumblr now. The five other titles we considered were: Diddy Invented the Remix, Burlington Haute Factory, You Must Be This Tall to Ryde, Hip-Hop Police Benevolent Association, and FutureEric/LoveJeff.

Jeff: I really like the song, but my favorite thing is that Young Scooter has a stupid typo on his hands: on the promo artwork, there is a passport stamp that correctly spells out “Colombia,” as in the South American country from which he supposedly gets his cocaine. But typed out on top of that passport stamp is the official spelling of the song, “Columbia,” which can be a university on the Upper West Side or a space shuttle or a city in Missouri/West Virginia/South Carolina or a sportswear company.

Browne: I don’t have a follow-up to this.

Eric: I like this song solely because Bud Light told me to like it. Interestingly enough, I could also go for a Dr. Pepper. And suddently I have the strange urge to take a picture of that with a Kodak. Anyway, you were saying?

Browne: How much Pitbull did you listen to during the making of your mixtape?

Eric: Pitbull is a constant source of inspiration for the two of us. He’s actually a phenomenal rapper, a fantastic showman, and to put in 20-plus quality minutes each night for the Knicks at his age is awfully impressive.

Browne: Why isn’t Travi$ Scott on your mixtape?

Jeff: Since our mixtape was released for free on DatPiff, we couldn’t afford anyone who put dollar signs in their names. So, we just got DJ Drama, Bun B, Lil Jon, Freeway, and Maino. Oh, right, and then there’s appearances from Hannibal Bure$$ and Tha Bizne$$ OH NO WHAT HAVE WE DONE #TADOW

The Whispers, “And the Beat Goes On”

Eric: The groove is amazing, the harmonies are fun, the violins are funky, and oh yeah, it’s the sample for Will Smith’s “Miami,” which is about due for an un-ironic comeback.

Browne: The Whispers have a song “(Olivia) Lost and Turned Out.” What artist should cover this song, but switch it from “turned” to “turnt”?

Eric: Obviously Will Smith, so “turnt” can finally go to bed.

Roger Ebert and Russ Meyer's Beyond the Valley of the Dolls: An Appreciation

Trailers of the Week: The Great Gatsby, This Is the End, Carrie, and More