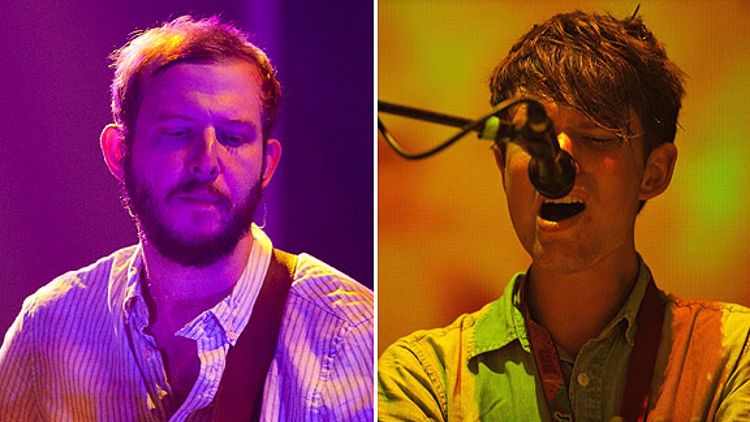 1. James Blake and Bon Iver, “Fall Creek Boys Choir”
Indie-rock power couple James Blake and Bon Iver’s Justin Vernon announced their union just last week, but we already get a taste. “Fall Creek Boys Choir” — featuring Vernon’s falsetto over a skeletal Blake piano run, and also some dog bark type noises — is as predictable as it is perfect. According to the never-wrong YouTube information box, it’ll be followed, in October, with something called Enough Thunder.

2. Ryan Adams, “Lucky Now”
Ryan Adams is putting out a new album in October too! It’s not called I Married Mandy Moore, but, still, exciting.

3. Tom Waits, “Bad As Me”
The only thing better than Tom Waits’ new single “Bad As Me,” the title track from his first new album in seven years? This video of Waits preemptively yelling at you for leaking Bad As Me online. “If you were having a birthday and I came early and I started eating your cake, and maybe opened up all your presents and started playing with your toys, you’d be okay with that?”
(Hear “Bad As Me” at Spotify.)

4. Girls, “Honey Bunny”
San Francisco indie-pop duo Girls broke out a couple years back with their debut, Album, and its single “Lust For Life.” Critical lyrics: “Oh I wish I had a suntan / I wish I had a pizza and a bottle of wine.” They’re back now with sophomore effort Father, Son, Holy Ghost, and things are still complicated for front man Christopher Owens: “They don’t like my bony body / they don’t like my dirty hair,” he sings here. To which we say, “Come to Bushwick!

Gainsbourg announced her new EP, Terrible Angels, by releasing the music video for its title track, a dingy clip featuring some impressively choreographed dance movies in a parking garage. Our appreciation for this was greatly enhanced by its presumably unintentional similarities to Spike Lee’s Inside Man.

6. The-Dream, “Murderer”
This is a song about the difficult childhood of John Wayne Gacy. No, just kidding. It’s another one about a girl.

7. Uncle Murda, “Warning (Remix)” feat. French Montana, Jadakiss, Styles P, Jim Jones, Vado and Cam’ron
Uncle Murda’s time on Jay-Z’s Roc-A-Fella Records was so brief that, for the most part, no one even remembers to make fun of him for it. It is truly heartwarming, then, that Murda managed to come back from the dead with “Warning,” a legit New York radio hit. Now, as mandated by Hot 97 bylaws, here’s the accompanying overstuffed shit-talking remix. Toward the end, Cam threatens to smack your neighbor, the mayor, and a pregnant woman, in that order. Enjoy.

8. Björk, “Moon”
How has Björk never released a song called “Moon” before now? Anyway, this is terrific.

9. Male Bonding, “Bones”
Guaranteed to be one of the top two songs named “Bones” you will ever hear.

10. Lil Wayne feat. Drake and Jadakiss, “It’s Good”
The Jay-Z dis on this track means no one’s paying attention (by the way, here’s Wayne playing it up: “I know there won’t be any repercussions behind what I did’), but Jadakiss’s verse is, as usual, fire: “Gasoline, propane / ain’t no salary cap in the dope game / ain’t no collective bargaining on cocaine.”

Trailers of the Week: Carnage, Scorsese's George Harrison Doc, and Jack and Jill