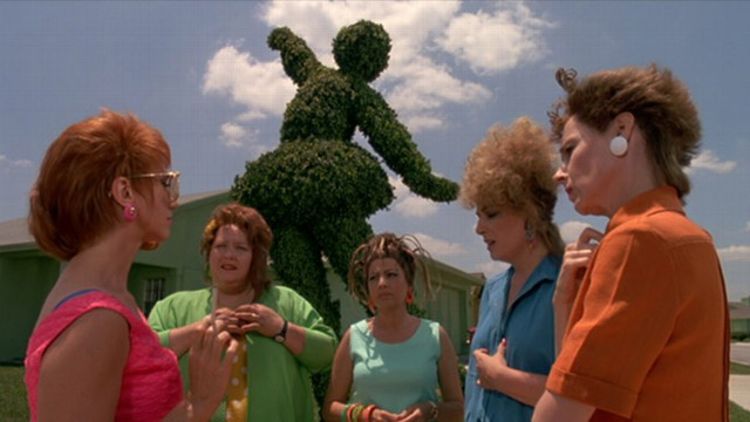 Don’t get us wrong — we’re very excited about David O. Russell’s American Hustle, which gets its limited release this weekend. We’re just equally excited about the hair in American Hustle, and we can’t wait for J-Law’s towering updo and C-Bale’s “elaborate” comb-over to join the ranks of the greatest follicular innovations of our time. Here’s an audiovisual lookbook of some of our favorites.

Mark Lisanti: The key to extracting maximum impact from a hair-acting choice is to play off the friction between the public’s knowledge of your civilian hairstyle and what you present to them onscreen. The more extreme the divide between reality and artifice, the greater the effect of the hair work, as the audience becomes unable (and, eventually, unwilling) to divorce performer from character. There’s a graph I could draw illustrating this, but who has time for that? This is about art, not math.

So look at Sean Penn in Carlito’s Way. It is the spiritual ancestor of every period-illustrative hair decision in American Hustle, the movie that inspired this week’s Hall of Fame exercise. Just as you will not be able to gaze upon Bradley Cooper’s salon-quality curls or the tattered scrap of swap-meet bear rug gently resting upon Christian Bale’s razored-back scalp without knowing there is one of your favorite actors toiling underneath, you could not watch Penn work beneath that fright wig and not marinate in the aggressive Penn-ness of it all. Look into Al Pacino’s eyes as he stares across the barrel of that revolver. He’s been beaten, hair-wise. He’s taking notes. He went too small. One day, he will do all the hair. Every last hair. Adios, counselor.

Zach Dionne: Jesse Camp was 5 percent human, 20 percent voice, and 75 percent hairstyle. He’s still alive, but “was” is the operative word here — the now-34-year-old former MTV VJ has long since faded into cocaine-dusted obscurity, his insane hair vanishing along with his fleeting, screeching celebrity. I wish I could sit here with a straight face and act like Camp was embarrassing to watch even as a preteen, but that would mean I never spent that hour before school one Friday trying as hard as I could to recreate those hair-gel-stalagmites. (Impossible, by the way. Absolutely impossible.)

Katie Baker: I would spend a significant amount of money on a well-made coffee-table book that traced the recent social history of the United States vis-à-vis Hillary Clinton’s hair. While on the hunt for its equivalent in YouTube form, I found this time capsule from some German NBC program (?) in 1994 that basically leverages HRC’s ever-changing tresses to make harsh remarks about her failures in health care reform.

“Congress pulled her ideas out by the roots,” the translated captions smirk, as we go on a visual odyssey through the early ’90s that, with the exception of that awesome maroon ball gown getup, really reminds me of nothing so much as my own mom. (The bike riding and the bangs era in particular.) “Sometimes she piled her hair up, sometimes she hid it or let it right down, or had it short, feminine, waved or backcombed,” the German narrator continues. “People saw no firm direction as with husband Bill.” (Heh heh, hey-o, ain’t that the truth!)

Normally I might feel kinda bad about my obsession with what’s on Hil’s head. I worry ever so slightly, am I contributing to the ongoing marginalization of women in power? But no, I do think if a guy had such legendary (and impeccably of-the-times) personal style variations as Former Madam Secretary Clinton I’d enjoy them just as much. I mean, Joe Biden kinda does. And at any rate, Hillary, being who she is, is obviously totally in on the appeal. Watch the master expertly manage to bring up her hair as it relates to Mighty Morphin Power Rangers while in Israel, where the program was made!! That’s some good politics, ma’am.

Her Twitter bio, which self-describes her as both a “hair icon” and a “pantsuit aficionado” AND uses as its image that baller photo of her in sunglasses that went viral, is more self-aware than even those of the most self-deprecating Brooklyn writers. No doubt Mark Penn–style micro–focus groups have turned up prospective voters like me who love this stuff and recommended we be pandered to. How else to explain this tribute video to the late Texas governor (and unparalleled hair enthusiast) Ann Richards? Watch it all the way to the end and just marvel at how wily our Hillary is. I can’t wait to see her next look.

Emily Yoshida: Our buddy Björk has had many fantastic hair moments. This is not one of them, but this clip was the first thing that came up when I searched YouTube for “best bjork hair.” The description: “a 1985 tv ad for “gerbrot” an icelandic hair conditioner featuring Björk. She is Maria a young woman with a very bad hair day who prays to God for he saves her hairdo.” Everything about this clip seemed too good to be true, not least of which was whatever hallucinogenic moss those Icelandic ad execs must have been munching on in 1985. Unfortunately, a little fact-checking takes some of the oomph away: This is a clip from the 1986 Icelandic TV movie Glerbrot (Broken Glass), which Miss Guðmundsdóttir starred in in her early twenties, and the lack of information about it on the Internet has led to some creative subtitling from the YouTube community. (“In this tV drama for icelandic TV Bjork is Maria an anorexic who don’t want to eat carbs.“) As far as I know, it has nothing to do with hair, but those redheads at the beginning of the clip have some good style.

Andy Greenwald: Most actors who look like Javier Bardem are content to let their chins do the performing for them. But Bardem is far from most actors. When his natural talent and charisma aren’t sufficient to communicate the extremity of a chosen role, Bardem leaves the accents and prosthetics to his lessers. Instead, he acts with his hair. I could easily have chosen his homicidal Prince Valiant 'do from No Country for Old Men — a floppy disasterpiece that won a Best Supporting Actor trophy at the Oscars and the Sassoons. But I’m partial to the eerily lacquered bleach job that had Skyfall villain Raoul Silva looking like an extra in an Aqua video. It was a follicle choice so terrifying that, a year later, no one remembers the scene in which Silva reveals his cyanide-burned face. They just remember the scorched roots on his scalp. All respect to an actor who knows that true greatness begins at the top — of the head.

Tess Lynch: You wouldn’t have your ridiculous hairstyles without your ridiculous stylist. Tip ’em! By the way, this clip is not in English. That was a choice, for flair. I think all YouTube comments should be read exclusively in translation (“The woman cuts her hair while edward seems to enjoy that makes me feel bad,” “A precious friend indeed … If then has the appearance of Johnny Depp, well, then it is the best! ;)”).

Sean McIndoe: I’m a hockey fan, so asking me to pick just one terrible hairstyle is like forcing me to choose which one of my children I love most. By which I mean that it’s easy, because I love Jaromir Jagr’s mullet more than either of my kids and always will.

When hockey fans talk about Jagr’s mullet (and we do, all the time), the focus is usually on the 1991 version. And that’s certainly a solid choice. But I’d argue that we didn’t reach Peak Mullet until a few years later. Like in the clip above, where he’s basically sporting a full lion’s mane.

By the way, nice touch having Jagr’s mullet interviewed by a bald guy. I’m sure the poor guy didn’t hate that very much.

Brian Phillips: One day man will become machine. We will overcome our weak and crippled bodies. Our minds, so biased and isolated, will expand and mingle across an infinite, radiant plane of information. Someone will pitch a contact lens that shows Black Friday discounts, and two dudes at Google will high-five in the cafeteria. They’ll be waiting in line for a Cobb salad. You know, it’s light but it’s filling. Really gets you through the rest of the day.

Until that happy time comes, however, we are what we are: Second Lifers, Next Generation Blu-ray owners, the sad citizens of a hybrid world in which our computer mice inevitably disappoint us. A couple of years ago some soccer players at Bromley F.C. shaved QR codes into the backs of their heads as part of a promotion sponsored by a betting website. If you scanned their hair with a smartphone, it supposedly took you to the Betfair home page. I bet the NSA totally checked up on that. What if it had been a link to subversive message-board content? Can’t be too careful. It’s a dangerous world, and once the kids start scanning each other’s hair lord knows what hornet’s nest they’ll stir up.

It’s pretty clearly not the worst haircut in soccer history.

netw3rk: Here is Jerry Only of the seminal horror-punk band the Misfits wearing a hairstyle of his own design called “the Devilock.” The Devilock is similar in aesthetics to the Flock of Seagulls forward waterfall swoop, just with more demonic intent. In this interview, Jerry takes the classic punk-rock position that kids should have good relationships with their parents, wants his music to foster familial harmony, and decries former bandmate Glenn Danzig’s appropriation of satanic imagery and hopes that he repents and finds Jesus. This is what happens when Eddie Munster grows up and buys a ranch-style house in Montclair.

A Flock of Seagulls

Charlie Pierce: Mike Score’s haircut, which appears to be sliding off to one side, is said to have been conceived by a stylist to resemble a seagull. Actually, any seagull that looked like this would likely find itself flying into the bridge of an aircraft carrier. And it is a sign of the times that Score’s 'do is only about the fourth-weirdest thing in this video. We were lucky to get out of the ’80s alive.

Do You Like Prince Movies? Podcast: Nelson Mandela, Inside Llewyn Davis, and Christmas Songs