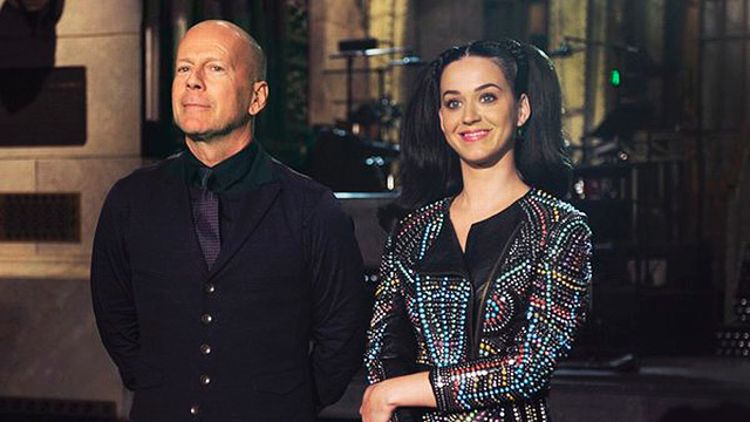 Last week, I broke my hands writing about Miley Cyrus’s SNL double-duty hosting gig. Electric currents ran through my fingers from my very soul, and I typed 580,000 words without blinking. I thought, I should scale back. I told myself, Shut up, you’re on Page 95. I couldn’t stop, and I wouldn’t stop, and some gigantic cosmic force had to step in my path and holler CEASE, BLOGGER. That force was Bruce Willis. Brevity is now my friend.

It’s not that I have anything against Bruce Willis. I like Willis so much that I own a copy of his 1987 R&B album, The Return of Bruno, and have listened to it more than twice. Was I skeptical of this hosting choice? Maybe. Willis has nothing to promote at the moment, with Sin City: A Dame to Kill For lingering in post-production and Red 2 disappearing in the rearview mirror. A host without a vehicle doesn’t necessarily spell disaster, but it seemed like weird timing. After SNL wakes up from its hiatus nap on October 26, Edward Norton — another actor with no current merchandise — is set to headline, which is strange enough that I have no choice but to assume that the government shutdown’s ripple effect has extended to Hollywood like a butterfly flapping its wings in the Congo. The unfortunate casualty of employing an emcee with nothing to shill is that everything seems strangely post-dated (I see you, Armageddon reference), and the episode seemed like it dropped out of a wormhole, a mediocre object with no spatial or temporal relevance.

Willis last hosted in 1989 (with musical guest Neil Young), and he did not seem particularly excited to be back. The cold open was promising enough — Taran Killam and Cecily Strong as Gravity’s marooned astronauts, finding little assistance when they radioed NASA for support because everyone on duty had been furloughed except the janitors — but during Willis’s brief monologue, the wind whispered “weak sauce.” Willis, father of daughters, was approached by Bobby Moynihan as the son he’d never had, and then the dueling harmonicas began. Harmonicas, it turns out, are much louder than Willis’s voice, which was reduced to breathy mumbles throughout the show. He should have taken a page from Katy Perry and roared louder than a lion, or at least spoken at the same volume as a human.

I am going to go out on a limb here and decide not to take too much of an issue with the misogyny that several of my fellow recappers have called out in “24 Hour Energy for Dating Actresses.” Maybe it’s because I live in Los Angeles and I’m used to this cliché, maybe it’s because I figured swiping at actresses instead of actors was just an attempt at specificity and that it was understood that both camps were being called out, or maybe I just really liked Kate McKinnon’s blowsy stage dame. That said, I think the button at the end (a formula for dating stand-up comics) may have been an even better entrée than a dessert: male and female stand-ups are universally more exhausting than regular old thespians.

Next was Willis’s first sketch appearance, placing him as a black ops soldier before a raid. Briefing his commander and fellow soldiers on his plan of attack in full growl mode, he’s supposedly right in his action-hero sweet spot. For some reason, however, Willis seems out of place. He lets the ends of his lines drift off like tiny drunk missiles, and his energy doesn’t match the scene. He peps up a bit during “Barber Shop,” which was elevated by Kenan Thompson and Jay Pharoah (nicely borrowing from Coming to America) as a couple of yarn-spinning barber shop gossip kings: Maybe his SNL wheelhouse is playing a creepy white dude who keeps referring to his “lady” and counters stories about Pam Grier and her bodacious curves with one about Helen Hunt (“you know who’s pretty in a real smart [small? I’ll take either] way?”) and the unnerving gaze of a bird he once watched that watched him back (“I saw a bird lookin’ at me one time, I looked him right in the eye, he looked me like right in the eye — weird”).

Willis also worked well in the ensemble sack-shaker, (how else for men to twerk their fronts?) “Boy Dance Party,” a digital short that tasted a lot like a diet Lonely Island product. When Willis and friends’ other halves (led by Vanessa Bayer) leave the dudes alone — ostensibly to watch a football game — they opt instead to shake their tater skins and chicken wings (needless to say, “skins is butts and wings is arms”). I actually loved Willis’s moves in this, in particular his quadruple-take and rotating fists, so maybe part of the problem with some of the other skits was that they didn’t place his stern grimace in the middle of more silly string and bags of Shake Shack. I tried to keep this warm feeling with me as I watched “The Lady Gaga Talk Show,” the failure of which wasn’t limited to Willis’s totally off impersonation of Michael Kors. Hey, if Bayer (as Gaga) and McKinnon (as Penelope Cruz) are struggling, who stands a chance? This one was a confusing dud, because by all logic a Gaga talk show should be a success, but our Lady of the Koons would have been unrecognizable but for her goggle-glasses and wig, and Willis clung to a stereotypical, somewhat offensive lispiness in a Kors that didn’t bear any resemblance to the original. Thankfully, “Weekend Update” swooped in to save us with a particularly good installment — Strong gets better every week — featuring Brooks Wheelan as a cautionary tale against impulse-tattoos, and an extended segment between Seth Meyers and Strong on the Bruce and Kris Jenner split.

Speaking of the Jenners and their masky faces, the really confusing part of this episode was that there wasn’t an entire sketch devoted to this tabloid fodder (Bruce as Bruce! It seems so perfect!), and I can only assume it’s because the news broke too late to earn its own piece of SNL real estate. I’d bet a quarter that Katy Perry could have phoned in a decent Kris, and it was sort of a bummer she only appeared for her two musical numbers (“Roar” and “Walking on Air”) and didn’t bless us with a cameo. To Perry’s credit, she delivered strong vocals — a point on which she’s been criticized before — and packed the stage with people in zoo-creature costumes and skintight white outfits, which always scores points with me. “Walking on Air,” in particular, was charming because of its combination of sexy lyrics, a wind machine, and ultra-dorky choreography.

We could talk about “Kirby,” the repeat offender in which Moynihan plays a man-child obsessed with his widdle kitty cat, but I don’t think we should give it the attention it craves. Instead, let’s move on to Willis’s most successful sketch, “Centauri Vodka,” which graciously offered him the chance to play the front half of a centaur, shirtless and rocking some long, gray locks. Dragging his mostly invisible back legs (invisible newbie John Milhiser) behind him, Willis nailed this one. So now we know what to do with Willis when he returns in 2037: Cast him as half a horse and a Caucasian hairdresser. Maybe we can expand on this theme, since we have plenty of time to brainstorm.

One thing we don’t need to put Willis through is another round of yelling Eddie, Killam’s obnoxious big brother, who was last seen terrorizing Justin Bieber. For whatever reason, Eddie versus Bieber was a worthy battle — I still think fondly of “glice” — but this time Eddie is meaner and more abusive, has a weaker hook (the mutant word formed from “child” and “son,” “chon,” just doesn’t sing), and even when Willis (as Eddie’s mother’s (Bayer) new boyfriend) slaps him, it doesn’t seem like a fair fight. Willis’s approach to SNL was gentle (perhaps too gentle), and I think he needed more opportunities to occupy alpha roles. Force him to yell! We know he can! He was absent from the final sketch, “Sigma,” which featured first-seasoners Beck Bennett and Kyle Mooney as the deadpan leaders of a Montessori-style fraternity. It was one of the stronger offerings of the night, along with “Boy Dance Party,” and neither of them featured Willis prominently. What gives?

And with a reprisal of “E-meth,” we laid our weary heads to rest for a two-week break. Bruno, I still believe in you. We can do better, but just to be safe, you might want to sip a 24-hour energy shot next time. Surely you must have some lying around.