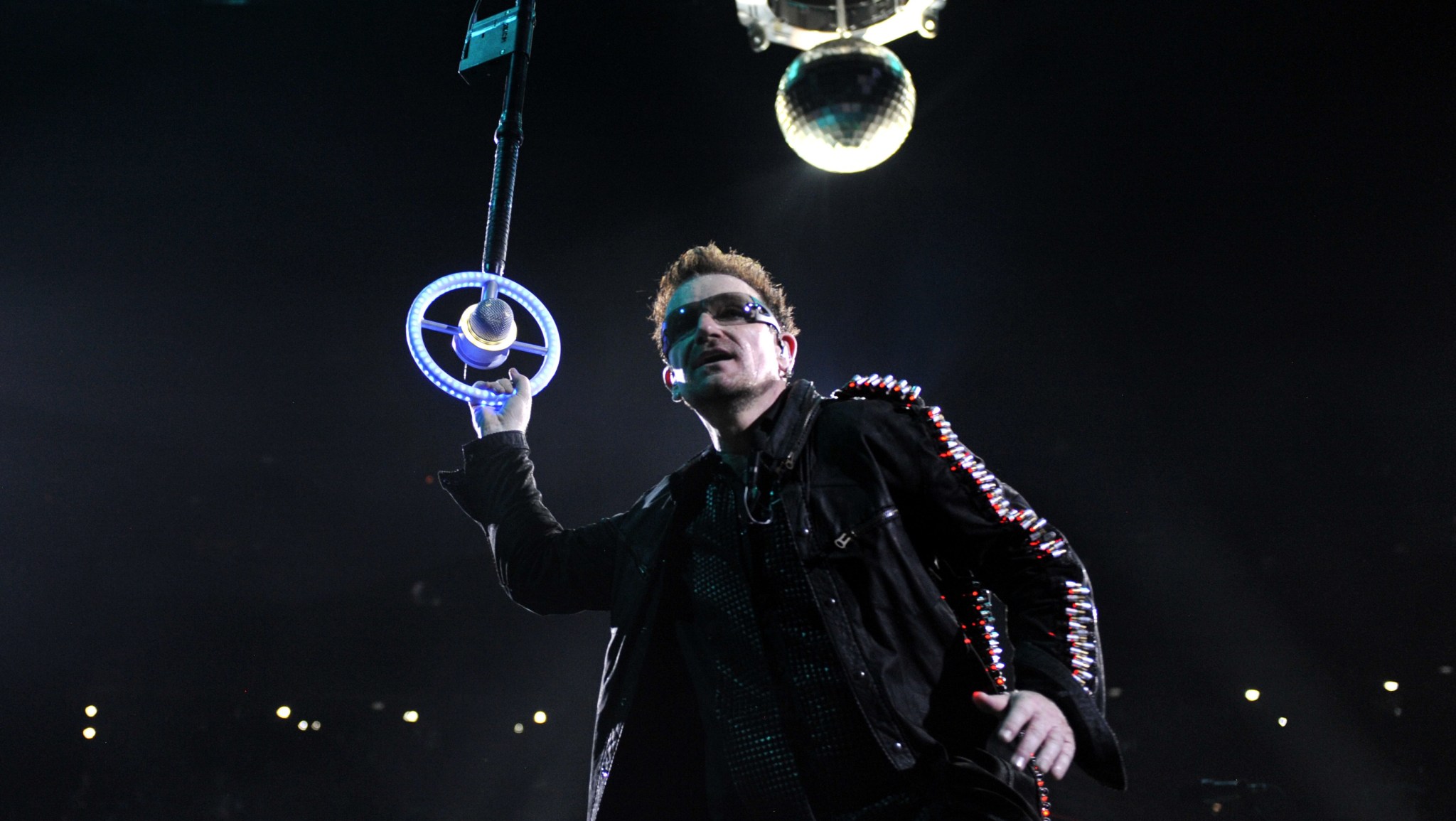 The worst part about being a U2 fan is just how goddamned uncool U2 is. A month ago, this band, my favorite band — one of the best-known, longest-running, and most critically acclaimed going concerns in popular music — gave away a surprise brand-new album. Some people loved it, some people didn’t, and many wanted to make it go away. But at best, the most consistent reactions were that (1) the album consisted of fine, straightforward U2 songs that sounded exactly like U2 songs; and (2) it was kinda creepy how Apple just stuck the song in everybody’s iTunes. So: The music was square, the delivery mechanism awkward. Plus, it all happened as part of a live advertisement for one of the world’s most powerful corporations.

It was arguably the least rock-and-roll state of affairs a rock-and-roll band has ever been involved in. You can say a lot about it; you can’t say any of it was cool.

This is maddening for those of us who came of age during U2’s brief bout of coolness in the 1990s. We fell in love with this band that seemed intent on making weird, slightly trippy, but still accessible music; this band that seemed to have coated its dogged moral core in detached amusement; this band that seemed fascinated by technology and humanity; this band that, we hoped, might be a force for both creative excellence and social change. And then, a few years later, the lead singer was hanging out with George W. Bush and running an investment firm.

I mean, nobody thought the members of U2 were far-left idealogue revolutionaries. But it’s hard not to describe their 21st-century incarnation as the house band for the establishment.

Listen, that’s fine with me, mostly. And in my more positive moments, I feel pretty sure that U2 doesn’t care that much either. Bono actually sang this lyric like a manifesto on the last album: “The right to be ridiculous is something I hold dear!” The new album, Songs of Innocence, is about persistence, constancy, steadfastness, tenacity, staying the course. The songs are meant to sound like U2 songs, I think. That is vaguely radical. In popular music, “breaking the rules” and an unending series of next big things are the status quo; what’s unusual is the group that’s been together almost 40 unbroken years, using its place in the pantheon to release songs about how the next big thing will never satisfy you. What’s unusual is singing about a wife you’ve also been with almost 40 unbroken years. What’s unusual is singing about the church.

And yet: It’s still not cool. And listen, that’s fine with me, mostly, but I’m also tired of bracing myself for snickers whenever the subject of U2 comes up. What I want is just for this, my favorite band, to make the news ONE MORE TIME for doing something, just one thing, that would be considered unequivocally awesome by the pop-culture intelligentsia and the public at large. It doesn’t have to compare to the Zoo TV Tour. It just has to be better than writing guest op-eds for the New York Times. Maybe that’s too much to ask, but in the spirit of faith and optimism, in honor of today, the day the beautiful but utterly uncool Songs of Innocence hits stores in the U.S. (it disappeared from your poor, violated iTunes accounts yesterday), here are six ideas for cool things U2 could still do.

This is partly just bragging — I went to Red Rocks for the first time a few weeks ago. Have you been? It is A WONDER OF THE WORLD. These rocks will blow your mind, with or without the aid of edibles. But really and truly: If U2 is so intent on celebrating its earlier days, this is the place it should return to. The band has dismissed the idea in the past — but Bono also said it would perform its Nelson Mandela song only once, at the Oscars, and then it played it on The Tonight Show anyway, two weeks before the awards show. So nothing is set in stone. Or not set in rocks. The acoustic excellence at the Colorado amphitheater would befit the high-quality live performances the band is known for and augment the stripped-down new songs neatly; the sense of history would be palpable; and there isn’t room for a giant fucking claw anywhere. The capacity is too low to accommodate a typical present-day U2 show, but schedule four or five nights in a row, do some kind of lottery system to keep scalpers from getting all the tickets, and break out the white flag again. Come on — Cheap Trick went back to Budokan.

2. Post the soundboard mixes from the next tour as MP3s

U2 has historically been relaxed about bootleg concert recordings. So why not set up a system in which, if you bought a ticket to a show, afterward you get emailed a link to download high-quality audio of the performance? U2 has the resources to figure out how to do it, and then other musicians could follow the precedent. In an era when touring, rather than album sales, is the primary source of income for most artists, this would be just one more way to induce people to come out and see you. It’s personal, it leaves concertgoers with a memento more meaningful than a T-shirt, and once the basic process was figured out, it wouldn’t involve much extra work on the band’s part. Heck, charge $5 to $10 for it — I’d pay that to put a good show I’d been to on my iPod. And even if you wouldn’t, this has got to be less dumb than trying to invent a new, “unpirate-able” digital music format. No one cares that much about lyrics and artwork, gentlemen. Keep the focus on the songs.

U2 was already wise (?) enough to put him on the cover of the new album, the guy responsible for starting U2, the guy who said, “If Bono left we could carry on. If I left, we’d be screwed.” Every time you’ve wanted to smack this band, it’s a safe bet the drummer has wanted to, too, but even harder. A few gems from the lips of one Laurence Joseph Mullen the Younger:

“I don’t think the lyrics are worth a shit to be honest, if you ask me. I think it’s all about drums.”

“I joined a band to hit things.”

“There’s a thin line between interesting music and self-indulgence.”

“It’s a tough life being a pop star. You know, at the end of the day when you’ve paid all the bills and put the kids through college and that, you know, there’s only enough left for a small island off the South Pacific.”

“My drumming career has always been based on a complete lack of expertise.”

GIVE THE DRUMMER SOME. It’s finally time for Larry to ascend to his rightful place, a place from which he can shut down all of Bono’s precious, pretentious pontification in real time, as it happens. This would buy the band more goodwill than anything it’s done since Live Aid. (We would also accept an insane Adam Clayton Tumblr in which the bassist casually details outings like purchasing models to serve as living furniture for his manor, traveling back in time to study orgy facilitation under the Emperor Caligula, or stalking manticore on his private hunting grounds. Throughout all of this, he is accompanied by a pooka, a shape-shifting Irish spirit. The pooka’s name is also Adam Clayton.)

Did you know the four members of U2 and their longtime producer Brian Eno released an album of experimental-ish, largely instrumental music for mostly imaginary movies, under the pseudonym Passengers, in 1995? They did, and it was what prompted Larry’s line above about the thin line between interesting music and self-indulgence. (“We crossed it,” he concluded.) This one could actually go either way — it might not be cool at all. But I would love to see them do it just as a fuck-you to the lame-os who still think “Where the Streets Have No Name” is the most exciting thing the band ever did. Then I would like them to keep on releasing Original Soundtracks albums — 3, 4, 5, just an unending stream of them, until eventually music fans were just so shocked and grateful when a real U2 album appeared that nobody said anything snarky about it at all.

5. Record covers of their contemporaries’ songs

U2 has gone out of its way to pay tribute to the musical luminaries who preceded the band. U2 has covered the Beatles, the Stones, Bob Dylan, the Ramones, Patti Smith, and Kraftwerk, among many others. These guys have written songs for B.B. King, Roy Orbison, Johnny Cash, Willie Nelson, and Frank Sinatra. They don’t need to venerate the old gods anymore. And they don’t really need to position themselves as elder statesmen for the new generation of pop stars. No, what would be kind of humble and awesome would be if they picked out a dozen songs by artists from their own cohort and recorded covers of them. I’d like to hear their take on, say, Björk’s “Big Time Sensuality,” or “Like a Prayer,” or “7” by Prince, or “How the West Was Won and Where It Got Us” by R.E.M., or “Bullet With Butterfly Wings.” Wouldn’t you? What? Come on, you guys.

Bono has had beards before, but I mean like an Alan Moore beard. This is how it goes down:

“I think you should seriously consider this,” says the Edge.

“You’ve got a responsibility to the band,” Larry Mullen Jr. affirms.

“It could never be as bad as the mullet,” Adam Clayton observes.

“I don’t understand how a beard … how a beard would help anything,” Bono sputters weakly, a confused expression on his face. “I don’t see — ”

“This has to happen,” band manager Paul McGuinness1 states flatly.

“You have to grow a big beard, too, the Edge,” Larry says.

“Goddamnit,” Edge mutters. “I was in a movie with Jack White.”

Josh Wimmer (@farwent) works on the Grantland copy desk. He has written for Spin and io9.