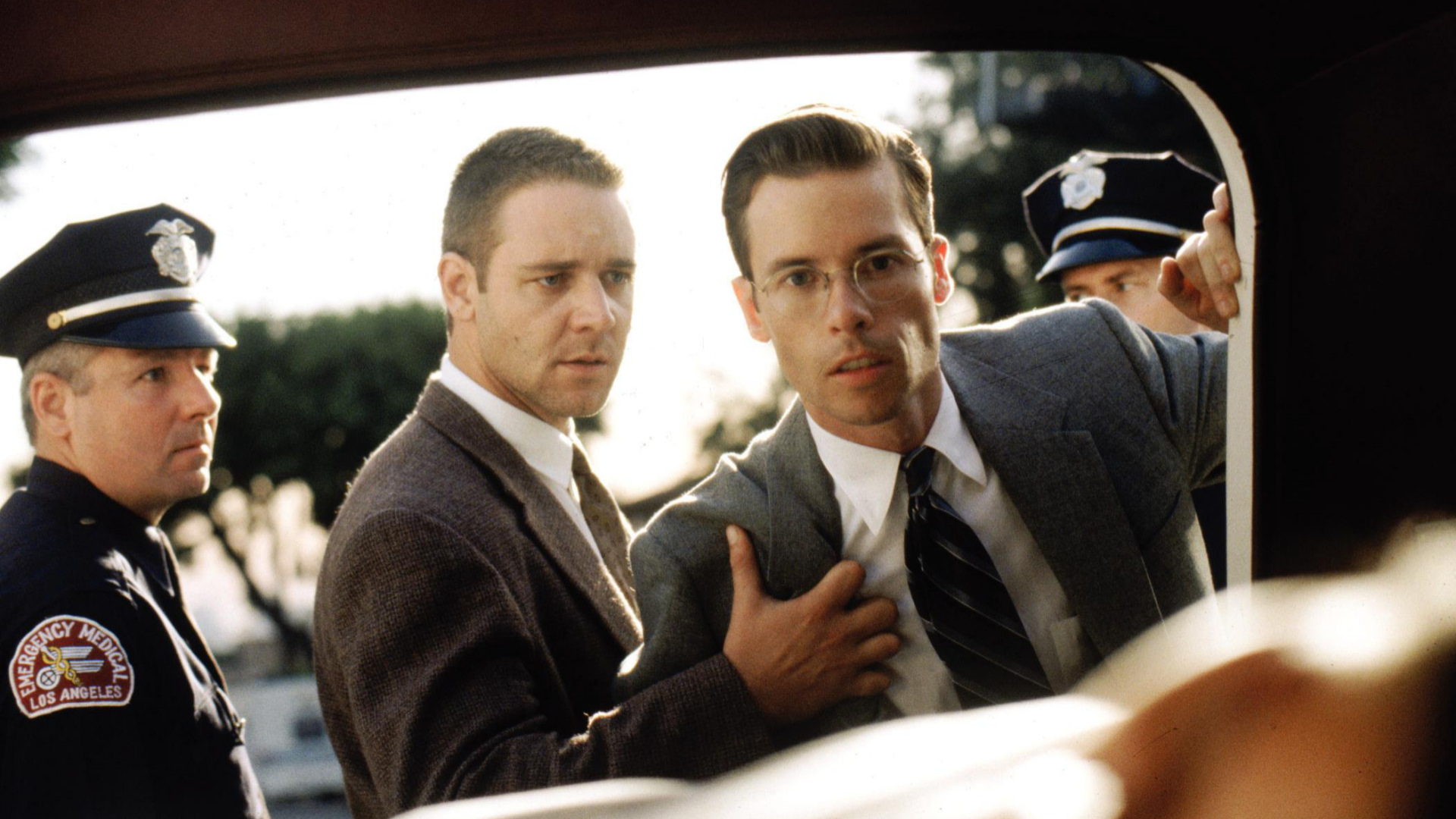 For as long as I have cared about movies in a conscious way — and not as an 8-year-old interested only in watching Star Wars — I have been in love with Los Angeles.

This infatuation began early, when I noticed the city as a backdrop for ’80s action films like Die Hard and Lethal Weapon, in which the renegade cops were either blowing up gleaming L.A. skyscrapers or jumping off of them. As a teenager I came to see the irony in this depiction of the city thanks to The Last Boy Scout and Pulp Fiction, though it never fully exited my imagination.

A little later, Menace II Society, Repo Man, and To Live and Die in L.A. taught me that Los Angeles is a metaphor for a deeper cultural rot universal to the rest of the country, only with better weather and billowy palm trees. But the degradation that L.A. signified wasn’t repellent — on the contrary, for a Midwesterner like myself, it was magnetic, seductive, even beautiful, no matter the intentions of Billy Wilder in Sunset Boulevard, Robert Altman in The Long Goodbye, John Singleton in Boyz n the Hood, or Paul Thomas Anderson in Boogie Nights. Yes, L.A. was a place where it seemed that dreams were born and then almost always died, a gorgeously twisted hellscape of doomed starlets and drug-addicted shooting stars enabled by a lecherous bureaucracy of shady talent agents and low-rent movie producers. It was unquestionably evil, but it also seemed … kind of romantic. Even after I visited the real L.A. — an innocuous land of strip malls and traffic-choked freeways and overrated hamburger franchises — this sentimental attachment remained.

When I phoned Thom Andersen last week and rattled off my precious notions of Los Angeles, the 71-year-old director was nonplussed, to put it mildly. His incredulousness was discernible from approximately 2,000 miles away, like an unseasonable cold front rolling in all the way from Los Feliz.

“It’s always surprised me how much people are interested in Los Angeles. Since I grew up here, it’s always something I took for granted,” he said, quietly but firmly. “So Los Angeles is a romantic place — it’s a little hard for me to get my head into, so to speak. Seems fictional, I guess.”

Moving to Los Angeles wasn’t a choice for Andersen. He was born in Chicago, but relocated to the West Coast with his parents before he entered adolescence. He later went to film school at USC in the early ’60s, at the same time as future “New Hollywood” brats George Lucas and John Milius. Andersen’s own movies have been hard to track down, though that’s about to change: The New York–based distributor Cinema Guild acquired four of his films for release on DVD and Blu-ray, starting with his most famous work, 2003’s Los Angeles Plays Itself, a critically adored but otherwise mostly unseen 169-minute cinematic essay that assembles clips from dozens of L.A.-set films to examine how Hollywood has represented (or, in his view, misrepresented) his home city.1

This type of movie — a Franken-cinema creation reliant on deep samples from films both popular and obscure — has become commonplace in recent years, whether it’s in the form of YouTube supercuts or acclaimed documentaries like the Kubrick conspiracy movie Room 237. But it was still uncharted territory, legal and otherwise, when Los Angeles Plays Itself premiered on the film festival circuit a decade ago.

Andersen spent four years making it, two years each on writing and editing. “I think I started off with very few films and sort of the obvious ones — ones that, if you were thinking about Los Angeles movies, would come to mind most readily, such as Chinatown, Blade Runner, L.A. Confidential,” he said. “Aside from that, I watched hundreds of films, obviously. I took notes on them. I learned a lot from watching those films.” 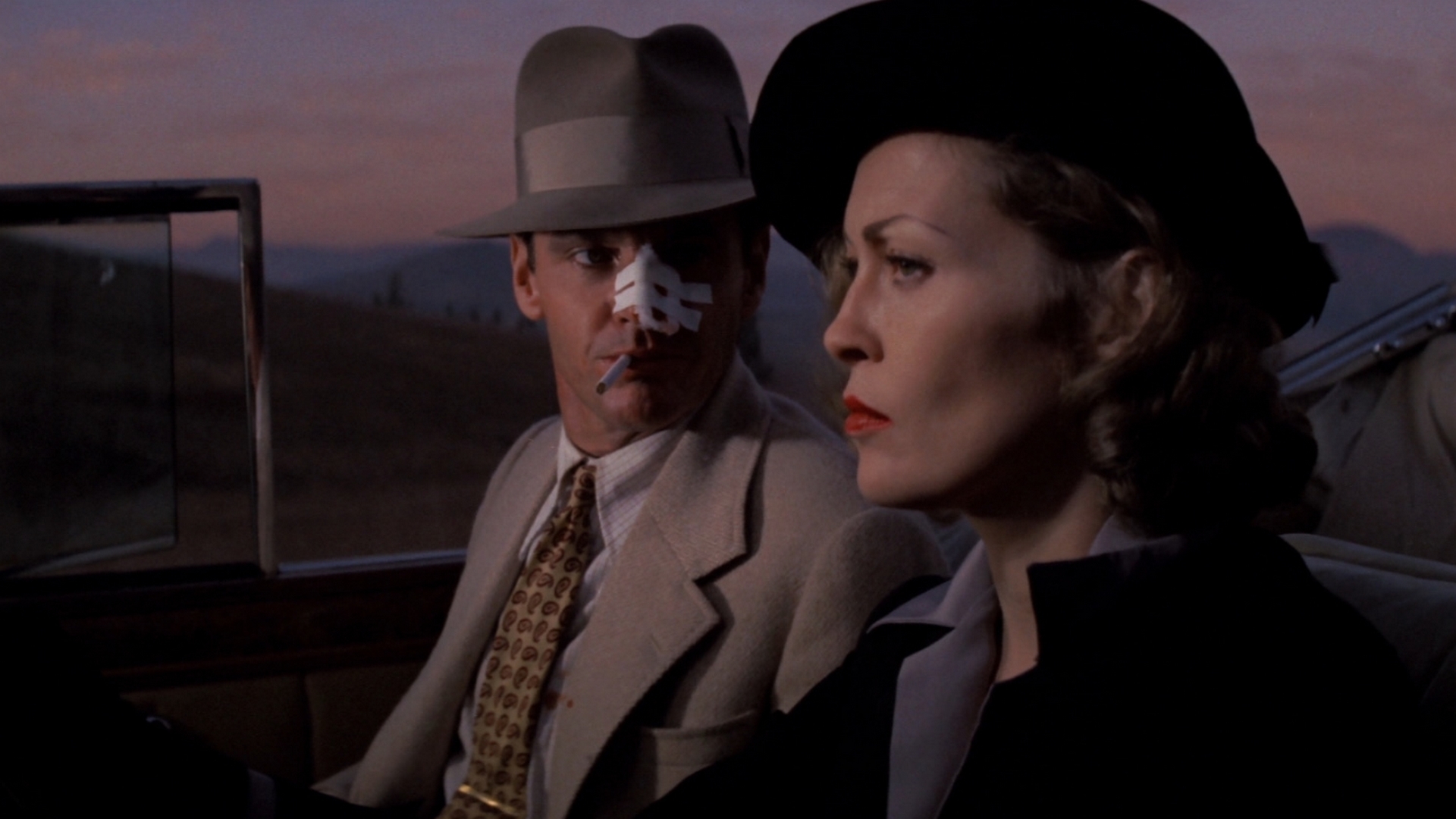 Andersen talks a bit like the hard-boiled narration that moves Los Angeles Plays Itself along: His voice hardly wavers, so it can be hard to detect whether he’s joking, serious, or merely bored with a question. It’s not him talking in the movie, however; the “star” of Los Angeles Plays Itself is Andersen’s old filmmaking pal Encke King, who reads Andersen’s words with appropriate understatement. In conversation, Andersen falls easily into jarring segues, non sequiturs, and pregnant pauses — he has a lot of movies in his head trying to get out at the same time.

For years, Los Angeles Plays Itself endured as an open secret shared among movie buffs. I tracked it down on YouTube after Bret Easton Ellis mentioned it on his podcast. I watched the first hour and then planned to finish it a few days later. But by then it was gone. None of this — neither the appearance nor disappearance of Los Angeles Plays Itself online — had anything to do with Andersen, by the way.

“I would never watch a three-hour movie on YouTube,” he said. “I never really liked the idea that it was up on YouTube; on the other hand, I felt I shouldn’t stop it because it was, after all, the only way that people could see it.” 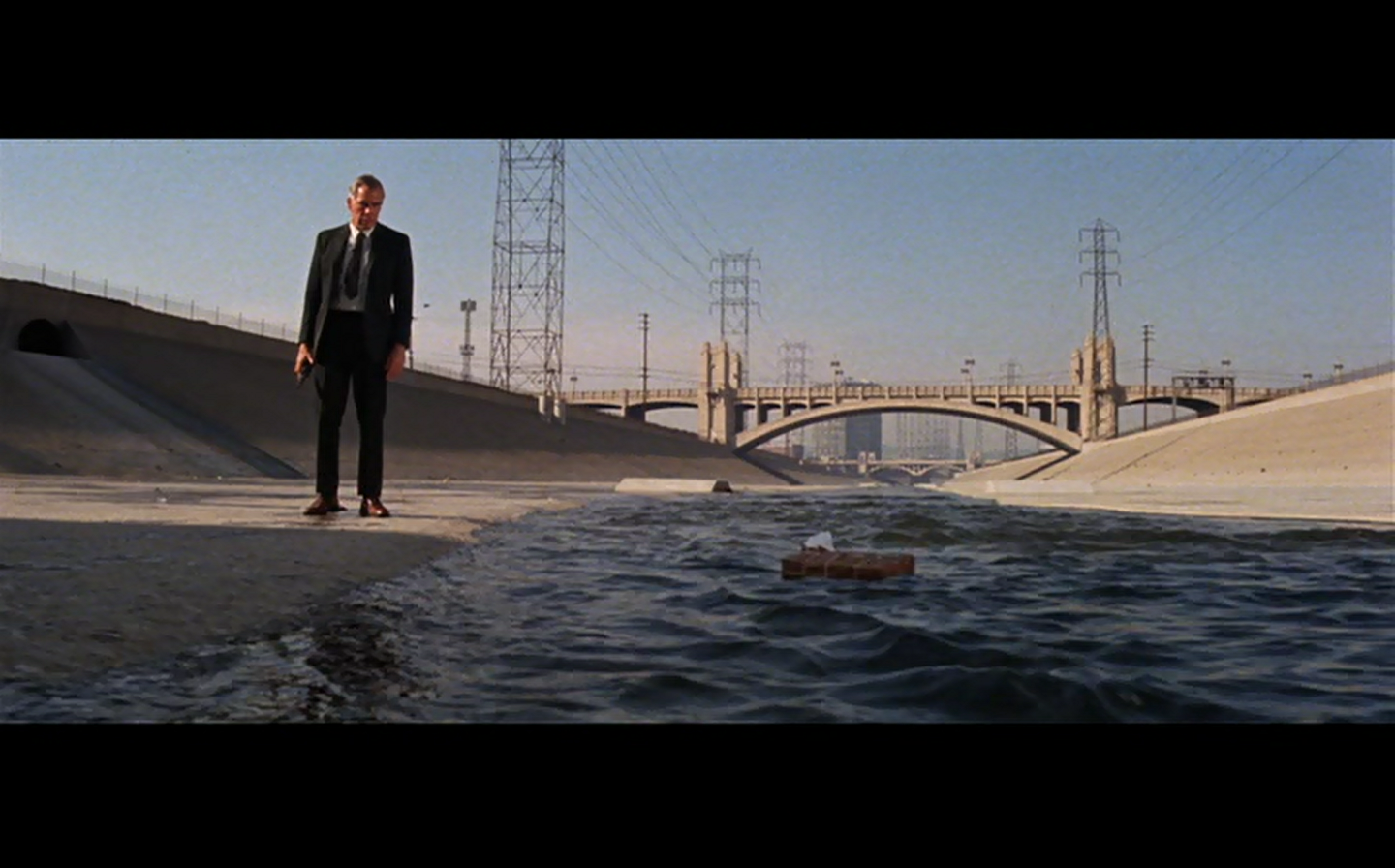 An exhaustive, exhausting, funny, trenchant, and frequently cantankerous work of film criticism and social commentary, Los Angeles Plays Itself was envisioned as a double feature, Andersen said.2 When viewed this way, the first half plays as a witty observational comedy and the second half as an impassioned political docudrama. Andersen starts off by griping about L.A. movies the way only a longtime Angeleno would: He nitpicks Alfred Hitchcock for setting several films in the San Francisco area and none in Los Angeles, and Sylvester Stallone for taking undue “geographic license” with local streets for the car chases in Cobra. It’s not just a matter of realism — though Andersen is a stickler for realism. He’s an unabashed L.A. partisan who bristles at any perceived anti–Los Angeles sentiment, starting with the nickname “L.A.,” which he finds diminishing.

“People who hate Los Angeles love Point Blank,” he says of John Boorman’s 1967 psychedelic noir, though he does express sardonic appreciation for Boorman’s taste in garish decor, which “managed to make the city look both bland and insidious.” He’s less forgiving of how filmmakers always put their villains in the city’s modernist architectural masterworks. The work of John Lautner has been especially exploited in this regard, finding favor among Bond villains in Diamonds Are Forever and Jackie Treehorn in The Big Lebowski.

If Andersen were just a provincial crank, Los Angeles Plays Itself would peter out well before the second act. But his eccentric narration also sticks some weirdly insightful landings, like when he compares the bare-knuckled fascism of Jack Webb’s Dragnet TV series to the austerity of Ozu and Bresson, or marvels at how the supposed dystopia of Blade Runner is actually “a city planner’s dream” of bustling streets, bright neon, and easily traversable aerial highways. “Only a Unabomber could find this totally repellent,” he observes.

The idea for Los Angeles Plays Itself initially came out of a discussion that Andersen, who teaches at the California Institute of the Arts, had in class about L.A. Confidential. The core of his critique of L.A. Confidential isn’t over that bothersome “L.A.” in the title or the fact that one of the film’s villains, Pierce Patchett, resides in the Lovell Health House, a famous modernist wonder. Rather, Andersen’s objection concerns how L.A. Confidential perpetuates the idea of “secret histories.” He dismisses the film’s plot about LAPD cops muscling out mobsters in order to control the city’s rackets as “quaint” in comparison with the real-life public housing scandals that rocked the city in the ’50s. But those real-life scandals were reported in local newspapers, while the fictional scandal in L.A. Confidential is buried, echoing the triumph of Noah Cross at the end of Chinatown. In both films, the powerful get one over on the powerless. Cynicism is affirmed as wisdom. 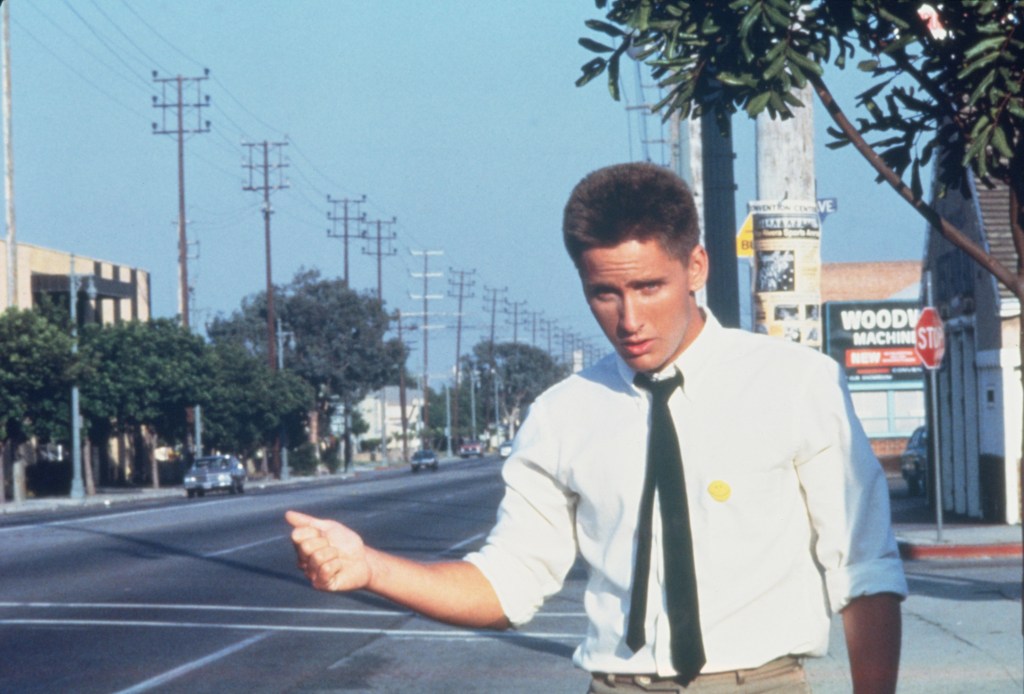 This is where Andersen’s overall thesis emerges: If we can “appreciate fiction films for their documentary revelations,” meaning how they document (perhaps unconsciously) changes in everything from architecture to social mores, then we might understand how stories reflect reality by shaping our perceptions of how the world works, sometimes to poisonous effect.

“We have political ideas about which we disagree among us, but behind those ideas are certain assumptions about the world and what’s normal,” he said. “Generally unconscious, but it’s from there that the true politics might emerge: something that we all know but we can’t articulate it, because it hasn’t been acknowledged in the culture so it’s not available to us.”

Los Angeles Plays Itself doesn’t include any movies made after 2001, and Andersen declined to add any for the rerelease. Logistically, it would’ve been tough, but he also argues that not much has changed since he made LAPI. For instance, I asked him about one of the more famous L.A. films of recent years, Crash. “Characters who in the beginning are presented as characters with good intentions, in the end their actions turn out to be bad,” he said in describing the movie. “Whereas the characters who are presented in the beginning as bad, they do good things in the end. So that’s the irony of Crash, which of course is not very true to life. All in all, it’s probably better to have good intentions than bad.”

Andersen stops short of explaining the motivation for perpetuating cynicism in L.A. cinema. Instead, he mourns what might have been. Los Angeles Plays Itself ends with an extended sequence about American neorealist films from the late ’70s and early ’80s, like Charles Burnett’s Killer of Sheep and Billy Woodberry’s Bless Their Little Hearts. It’s in these movies that many clichés about Los Angeles are dispelled: The characters aren’t white, wealthy, or employed by the film industry. They don’t live in Hollywood. They ride the bus or simply walk to work. These films also remain obscure, though Los Angeles Plays Itself helped revive interest in them.

Like the Kubrick obsessives featured in Room 237, Andersen uncovers hidden messages with his deep viewing of popular movies, though his conclusions are more plausible. But perhaps to Andersen’s chagrin, Los Angeles Plays Itself did not disabuse me of my L.A. romanticism. Andersen uses cinema to illuminate Los Angeles as a real place where actual people live and work. He succeeds in fishing the truth out of fiction, but his insider’s view is only part of the equation — there’s also the imagined L.A. that we outsiders have conjured and projected back onto the city as a reflection of our own dreams and desires. Andersen’s film ultimately works on contradictory fronts: As both a finely constructed argument against Hollywood’s false images and a transfixing “greatest hits” collection of those images. Los Angeles doesn’t just play itself, but rather many selves, one for each moviegoer.

Explaining ‘Civil War’: How Iron Man’s Going to Show Up in ‘Captain America 3’ and Change the Course of the Marvel Universe