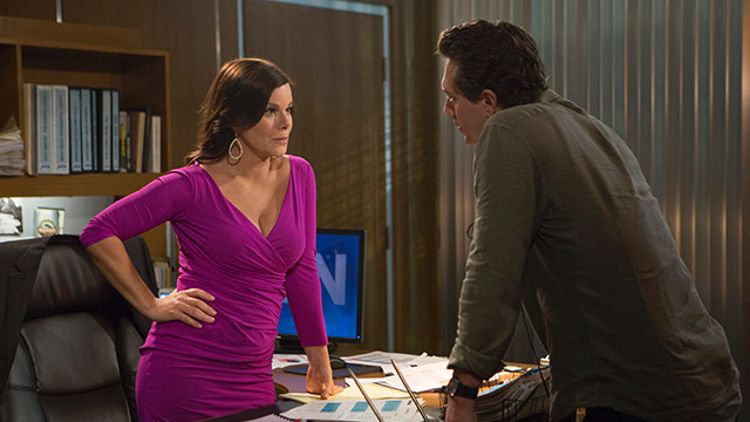 I’m really worried we’re not going to spend any more time with Jerry Dantana this season, and that is a shame, because I feel like he’s having a lot of weird adventures in this post-journalism-career chapter of his life that we should probably get to see. Even if applying to work in crowd funding was a ruse to get Don to say something sue-able, I love the idea of Jerry Dantana huddled in the corner of a crowded Starbucks, behoodied, warming his hands with a PSL and perusing the listings on Mediabistro, wondering what his next plausible move could be while cursing the slowness of the shared Wi-Fi. For a brief moment he could probably imagine himself at home at Kickstarter, valiantly defending the right to self-publish rapey seduction manuals just to get a rise out of the blogosphere, and editing himself into the final cut of the Veronica Mars movie — a harmless cameo, he’d tell his bosses when he was found out, just enough to add a little something to his reel, ’cause you gotta cast a wide net to stay afloat in this modern media market. He definitely joins up with Anonymous or WikiLeaks next, right? They probably value his disruptive tendencies enough to overlook his grossly negligent methodology.

All I’m saying is that Jerry Dantana’s story is far from over, and if we’re not going to see any more of it, I’m just going to have to imagine it playing out concurrently in every future episode of The Newsroom.

That GIFs-as-tattoos technology can get here any day now.

And Leona laughed ruefully and headed to the bar for another Blue Label and was all “A do-over? Is that what you think I want? A do-over? If I really thought you were such a blight to the family, don’t you think I’d just replace you, not encourage you to procreate? I mean, what kind of idiot do you think I am?” And Reese was like “Replace me? You mean in the family?” and Leona was like “Not the family, the company,” and Reese went “You said the family,” and Leona slammed the bottle on the counter and cried passionately “They’re the same thing!” And there was a pregnant pause and Leona turned back to the bar and Reese was pretty sure he saw a weary tear fall from her eye, and she was like “I’m not letting Will and Charlie and Sam resign because they are ACN. And ACN is in my blood. It’s what this family was built on.” And then she walked back toward Reese and touched his face with a knowing gentleness only a mother could and was all “And that means it’s in your blood too.” And Reese was like “I’m confused, do you still want me to have a kid?” And Leona leaned in to whisper in his ear and was like “You’ll never meet a woman good enough for you as long as I’m alive. Now finish up your whiskey and get in your PJs, it’s past your bedtime.”

OVER (PROBABLY NOT REALLY, THOUGH; WE’RE NOT THAT LUCKY): Will & Mac (Willkenzie)

I will not lie, when Will called Mac “hon,” I physically recoiled and felt as though I had just watched him hit her. That is just how much a man should never call a woman “hon,” especially maliciously, and especially in the context of a television drama written by Aaron Sorkin.

General writing tip: You can show a man being that nasty to a woman and then turn around and expect us to take him seriously when he insists he’s “a good boyfriend” only if your target audience is Chris Brown fans. I know this is supposed to prove just how much Mac broke Will’s heart, but all it’s really proving is that Will is an incurable asshole (and not the lovably flawed kind, either).

Like a good French wine, Rebecca Halliday is perfectly aged, well-bodied, and very intoxicating, and I’ve been getting no end of pairing suggestions for her from my fellow ‘Roomies. Up until tonight we haven’t really seen her outside the deposituation room, which has kind of acted as the dramatic equivalent of speed dating; she sits at a harshly lit round table as a rotation of potential suitors stop by to tell her their life stories while she makes fun of them and her team of assistants sit and take notes on laptops. (That’s how speed-dating works, right?) But now that she’s slinking around the newsroom in her election night dress making sex eyes at pretty much everyone she encounters — Charlie! Reese! Don! — we can see her full potential as a player in this torrid merry-go-round that is this ’shipping game, and while a lot of borderline blasphemous ideas were entertained, in the end no one pairing makes more sense than the autopairing. Rebecca Halliday is in the ACN building, and she is feeling herself. Literally.

Also ’Shipping: Jim & Taylor (I STILL HAVE MY EYE ON YOU TWO), Maggie & Taylor (ALSO YOU TWO), Don & Taylor (“I love her for doing the right thing,” Don whispered to his ex-girlfriend), Mac & Cambridge, Don & Congressman Brody’s chief of staff, SLEAL!??!?!

Gwyneth Paltrow, Human After All