Sharknado Shocker! Tara Reid Could Be Cut Out of Sequel (UPDATE: She’s Invited Back!) 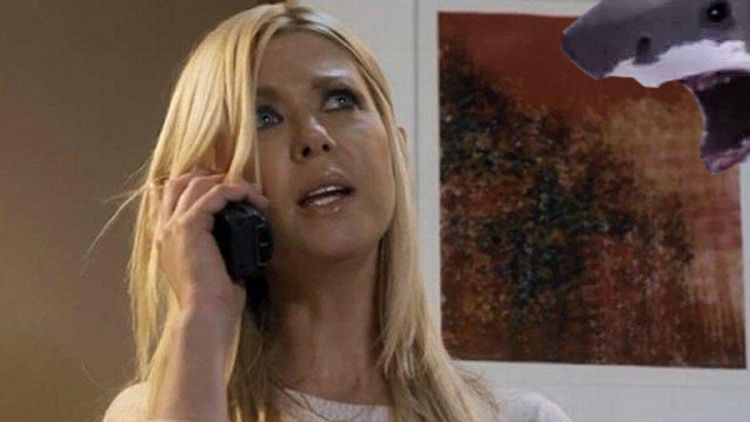 All of our worst Sharknado 2 nightmares are coming to pass. (Well, maybe not the worst worst, as the sharks that will eventually be ejected from a high-speed weather event probably won’t have 50-foot-long Madonna arms and wear flip-flops to a nice restaurant, as that’s more of a very specific and personal terror, but we digress.) This Sunday, TMZ reported that Sharknado megastar Tara Reid will NOT — repeat NOT (caps theirs, and also ours) — be asked back for the sequel. TMZ claims that as you read these very words, the producers are “drawing up their cast wish list … and she ain’t on it.”

You may now pause to shriek like a goblin shark just rose up from the roiling waters of your freshly flushed guest-bathroom toilet, swallowed your favorite aunt whole, and returned to the murky depths of your septic tank to digest her.

TMZ further claims that only Ian Ziering’s acting services will be retained for the next installment, which, duh, he was the one who [SPOILER SHARKLERT] chainsawed himself out of a great white’s belly in the most aggressively executed C-section since Prometheus. A Sharknado 2 without Ziering would be unthinkable, and one can only hope that he’ll be willing to put his promising side career as Grade-A casino beef on hold to extend his “John Travolta moment” long enough to actually costar in something terrible with John Travolta.

But this story is about Tara Reid. What could have happened? Are the producers shrewdly negotiating through the press, hoping that Reid’s reps will see the report, panic that their client’s about to be left behind, and accept the same payday of a duffel bag full of loose Euro coins and moldy Barbie heads they previously negotiated for the unlikely hit? Or has the network decided that there’s no plausible way for Reid’s character to relocate to New York to endure a second tornado-full-of-angry-sharks disaster beside onscreen ex-husband Ziering? It’s impossible to know how this situation will play out; all we can do is hope that Reid’s agents will remain flexible enough to maximize her chances at a return. Given the runaway success of the original, shifting a handful of those doll heads to the back end might be enough to get her name back onto that wish list.

VERY IMPORTANT UPDATE: In The Hollywood Reporter, The Asylum’s David Latt tries his best to douse the fires of TMZ’s Tara Reid sharktroversy. She’s invited back, he promises, and maybe it will be Reid who walks away because of the sudden spike in opportunities her career-reigniting turn as “Tara Reid still acts? Let’s throw four hundred sharks at her!” might afford:

“Syfy and The Asylum love Ian, Tara, Cassie [and] EVERYONE,” Latt said. “Hopefully she’ll [Reid] be the one turning us down because this bizarre film gives her — and the rest of the cast — some great opportunities, and therefore [will be] unavailable.”

“Despite all of the rumors and tabloid stories, Tara was great to work with,” he added. “She showed up to play. Knew her lines. Was into this crazy, silly film. No drama. No diva. … She was great and we would be lucky to have her in S2.”

So there you have it, straight from the producer’s mouth: They hope Tara Reid will not be back because her schedule will be far too clogged with prestige projects, like one about a tornado full of ravenous English butlers that decimates London. We’re glad this brief moment of sensationalist disharmony is behind us.

Weekend Box Office: It's All Woody and The Wolverine