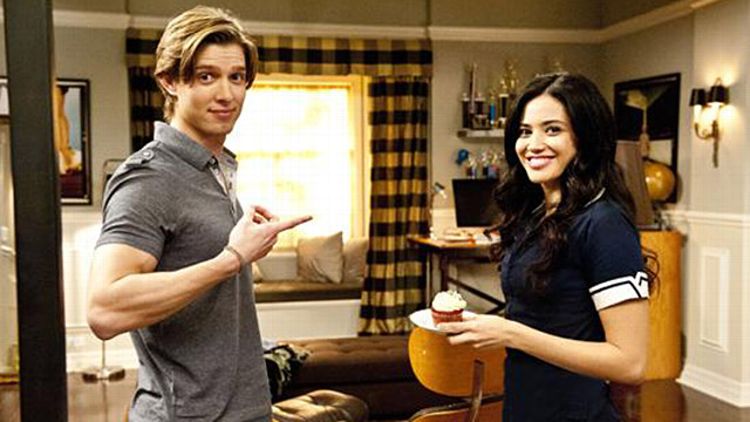 At the moment, I am on vacation in Santa Rosa Beach, Florida, with my family. The area where we are staying is, no joke, very nearly exclusively white people — in fact, in the neighborhood where we’ve rented our house, which is a private community with about 30 vacation homes in it, we are the ONLY non-white family. Prior to watching Devious Maids, we ate enchiladas for dinner and then I sat on the patio with my shirt off listening to rap music, just reinforcing all of the stereotypes for everybody, and I wasn’t even doing it on purpose. :/

Marisol: Marisol continues to Scooby-Doo her way around trying to solve the mysterious “Who Killed Flora?” caper. She spends the whole episode trying to track down a DVD of Flora having sex with someone (the Rich White Guy whom Flora worked for — the guy running the prostitution ring — recorded it and has it somewhere in his house). She finds it at the very end of the episode (the Rich White Guy has a massive collection of sex DVDs in his secret den — I’d say it very much looks like the wall of DVDs at a sex shop, if I’d ever been so tasteless as to visit such a place), but gets fired from working in the house so AY-YI-YI what is she ever going to do now?

Rosie: Rosie continues to get pummeled by her accent — I think the producers of the show might’ve stuffed her mouth full of the stereotypes they’ve not yet been able to work into the show, but that’s just a guess. Oh, also, and probably more pressing: The Glorious Latina Loving that she offers up to the Rich White Guy she works for is so poignant and magical, and the Orthodox White Loving he’s used to receiving has made him so ill-prepared for the experience, that his heart immediately seizes up in his chest. Ain’t no lovin’ like a Glorious Latina lovin’ ’cause a Glorious Latina lovin’ don’t stop, is how that saying goes, I think.

The episode ends with the Rich White Guy in the hospital and his Rich White Wife realizing that maybe she still loves him after all, and Rosie and her glorious V are all alone once again.

Carmen: Carmen’s singing career has stalled, so she’s just a regular ol’ maid now. The man maid she works with (who has spent the entire season in love with her, and subsequently rejected by her) brings home a girl, and Carmen gets so jealous that she tries to kill her with fur shed from a rottweiler because there’s really just no fucking telling wtf is going on here anymore. If you’ll remember, Carmen is also the one who almost killed the One-Legged Russian House Manager and also the one who thought the best way to avoid getting in trouble for being in a room she didn’t belong in wasn’t to leave it, but to get naked and climb inside a piano.

Zoila: The Rich White Woman whom Zoila works for finds out that her money manager has taken all her money and moved to a faraway country, so Zoila spends the episode trying to help her figure out a way to catch a quick several million dollars. This leads to the Rich White Woman having sex with a man in exchange for a painting and then announcing that she is officially in search of husband no. 7. (She’s approximately a million years old though, so I don’t know how great that’s going to turn out for her.)

Valentina: The son of the Rich White Woman who found out she is broke (and the proprietor of the Rich White D that Valentina seeks out with an urgency and desperation that dwarfs that of the guy who cut off his own arm to escape that cave) does a bunch of cocaine and then disappears for the rest of the episode. As such, Valentina is a ghost as well. I can only assume she’s tucked away in her maid quarters, kneeled down before a gigantic Rich White D Statue that she’s fashioned from bits of his hair and uneaten food scraps she’s fished from the house Dumpster. That’s a little thing called having determination, young Latinas.

Me: Hey, Mama.
Mom: Hey, kid.
Me: I don’t imagine you watched Devious Maids last night, did you?
Mom: Nope.
Me: Dang. OK.
Mom: I did read your article about it though.
Me: You did?! Awesome. Thanks. What’d you think?
Mom: It was fine. I did want to ask you about something from it.
Me: Sure. Shoot.
Mom: What’s “Rich White D” mean?
Me: … Uh, what?
Mom: You mentioned it once or twice.
Me: No, no. No I didn’t.
Mom: Yeah.
Me: I’m sure I don’t know what you’re talking about.
Mom: … Maybe I didn’t read something right?
Me: Probably. Listen, I gotta go. I love you.
Mom: You too.
Me: Cool. Hey, thanks for reading. That was cool of you. Don’t worry about reading it anymore though. OK, bye. Bye, mom. Bye.