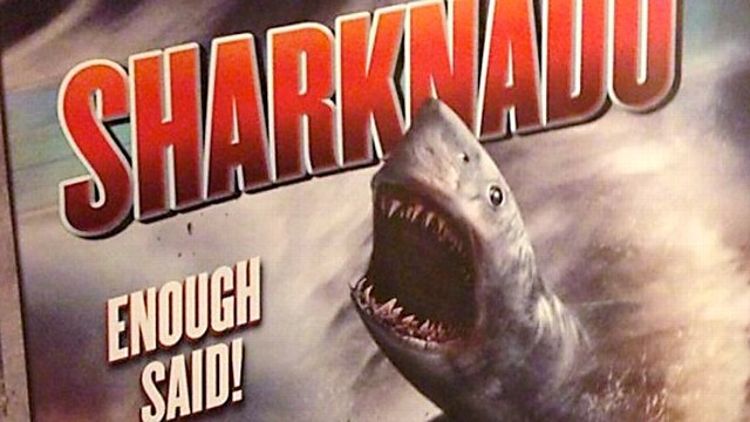 I read a review a couple years back — probably about Hot Tub Time Machine — that postulated that movies with overtly literal titles are providing a public service; once you’ve seen the poster, you can immediately discern whether it’s for you. And on the off chance you don’t already know what sort of evening you’re in for by tuning into a movie premiering on Syfy, its title library is designed to help you, the discerning viewer, make an informed choice.

QUIZ: Which is not a real Syfy original picture?
A.) Frankenfish
B.) Dinoshark
C.) Mansquito
D.) Piranhaconda
E.) Sharktopus
F.) Iguanarilla
Answer: So far as we know, F.

So if you turned in Thursday night clutching a heart heavy with disappointment at the channel’s latest offering, Sharknado, we humbly suggest that the fault lies not with their sharks, but yourself. You either are an extremely understanding romantic partner or you actively sought out a television movie featuring a tornado filled with live sharks devastating metro Los Angeles, and that is most certainly what you were given. That’s just good business, and if you’re willing to suspend your understandings of physics, weather, topography, and geography, it’s damn fine American entertainment for a Thursday night in July.

RESULTS of the race to beat out “As a side effect, the sharks got smarter” from Deep Blue Sea for most difficult shark movie line to deliver with a straight face, and a chilling reminder that Deep Blue Sea got a theatrical release:
• “Sharks don’t like Vegemite.”
• “It’s flooding here. Not the plumbing. The ocean.”
• “Every time it rains in L.A., people say it’s the storm of the century. And even if it is, Beverly Hills’s emergency services are second to none.”
• “We’re gonna stand and fight. We can’t just stand here and wait for sharks to rain down on us again.”

If you missed out, here is some of what you missed out on: In a prologue scene, a shark poacher and his would-be buyer and ship’s crew are attacked by a flock of sharks that move with the wriggly vigor of salmon headed upstream to spawn and bite like, um, sharks. We come aground in Santa Monica, where Ian Ziering’s name is “Fin,” and you are just going to have to get over that.

Fin owns a bar called Fin’s, which explains why it is not a very nice bar. He employs Nova, whom ABC Family diehards will recognize as Lauren from Make It or Break It. Among his customers are Baz (Jaason Simmons of Baywatch fame) and George (John Heard, who is probably good and sick of being referred to as Kevin’s dad in Home Alone, so we will helpfully point out that he will also appear in the upcoming film Snake and Mongoose, which actually appears to be about cars and sounds like it ought to be on Syfy but is not). There are some realistic surfing scenes interrupted by an encroaching storm pushing ahead of it an armada of sharks in oddly regimented formations. No follow-up on the possibility that these sharks might have had paramilitary training is ever given.

"Get me President LL Cool J!" An upcoming Sharknado line, if there is a God.

The movie defuses any how-can-a-hurricane-hit-the-California-coast doubts early on, with a helpful television reporter high on exposition fairy dust explaining that this shark-bearing storm is the first of its kind, leaving you, the viewer, free to bask in the melee as conveniently placed flood waves bear a small band of sharks into Fin’s establishment. Cassie Scerbo kills one critter by spearing it with a pool cue. Heard brains another with a barstool. We haven’t seen Tara Reid yet, which is starting to concern us, because we’ve been avoiding spoilers and if she’s not onscreen by the first ad break, there is the distinct possibility she is playing some sort of elite shark scientist.

Not to worry: Reid turns out to be playing April, ex-wife of Fin and mother of his two children. After the tsharknami lays waste to Fin’s, Fin sets off to Beverly Hills to check on their welfare, with Baz, Nova, and George in tow for reasons of plot facilitation. (Look, this “Fin” thing isn’t going to get any easier. We suggest you just try and enjoy it if you can.) We get our first major character death as the foursome attempts to reach the 405, only to exit the vehicle so that George may be conveniently devoured. Heard’s death cry of “Ow!,” delivered with no more fervor than if he’d stubbed a toe on his coffee table, sets an unfortunate precedent for Sharknado’s characters in great peril. Rewatch the shark attack scene in April’s house and tell us Reid doesn’t sound like a cartoon housewife standing on a kitchen chair to avoid a mouse.

ADDITIONAL DEMERITS: Sharknado’s unnecessarily cynical homages power rankings:
1. Jaws: “We’re gonna need a bigger chopper.” Borderline offensive.
2. Jaws: Shooting a pressurized tank in the mouth of a shark to make it explode (and this happens EARLY).
3. 1941: The Santa Monica Ferris wheel rolling away, because hell, let’s just pillage the entire Spielberg catalog for laughs that could be better spent lingering on that one guy who dies not from a shark bite, but just from being flat-out crushed by a falling shark, which seems like it would be a highly underrated sharknado danger.
4. Twister: Ziering sends a Hummer filled with nitrous canisters (OK!) and a homemade bomb up into the tornado for what you’re supposed to think is the grand finale Sharknado showdown.

Fin and friends navigate their way to Beverly Hills and Fin’s old house, where we meet April and April’s boyfriend, who is summarily dispatched by a helpful nearby shark. (And did we miss something here? Is Reid supposed to be playing some sort of elf? She has this weirdly pearlescent sheen to her skin throughout the entire movie that suggests some otherworldly origins to her character that don’t get explored, but the daughter has just a bit of the same glow, which does support our theory.) Fin and April’s son turns out to be away at flight school in Van Nuys, which is just as well, because our heroes are going to have to go somewhere once the house fills up with seawater and collapses.

LIST: Obstacles encountered by Fin and associates en route to Van Nuys:
• A bus full of schoolchildren beneath a bridge and a shark that can climb ropes with its teeth.
• An aspiring actor killed by a flying piece of the Hollywood sign.
• A shark that has somehow beached itself on the roof of the protagonists’ vehicle without anybody inside noticing until the shark begins to thrash about and bite open the roof; and then the car blows up.

It is about this time that Fin’s son, Matt, has this bright idea, which we have copied down for you verbatim: “Instead of letting live sharks rain down on people, we’re gonna get in that chopper and throw bombs into the tornados.”

It is this plan that leads to Fin shooting falling sharks out of the air with a handgun to clear a path for Matt and Nova in the helicopter; and to a shark clinging to the underside of the helicopter like it’s read too much squalene True Lies fan fiction; and to Nova tumbling out of the helicopter and directly into the mouth of a great white shark. And you’d better believe that when Fin says he’s “gonna finish this,” he means what he says, because it is 10:55 p.m.

This last bit requires no embellishment, because what could we add to Fin pushing his ungrateful daughter out of harm’s way, hoisting a chain saw, and leaping into the mouth of the great white so that he can chain saw his way out of the shark’s innards, bearing with him an unconscious but living Nova? (You had to know this was coming right around the time Scerbo delivered Sharknado’s answer to Robert Shaw’s Indianapolis monologue about How She Got That Scar.)

SUGGESTION BOX: Beats to hit in the inevitable Sharknado sequel:
• Viewers are peppered with ads for Joe Rogan’s new Syfy show, yet Rogan appears nowhere in the film. What makes Rogan think he is above Sharknado?
• Sharks swim by the protagonists’ vehicle at one point, but the filmmakers miss an opportunity to set up an origin story for the Hurricane Irene hoax.
• At no point visible to the viewers does a shark swim into a submerged vehicle’s tailpipe to lay eggs.
• Absence of a post-credits stinger introducing the Sharknado Sway, a new dance craze in which teens twirl hula hoops about their hips while ripping their dance partners limb from limb and feasting on their flesh.