Sesame Street Is Heading to the Big Screen 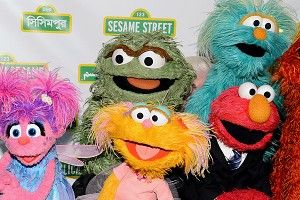 Good news, people nostalgic for their TV youth: THR reports that 20th Century Fox is at work on a Sesame Street movie, to be written by longtime show writer Joey Mazzarino and produced by Shawn Levy’s 21 Laps.

This isn’t the first time the Street will be on the big screen: Two feature movies have been churned out since the show debuted in 1969: 1985’s Follow That Bird and 1999’s The Adventures of Elmo in Grouchland. For this next one, though, I’m thinking a bit of a brand makeover might be in line. Over the last few years, The Muppets have stolen most of the hip Hollywood “beloved children’s entity involving puppets” shine, thanks to their Jason Segel–engineered reboot and that Oscar win for Bret McKenzie’s song “Man or Muppet.” (A sequel, albeit without Segel, is now in the works.) So isn’t it time the kindhearted folks and animals at Sesame Street got the same treatment? To get there, we’re going to have to dramatically shake things up. (I mean, come on, in the new Muppets, one of the Muppets had an iPhone).

OK, so what should the revisionist approach be? The dark origin story — how did everyone get to Sesame Street? Was there black magic involved? — would have been the obvious choice just a few years ago, but, with The Dark Knight Rises imminently wrapping up Christopher Nolan’s Batman franchise, it’s mostly played out these days. OK, just gonna throw out some ideas, then: Sesame Street in a postapocalyptic future wasteland, staving off zombies as the last bastion of goodness? Avant garde Sesame Street, set in an alternate universe, where Big Bird and Elmo and the gang are all played by sad Big Bird-and-Elmo-y looking humans? M. Night Shyamalan’s Sesame Street, where a dramatic third-act twist ending reveals the whole thing to really be more of a Sesame Avenue? Feel free to steal any of these ideas, Joey Mazzarino.

Hollywood Prospectus Podcast: The Killing, Girls, The Master, and Drake