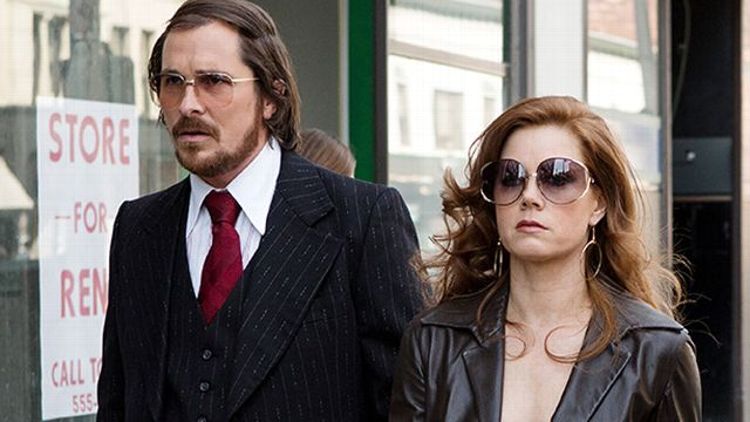 Coiffure is the unbilled star of American Hustle. The baroque late-’70s hairstyles accentuate each characters’ personality and provide an exclamation point to every joke. Richie DiMaso (Bradley Cooper) has a tightly coiled perm that makes his head look like it’s covered in tiny snails, Rosalyn Rosenfeld (Jennifer Lawrence) wears an updo that seems a few beer can rollers short of a six-pack, and Carmine Polito (Jeremy Renner) flaunts a brick wall of a pompadour that gives him an extra foot of height. Central grifters and erstwhile lovers Sydney Prosser (Amy Adams) and Irving Rosenfeld (Christian Bale) tailor their styles to match their scams. Irving wears a scrubby toupee, while Sydney sports a disco version of femme fatale finger waves resembling those of the lady grifters from Preston Sturges movies. She is equal parts Veronica Lake in Sullivan’s Travels and Barbara Stanwyck in The Lady Eve. (The Lady Eve perfumes the whole production; Sydney’s invention of posh British alter ego “Lady Edith” comes straight from its third act.) As the central con starts to spiral out of control, Sydney’s hair becomes bigger to match her rival Rosalyn’s, flaring up into a Bernadette Peters megaflora for the night when the two finally lock horns.

Russell channels the Depression themes of screwball comedy all through his modern recession fantasy, filtering it through the oiliness of late-’70s New York. The obvious inspiration here is Scorsese, particularly Goodfellas and Casino, but Hustle is less New Hollywood than it looks. Russell shares Marty’s love of Hollywood golden age films, right down to the tacked on-ending that wraps everything up, but his technique remains rooted in ’90s independent film. The characters and their dialogue never take a backseat to the aesthetics — he’s most interested in nailing the perfect zinger with the right mixture of spontaneous naturalism and ceremonial style. He avoids the failures of countless others (even the Coens) in their attempts to replicate the beloved screwball style. The rat-a-tat patter so strongly associated with the genre is not actually the key. In bad imitations of screwball dialogue, the quick rhythms imply the existence of punchlines where there are none, which is where Aaron Sorkin’s The Newsroom goes so wrong. Instead, Russell replicates the loopy loucheness of classic screwball comedies, wisely following the spirit of the law instead of the letter.

Despite the period setting that places it firmly in the heart of American New Wave, Hustle is traditional in the best sense of the word. There’s a love triangle that mirrors George Cukor’s The Philadelphia Story. Adams’s Sydney is the blithe spirit caught between a known rogue of inestimable charm and a saintlier (if no more sane) challenger, with Cooper as her Jimmy Stewart and Bale as the Cary Grant. Cooper plays the more wholesome rival like a guileless Ralph Bellamy character, with era-appropriate touches; a coke spoon, a five o’clock shadow, and a perennially half-unbuttoned shirt. It is a heist movie in which every single character steals a few scenes.

Bale proves that if he ever wants to come back to the Batman fold, he’d make a great Penguin, and he’s somehow more charismatic and sexy as the balding con man with a huge gut than he’s been in years. Jennifer Lawrence is brassy and commanding as Rosalyn, Irving’s jilted wife, a manic cartoon squirrel with a nail fetish. (More than once I thought, This is exactly what I imagined the young Livia Soprano to be like.) Bradley Cooper is the perfect leading man for David O. Russell, a conduit for all of Russell’s manias and neuroses. He understands exactly when to start yelling and when to stop, playing the pauses just as beautifully as the jokes. He does a silent riff toward the end of this movie that made me laugh so hard I spit up soda. Amy Adams is coquettish while also believably tough as nails, all accomplished in dresses cut down to her navel. The wardrobe never outacts the actors, which is really remarkable because the wardrobe is unreal. If you like tacky glamour, you will be enchanted by this movie, which is swimming in big hair and low necks.

And then there’s the music. The actors glide through one lush ’70s cue after another, sometimes lip-syncing as they do. Russell holds back from staging a full-on number, but why? A musical interlude would nudge Hustle toward being an even less categorizable genre, a valentine to the groundbreaking ’70s films that were valentines to classic Hollywood. Scorsese’s New York, New York paid homage to the future of film by exploring its past, as Scorsese strove to reconcile his angry iconoclasm with his sentimentality, paving the way for 1980’s masterpiece Raging Bull. You can sense a similar alchemy happening here with Russell; he masters the directorial tricks that allow his dialogue to catch fire. The humor is heightened by the sexual atmosphere. It is genius to pit Bradley Cooper against Amy Adams in the arena of crazy sex eyes, as both have become the undisputed title holders for their respective genders in years past.

Also: Don’t underestimate the gorgeous ugliness of the late ’70s in East Coast America. In the early ’80s, the ’70s were still underpainted under everything. There were remnants of this older civilization everywhere; gaudy lurex, the deep tans beginning to take toll, wood-paneled everything. As the long hangover from the punctured ’60s dream, the ’70s were a cynical, depressing time, culminating in Watergate. In ’78, the Hillside Strangler killed his 10th victim, the Peoples Temple cult committed mass suicide in Jonestown, Roman Polanski fled to France to avoid prosecution for raping a 13-year-old girl, and one of the original Flying Wallendas fell off of a tightrope and died. The first legal casino also opened in Atlantic City, which is the incident American Hustle treats as its Argo project, freeing it from historical accuracy and into the realm of pure filmic fantasy, weaving high-art thrills into pure popcorn like the best ’70s blockbusters.

Music also figures heavily, although some of the cues faded so quickly it actually made me mad. Who turns down Steely Dan’s “Dirty Work” right when it’s going into the chorus? The movie was long already, but I would not have minded if the montages went much longer than they did. But this movie has a Duke Ellington heart. It’s not really about the ’70s, or any era in particular. It’s about the weird nuances of chemistry between lovers and friends that spring eternal in any time period, like every Russell film. American Hustle nudges David O. Russell ever closer toward making a full-on Hollywood musical, and we’ll just have to hope he takes the bait. He already has Amy Adams and Bradley Cooper, who demonstrate their dedication to dance in a glorious disco club scene. Richie’s face shines with childlike enthusiasm while he dances, which Sydney attempts to mirror without cracking up. Both characters would probably have seen Saturday Night Fever. Like Tony Manero, Richie is not quite the golden-hearted fool he seems to be at first, but he’s not all bad, either. Everyone is a complicated structure, just like their hair.