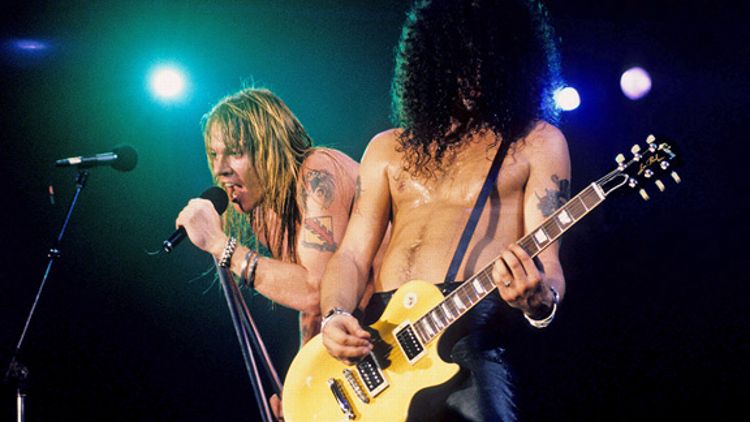 In September, when the Rock and Roll Hall of Fame announced its short list of nominees, Grantland beseeched the institution’s voters to band together and do the right thing: choose nominee Guns N’ Roses. Not because doing so would finally bring attention to Dizzy Reed’s dazzling piano solo on “Estranged” or anything like that; if you don’t already appreciate the wonder and majesty of GNR, it’s unlikely the Hall’s nod of approval will change that stubborn, twisted mind of yours. It’s just that an induction would mean an appearance at the induction ceremony, and that would mean a high possibility for an awkward on-stage reunion for sworn enemies Axl Rose and Slash. (Best case scenario: they make up and announce a 47-date reunion tour. Second best case scenario: face-punching). Well, the the 2012 inductees were announced this morning, and guess what? Guns N’ Roses is in!

Back to the important stuff: So what’s the likelihood that the original members of Guns N’ Roses actually show up? Presumably they’ll all be invited, meaning it’s up to the individual rockers to decide if this is really worth a trip to Cleveland. More likely, though, the organizers will send out feelers ahead of time to figure out just how bad things could get if the embittered factions are all in the same room. It’s not out of the realm of possibility that Axl decides the induction is due just as much to the Chinese Democracy-era and commandeers the situation to make sure that only his new crew gets up there. As some diehards like to point out, much of GNR 2.0 has actually been around for longer than the band’s original lineup. (One way they might point this out to you is via a furiously angry comments thread on a positive live review you wrote. Other comments they might leave would include “AMOS BARSHAD: NOBODY CARES GO WORK AT PEREZHILTON WEBSITE GO CHECK OUT HANSON OR JONNAS BROTHERS” and “Uh… nerd alert… table for one.”)

Then again: as the Hollywood Report suggests, recent comments from the principals involved are almost promising in their non-mean ambivalence. Axl: “I don’t know what it means in terms of me with the old band and the old lineup. If we were to be invited, I don’t know what they would ask of me. It’s up in the air.” Slash: “With Guns ‘N Roses, there’s really no guessing exactly how it will go. I suppose if it happens, everybody will get some sort of ducks in order.” That sounds easy enough! And if complications do arise, Slash, just know that I recently paid $6.93 dollars for your autobiography (also called Slash), and I feel that you should work through those complications because maybe owe me just a little something in return?

Previously: Can the Rock and Roll Hall of Fame Reunite Axl and Slash?