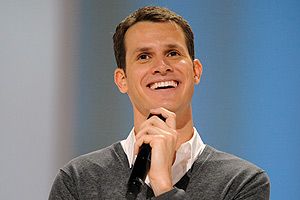 When Rob Dyrdek and MTV launched Ridiculousness last year, fans of comical shows constructed out of crazy web clips might have noticed that it was an extremely shameless ripoff of Comedy Central’s Tosh.0, but it didn’t matter much: Tosh.0 is consistently one of the cable channel’s highest-rated shows, and Ridiculousness is never mentioned or watched by you or anyone you know. Daniel Tosh has made the odd joke about the striking similarities between his show and Dyrdek’s, but none have been as direct as in the latest episode on Tuesday, in which a Web Redemption for a skateboarder hit by a truck winds up in a facility very similar to the titular setting of a previous Dyrdek show, Fantasy Factory. Though Dyrdek’s name is never uttered, Tosh dresses in Dyrdek’s signature style while presiding over a platoon of shirtless preteen boys and plying them with booze and foam machines.

Though Tosh probably doesn’t watch Ridiculousness, Dyrdek evidently watches Tosh.0, and is none too happy with his portrayal. In a series of angry tweets (which Dyrdek has since deleted), he reasons, “I am not a comedian or an actor so unfortunately for @danieltosh we are going to have to settle this the old fashioned way.” Tosh has responded with amusement: “fair enough but if you have to beat me up, can we film it and put it on my show so people will actually watch it?”

Today it seems as though Dyrdek has reconsidered his position: “Truly embarrassed … for real … embarrassment at the highest level … ‪#liveandlearn‬.” Beef called on account of good sense! Instead, let’s turn our attention to the ongoing battle between Stephen Baldwin and Kevin Costner.

Jamie Foxx Might Be the Latest Fictional Black President Under Siege

Your Sister's Sister's Mark Duplass on the Secret of His Productivity: 'I'm a F---ing Maniac'