Jamie Foxx Might Be the Latest Fictional Black President Under Siege 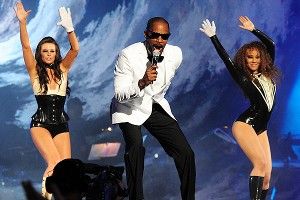 If it wasn’t utterly dumbfounding, it’d be almost comforting in its predictability: a black actor gets cast as the President of the United States in a movie, and that movie’s plot line inevitably involves the world going to hell.

Next up is Jamie Foxx, who’s in negotiations for White House Down, a Die Hard–style thriller in which Secret Service agent Channing Tatum has to stop a paramilitary group from taking the president and everyone inside his home hostage. (Foxx, who is still wrapping up shooting on Tarantino’s Django Unchained, hasn’t officially been made an offer, but Variety reports that the outcome looks promising.) Technically, this is a step forward for black presidents on film: Unlike his notable predecessors — like Deep Impact‘s Morgan Freeman, 2012‘s Danny Glover, The Fifth Element‘s Tiny Lister, or The Event‘s Blair Underwood — Foxx will have neither cataclysmic natural disasters nor mythical end-of-days scenarios nor aliens to contend with. Instead, he’ll be put in more of a Harrison Ford in Air Force One type of situation, with a whole roster of vaguely accented, machine-gun wielding goons being no match for the POTUS’s surprisingly incredible hand-to-hand combat situations. (Related: Have you seen Air Force One recently? No? Go do that. It’s awesome.) But still — Foxx, exactly like said notable predecessors, won’t get to do any regular humdrum Prez stuff, like shaking hands with strangers or signing forgettable bills into law. In between karate-chopping bad guys to death with his shirtsleeves rolled up and his tie loosened while turning through the Lincoln bedroom back-to-back with Mr. Tatum (one assumes; I haven’t actually gotten a copy of the screenplay or anything), how would he find the time?

In the fall of 2008, Slate took a look at the history of black presidents on film and noted that they’ve “most often existed in science-fiction scenarios, lending a futuristic tint to the proceedings.” That was a few months before Obama’s inauguration. Fast-forward almost four years, and we seem to be in exactly the same boat: For Hollywood to consider a black president realistic, they have to tack on some alternate-reality disaster scenario. Odd, right? And while it’s too late for White House Down, hopefully the next time a black actor gets cast as president in a movie, he won’t have to fight off paramilitary organizations, aliens, or even one tidal wave.

John Mayer Has Feelings, Too ... and Other Absurdities From This Week's Tabloids