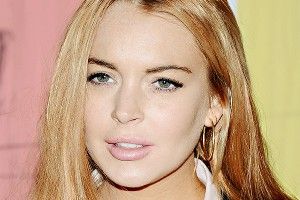 For a long while there, Lindsay Lohan’s burnout was exclusively depressing: predictable, repetitive, and, outside of a few courtroom fingernail messaging incidents here and there, just plain uninspired. Things, however, just got a touch more interesting. Hours removed from her messy Porsche wreck (the latest word from TMZ is that Lohan might have lied to the cops when she said she wasn’t driving, an offense that could get her probation revoked), a juicy new role for Lindsay has been announced.

“At 5’8″ and 26-years-old, Mr. Deen is slight of build, fresh of face, and looks like that cute boy from your high school Spanish class. A little bro-y, maybe. Sophomoric, definitely … He could be your boyfriend, if your boyfriend knew his way around a ball gag and just when to pull your hair … Online, his teenage fans tweet and tumble and make gifs about his devastating eye contact — even as his co-stars lie bound and gagged at his waist. ‘There are these weird long flashes of tenderness that you don’t really see in straight pornography,’ noted Mr. Ellis.”

By the way: “the film, [Ellis] said, will feature explicit sex scenes, but purely in service of character and plot development.” Character and plot development — of course, of course. Hey, remember when Lohan posing semi-nude in New York Magazine was a big deal? And then remember when Lohan continued to drop ever more trou for Playboy? Things certainly do keep on progressing in this arena of her life, don’t they? (By the way, if you’re having trouble keeping track of Lindsay’s porn-world dalliances: James Deen is not the porn star who claimed to have slept with her while her father was upstairs. That was Voodoo.)

Adding some legitimacy to the operation is its director, Paul Schrader, who’s both written (Taxi Driver, The Last Temptation of Christ) and directed (Affliction, American Gigolo) some stuff you may have heard of. But then making it all weird again is the fact the movie is partially funded by a Kickstarter campaign, one that closed three days ago after managing to pull in nearly $160,000. If you pledged $10,000, you got a personal item of Schrader’s. In the Kickstarter video, Paul explains: “It’s a money clip that I got 35 years ago. It says Taxi Driver … has a picture of it, checkered … and on the back it says, ‘To Paul, many thanks, Bob De Niro.’”

Tweeting about the announcement today, Ellis declared he “could not have dreamed of a better cast. Lindsay nailed it … ” But you would be excused for believing here that perhaps the young lady didn’t so much “nail it” as she “continued being Lindsay Lohan.” Landing Lohan in this experimental flick, and pairing her with Deen, is primarily a win for Ellis: Whatever the final result of The Canyons ends up being, at least people will be paying attention. But in a best-case scenario, this will be a win for Lohan, too. She’s now at the burnout stage where she’s getting squeezed into unorthodox, risky movie choices. Let’s hope one of them pans out.

The Robins Return: A Guide to the Lost Footage of Blue Velvet