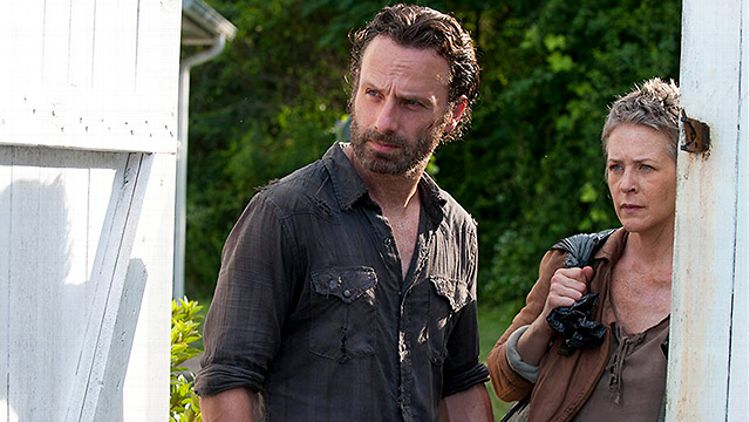 Forgive me for going all Dangerous Minds for a second, but I once had a brilliant teacher who taught with a hard-boiled idealism and alcohol tolerance more often found in Dashiell Hammett novels than in real life. Not surprisingly, some overprotective parents got the teacher axed. As such, this week’s The Walking Dead stirred up some long-buried feelings of sadness as it sent another maybe-unhinged-but-damn-compelling character into the wilderness. Yes, I’m talking about Carol.

Even if you don’t agree with Carol’s stance on preemptive euthanasia, there’s no denying that she has long been one of the most interesting characters on a show whose other headliners can often soliloquize the viewer to sleep. She went from being a helpless victim of domestic abuse to being a grieving mother to being the story-time drill sergeant teaching wide-eyed tweens how best to shiv any zombie punk that came at them in the prison yard.

This week’s episode followed the show’s new formula, posturing for 45 minutes before issuing a twist of the story blade at the very end. Now Carol has been exiled by Rick Grimes, the ultimate overprotective parent, because she could not satisfactorily answer Rick’s third question: Why? (Specifically: Why did you toast Tyreese’s girl Karen? Oh, and Dave?) Given Carol’s matter-of-fact post-zombie murky morality, Rick clearly got the willies at the thought of her reading his baby girl Goodnight Moon while showing little Judith how to whet a machete. So, like many controversial educators before her, Carol hit the road in a late-’90s station wagon with only some meager supplies and a sleeping bag in the back, which leads to this week’s first question.

Is There Such a Thing As Too Much Empowerment?

After Carol copped to a double homicide last week, Rick had some decisions to make. To drive home his dilemma, last night’s episode opened with Rick reimagining Carol’s crime while searching for spare gasoline. (Bet he regretted wasting all of that gas on his prior symbolic pigpen burning!) Meanwhile, Carol paid a visit to star pupil Lizzie “You Are Weak” Samuels, who slipped and called Carol “Mom,” earning a cold glare usually given by girlfriends in those unfortunate situations. But the real purpose of the Lizzie visit was for the writers to hit the thematic nail on the head: “We all change.” Well, Carol has changed, and Rick’s quandary was what exactly to do with someone who’s been perhaps too empowered by the tragic, catalytic fires of the zombie apocalypse.

So, Rick took Carol out on a dubious supply run, where they ran into Sam and his girlfriend, hippy-dippy lovebirds smiling way too goofily to last long in zombie-ravaged Georgia. Sam had dislocated his shoulder, and Carol employed some abuse-victim insider knowledge to pop it back in; but she could do nothing for the young woman’s lame foot, which would be all that was left of her by episode’s end. Although they answered Rick’s questions satisfactorily, they couldn’t make it through routine supply scavenging. She ended up a midafternoon zombie snack while Sam disappeared god knows where, though presumably in search of a fat blunt. It cost Rick a nice Rolex, but the interlude provided him some quality time with Carol, as they went tomato picking and self-justifying (we all know how much Rick loves his organic gardens and sermons). Ultimately, Carol’s unapologetic stance did little to reassure Rick and, after using Lori’s crappy pancake skills as a metaphor for hope in a hopeless world, Rick gave Carol her walking papers.

Now, this makes a certain sense: Obviously hammer-happy Tyreese won’t take it well once he finds out what Carol did. And I’m sure this isn’t the last we’ll see of Carol. But still, something about all of this felt unworthy; the only thing that would have made it worse would have been Rick writing “Don’t let the door hit you on the way out” in the dust on Carol’s car. But more importantly, the show has shipped off a compelling character and a prime source of conflict before we got to see that conflict blossom. It’s like Walter White stopping the meth cook once he made his $747,000: It might be more rational, but it’s a lot less fun. Hopefully, Carol’s inevitable return will spice things back up. In the meantime, we can all have fun watching Rick explain what exactly happened to everyone’s favorite stone-cold surrogate mom.

Dear Writers: Is Tyreese Hell-Bent on Self-Destruction or Determined to Save Sasha? Please Choose One.

The other story line followed Daryl, Michonne, Tyreese, and Bob Stokey as they fled the mass murder of zombies that initially prevented them from reaching the veterinary college and its much-needed antibiotics. (Tip of the hat to commenter John Huyg, who adapted “murder of crows” to craft that nifty neologism.) Daryl was again chiding Michonne for her Ahab-like obsession with finding the Governor when the group stumbled upon an ivy-clad gas station.

They spotted a possibly usable minivan, but needed to cut through the entrapping vines to get and test the battery. This being The Walking Dead, of course it’s impossible to do basic hedge trimming without the undead popping out from behind the leaves like a cheap Halloween yard decoration. But as the group made short work of those zombies, Tyreese perplexingly flirted with a ravenous walker, much to Michonne’s wide-eyed consternation. She later lectured him on his childish death wish. Although Tyreese’s suicidal gumption makes for some nice zombie deaths, it’s starting to feel a little like a rehash of last season’s “Rick gone wild” arc. Don’t get me wrong: It’s fun to watch Tyreese go Wreck-It Ralph with his trusty hammer, but Chad Coleman’s a fantastic actor, so it would be nice to see him get something more interesting to do going forward than flash crazy eyes.

Meanwhile, Bob Stokey filled us in on his backstory as Daryl fixed their phat minivan ride. When the group found Bob, he had been reduced to senseless alcoholism from watching all the survivors around him get picked off one by one. Even though he avoided falling off the wagon, he blamed himself for Zack’s death in the opener. Daryl gave Bob the “that’s bullshit” pep talk we’ve all come to expect and admire. Still, alcoholism must really sharpen one’s eyesight, because when the group finally made it into the veterinary college, Bob somehow spotted a bottle of Courvoisier buried under some books. (I had to rewind the DVR twice to see what he was seeing.) The group quickly gathered the much-needed medicine and high-tailed it out, fleeing plague-infested zombies.

But then Bob tripped coming out of a window onto a walkway roof, almost losing his precious bag to a horde of walkers below. However, where mere survival instinct might fail a lesser man, Bob’s substance dependency gave him the superhuman compulsion necessary to save the bag and the bottle of Courvoisier hidden inside. Needless to say, Daryl was not pleased, and after the requisite dramatic forehead press, Daryl promised to do very bad things if Bob took a sip before they got the real medicine back to their chums at the prison. It’s always fun to watch Norman Reedus take the show’s more over-the-top moments and make them work through sheer force of charisma, but he was a little hard on Bob. For one, alcoholism is a disease; for another, Bob technically hasn’t fallen off the wagon yet. However, I’m positive we’ll see that sweaty-forehead close-up of dramatic soul-searching and addiction-grappling soon enough.

The hedge zombies at the gas station provided some much-needed pop early in the episode, but aside from Tyreese tangoing a little too long with one of them, that dispatching was fairly routine. Bob stabbing the lone walker remaining inside with the men’s room key was absolutely adorable. The real action came at the veterinary hospital, though. Michonne got in an artful two-fer and a swift side kill with her katana. But this week’s winner was definitely Hammer Time with Tyreese. Caught in a dark corridor by a sole walker, Tyreese swung his preferred instrument of death/psychological healing like an 8-bit Thor: one, two, three, dead. 500 bonus points!

Alas, Carol’s nonlethal departure filled the sayonara quotient this week, and so I was ultimately wrong about the massive body count — though we are down one series regular for the time being. Still, Lizzie’s words at the top of the episode — that a bunch of people are going to die, because that’s how it always happens — seem like a prophetic mash note sent straight to viewers from the mass-murdering writing staff. So I would expect a plague-inflated death toll next week that could include a major character. (Dr. S, you might as well put a down payment on a tombstone.) However, I’m now inclined to officially remove Bob Stokey from the Death Watch, at least for an episode or two. After all, even a drunk can walk away from the grandest of catastrophes.