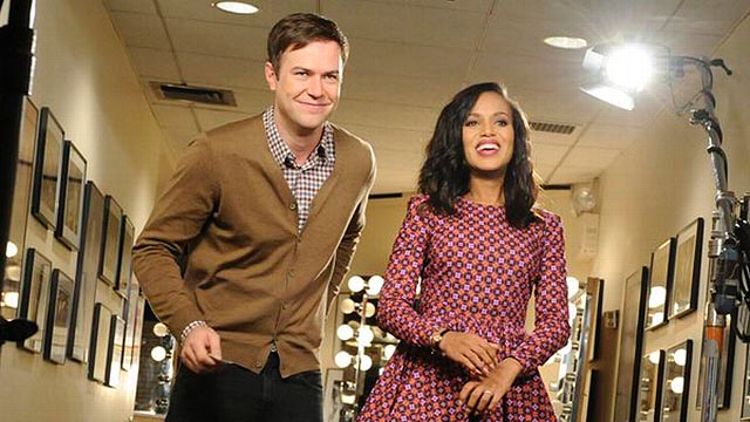 Responding to critics is never easy to do, nor is it often advisable. Sometimes it’s better to ignore your detractors, or to change your behavior instead of getting caught up in a conversation about whatever it was you did that offended them in the first place; other times, the people yelling at you are making some good points, and you really have no choice but to answer them. Saturday Night Live has caught a decent amount of heat this past season for continuing to resist diversifying its cast, particularly by failing to cast a black woman while still keeping six white men in the ensemble, and finally found itself in the position of deciding whether or not to chime in. Kenan Thompson and Jay Pharoah have offered different takes on the problem, with Thompson unpopularly claiming that the show has failed to find more people, especially women, of color who are “ready”, while Pharoah seemed more into the idea of looking around a little bit harder (and suggested Darmirra Brunson). When Kerry Washington was announced as a host, it was reasonable to assume that we could finally see Michelle Obama appear in a sketch and that — just maybe — the show would address the controversy, but I didn’t expect that we’d get a scrolling-text PSA about it.

Lorne Michaels called adding a black woman to the cast a “priority” in an AP interview last week, which I certainly hope it is, especially after Washington’s episode. It wasn’t just that she was funny and poised and showed her range, but that the constraints of approaching material without a female person of color had been temporarily lifted. The fact that we’re having a conversation about it is good, but the need for that conversation is disheartening.

Anyway! On to the show. Little time was wasted in the Oval Office with Pharoah’s Obama before Kerry Washington appeared as Michelle. “I feel like it’s been years since I’ve seen you,” deadpanned Pharoah, but he wouldn’t get to hang out with his wife for long because — surprise! — Oprah also had plans for a visit. And to Washington’s dismay, Kenan wasn’t willing to play her, so off she went to wardrobe as the aforementioned PSA scrolled across the screen apologizing in advance for all of the black women she’d have to play and promising to alter the cast “in the near future” (“unless of course we fall in love with another white guy”). Oprah entered, hollered, and panted because that was a quick wig swap, then Washington exited to change into Beyoncé clothes. We all got the point, so there was no need to actually bring her in. But just in case it wasn’t enough for us critical bloggers to know that SNL had heard us loud and clear, six Matthew McConaugheys paraded onto the stage drawling all right, and then the real Rev. Al Sharpton (lookin’ slim!) asked us what we had learned (and answered himself, “as usual, nothing” before delivering “Live from New York, it’s Saturday Night!”).

That was a lot to digest, so Washington’s monologue felt very light. This was the only screen time devoted to Washington’s Scandal character, Olivia Pope (I was also personally distracted by covetous feelings for her cute dress), which is kind of weird considering how buzzy Scandal is. Due to the length of the good-byes at the close of the show, I wondered if maybe a Pope vehicle had gotten the ax somewhere along the way. The cast approached Washington with their problems in the hopes that she would fix their reputations for sins like using the phrase “in da club” (that would be Bayers, and I think it really was more like “de club”). The next sketch cast Washington as Tami, the assistant to Yemeni motivational speaker Heshi (Nasim Pedrad), at a high school career week assembly. This was prime Pedrad, who had choreographed her hips and fists perfectly with an array of sound effects (lasers! Machine guns! Laser machine guns!) computerized by her son (Mike O’Brien). Heshi is jazzed to be a 44-year-old woman with a Honda Prelude, and her tips (self-confidence, having a computer, and power) for self-improvement also hopefully will lead us all to achieve her special power: punching the sky and making a noise come out of it. Washington’s hips summoned laser noises, too, and she stole the scene from Heshi when she commanded her to “respect [her] ability to assess a bucket.”

Ylvis’s “The Fox (What Does the Fox Say?)” is already sort of a parody, but that doesn’t mean it’s exempt from further fun-poking. “What Does My Girl Say?” worked better than I expected, with Washington and Pharoah playing a couple bickering over her tendency to snoop around his personal electronic devices (look, if “he forgot about the cloud/and his cloud is full of butts,” spying is justified). The next sketch, “How’s He Doing?” was an almost eerie replica of one we saw when Maya Rudolph hosted in February 2012 (refresh your memory with this totally shitty capture): The hosts both played university professors (Pharoah appears next to them in both sketches) answering questions posed by Thompson about Obama’s dipping approval ratings. This is a hit-or-miss sketch, but it’s also a good example of a one-joker that sneaks in more than a few gems, like white people’s obsession with The Wire (and recapping it online) and their mailmen (“How good is the mail they must be getting?”). I saw some people in my feeds take offense at the next skit — a Miss Universe pageant that hit developing nations with a boa-wrapped hammer — but I have to admit that I was charmed, as always, by Kate McKinnon’s hard-knocks character, in this case Miss Bolivia (who wore a cocaine mustache), and I loved Washington’s Miss Uganda and her aggressive confusion at her surroundings (“What is dees? Dees is not right”; “I get here on my own. I KEEP DRESS”).

And now I must carefully approach the topic of Eminem, who performed “Berzerk” and then “Survival,” from The Marshall Mathers LP 2. I love Eminem, I really do, but there was something fishy about both performances that left people wondering if he’d been lip-synching. SNL has had terrible audio issues for the past few years, so maybe Eminem and his crew, including Rick Rubin DJing during “Berzerk” and Skyler Grey guesting on “Survival,” were just adapting to a bad situation with a supporting vocal track. Who knows? Eminem’s energy was great, however, and he looked very cozy in his parka.

Three guests stopped by the “Update” desk: German Chancellor Angela Merkel (McKinnon), Charles Barkley, and Shaq (Thompson and Pharoah). Merkel was the best, because who knew she was just a lonely lady who was ashamed of what the NSA would find on her “mobile” (those “tiny umails,” otherwise known as texts, sent to her ex-boyfriend Friedrich) and in her Google history (Nickelback tour schedule, Jason Segel no shirt)? Pharoah’s Shaq has been practicing his eyeball choreography, and now they cross and wander like unsynchronized swimmers. It must hurt, and I am very protective of Shaq, but I was transfixed.

While “Cartoon Catchphrase” wasn’t my favorite materialwise (game-show spoofs can be tricky, and always seem to go on too long), Washington stepped up to the plate with some on-point host cadence and friendly, yet sort of cold, demeanor. Aidy Bryant got to shine (as she has increasingly this season), asking if her philandering husband, Duane, whom she phoned for a tip, was going “door to door and ass to ass,” but beyond the performances I could have skipped this one. The same goes for another installment of Booker T. Washington High and its principal, Mr. Frye (Pharoah), which I would be happy to send into the comedy graveyard forever. However, I loved Washington here: As Miss Cherry, a teacher wearing a rainbow wig and sentenced to the dunk tank, she entered the skit as an enthusiastic Long Islander and closed it as a sodden shell of a person, reduced to calling her students “little ass biscuits” for pelting her tank target with Snapple bottles.

“MTV’s Date or Diss” was an adept way to use the same formula from the Swarovski Crystal Girls sketch — just a couple of ladies starting out strange, then getting stranger with every line — without depending on a tranq-zonked, bedazzled infrastructure. Taran Killam played the eligible bachelor (his line “I’m German, which means my mom’s a great cook” made me laugh), shopping the female goods procured from a local Ross (Bryant, Cecily Strong, and Washington), who were prepped by being fed lines before the picnic date. While Strong’s Britney B. has chronic bleeding teeth and Bryant’s Britney R. wears the “If I’m tickled, I dump” badge of honor, Washington’s Nichelle — oops, Michelle — boasts that she has a “bush that goes all the way around,” and props to Washington for allowing that line all the punch it deserved (also, I must shout out the spin-off “Bitch Apartment,” the still from which featured a sombrero-wearing, topless Bryant about to get clocked by an also-topless Strong).

The show closed with a bizarre digital short, which of course I loved, being a fan of bizarre things in general. “Ice Cream” didn’t push hard for jokes, it just slowly melted on your tongue like a Cherry Garcia–flavored acid tab. Kyle Mooney played a scooper whose brain was scrambled by a customer’s sugar-coma joke (a confusion that was, apparently, contagious), transporting him into a dream world where he flipped through library card catalogs and cuddled Killam on a dock. Maybe it was secretly about brain freeze? Whatever it was, I liked it.

This was a strong show, mostly because Washington was a great host. She was adaptable, with each of her characters having their own unique energy — maybe refusing to touch on Scandal was just an excuse to show us how many things she can do. She was visibly well-prepared and didn’t lean too much on the cue cards. It’s a shame that you can’t talk about this episode without acknowledging the subtext (or scrolling text) of its controversy, because Washington’s performance should have been the single focal point, but it was an important step for SNL to admit its shortcomings and limitations. Now the only thing left for it to do is to follow through.