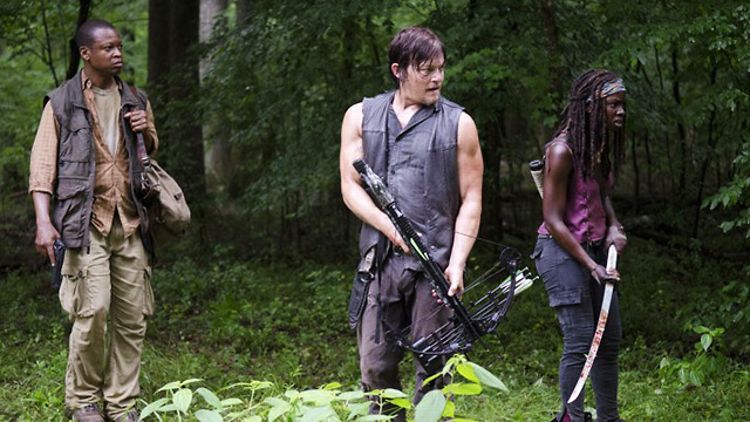 One of The Walking Dead’s incidental pleasures — a thrill totally independent of plot progression or body count, both of which were on the low side last night — is that it helps us appreciate all the little perks of civilization we might otherwise take for granted. I’m not even talking Louis C.K.’s marvels of air travel. Take Theraflu, for example. What wouldn’t Glenn or Sasha (or the nameless day-player carrion the writing staff have sacrificed to the zombie influenza) have given this week for some boiled water spiked with acetaminophen? Instead, all they got was Hershel’s homeopathic elderberry tea, which, much like Beth’s flinty pep talks, really doesn’t cut it while coughing up your own lung and staring from the dirty window of a prison quarantine block at the graves you dug that morning.

And so, the H1Z1 virus hit full pandemic level this week as Rick and the Jedi Council tried futilely to contain it, accomplishing little more than pissing off Tyreese and giving him a black eye with which to accentuate his Jake LaMotta–style tantrums. Of course, it’s hard to blame Ty; what would you do after seeing your no. 1 OkCupid match burned to a crisp? Unfortunately, Rick and Daryl have the comforting touch of high school guidance counselors, so the trio quickly fell to melodramatic fisticuffs in tonight’s opener. Like any grieving Law & Order boyfriend, Tyreese simply wanted a little rage-fueled vengeance. Is that so much to ask? Instead, he got a fist full of Rick. But if Rick thought he’d bury that hatchet with little more than a sprained wrist and an awkward bro-pology, Carol had quite a surprise in store for him, which leads to the first of this week’s Three Questions.

I admit I was slightly disappointed that some chameleon-esque psychopath wasn’t behind the human flambé. But once I got past that, and my slight incredulity at the logistics of it all, I must admit that having Carol be responsible for Karen’s death (and, oh yeah, Dave’s) is a bold call. Granted, given her little kindergarten cutlery classes, we could tell that Carol had perhaps taken the ruthless pragmatism thing a little too much to heart. I mean, she practically shoved Lizzie into quarantine as the sickly child begged her for a bedtime story. And my eyebrows were raised at Carol’s uncharacteristic attack on the watercooler after Tyreese asked her to watch over Sasha while he joined the world’s most dangerous CVS run with Daryl, Michonne, and Bob. But still. For once, Andy Lincoln almost underplayed the look of shock on Rick’s face as Carol copped to the double homicide and we cut to the credits. That twist alone mostly made up for another slow boil of an episode that took almost 40 minutes to get its rescue posse on the road after all the heart-to-hearts and dramatic lip quivering.

What has me most excited is not so much the moral debate over Carol’s actions (which I really hope doesn’t spark some Hershel pontificating). After all, I think we can all agree that Carol’s overzealous attempt to stop the outbreak is like that obstruction call in Saturday’s World Series game: technically correct, but a horrible way to end things. What’s fantastic is the prospect of irresolvable conflict between everybody’s favorite surrogate mom and Tyreese, who can apparently take out any arbitrary number of zombies if the trauma’s raw enough. And that’s not to mention how the knowledge of Carol’s crime is going to mess with Rick’s fragile, post–pig farming psyche. For the first time this season, I have no idea where the story’s going, and I like that.

Will We See the Return of Future Serial Killer Carl?

After pulling the old Opie-and-Andy routine with his dad in the season’s first couple of episodes, Carl finally showed some flashes of adolescent anger when Rick ordered him into preventive quarantine (along with Judith “Lil’ Asskicker” Grimes and babysitter Beth). But before we could set the over/under on how many hookers adult Carl would keep chained in his basement, young Carl ran into Hershel, who had just made history by becoming the first person ever to be motivated by a motivational poster; he was sneaking out of quarantine to pick the aforementioned elderberries. So, berry picking they went, and despite spotting two slow-moving zombie targets in the woods, Hershel kept a lid on Carl’s itchy trigger finger, telling him only to shoot when necessary. Sigh.

Hershel’s reward for keeping Carl from a steep backslide into depravity? Well, (a) a grandiloquent soliloquy as he explained to Maggie and Rick why he had to risk his life to serve elderberry tea to their sick comrades, quickly followed by (b) a bloody sneeze to the face from Dr. S, which meant Hershel could give Glenn his patented anti-despair bromides unencumbered by that pesky handkerchief over the mouth.

What’s the Proper Term for a Shit-Ton of Zombies, Anyway?

While Sasha, Glenn, and the other prisoners we abstractly care about succumbed to zombie flu — and Maggie succumbed to Beth’s iron-stiff upper lip — Michonne, Daryl, Tyreese, and Bob eventually hit the road in search of antibiotics in the late Zack’s sweet ride. (Not until Tyreese had uni-glowered at everyone he suspected of Karen’s murder, though; and not until Daryl had a little heart-to-heart with Michonne about all the time she spends scouring the countryside for the Governor.) They didn’t quite find that veterinary college filled with miraculous antibiotics that Hershel had sent them after, but they did come across a functional FM bandwidth, which caused Daryl to plow straight into a gaggle or pod or death-horde of zombies. Seriously, does this have a name? If so, I promise to use it later.

Anyway, caught in a corpse-slick, Daryl, Michonne, and Bob quickly fought their way to cover by means of crossbow, katana, and wide-eyed, trembling gun. Tyreese, however, decided to pout a beat before making like an ADHD 13-year-old given a foam bat by his therapist. One plus of the zombie apocalypse is that a guy like Tyreese can take a hammer to as many zombies as he needs in order to get over raw, throbbing emotional wounds.

Despite that milewide zombie mosh pit outside the veterinary college, the zombie kills were particularly sparse. Even Carol’s machete jammed on a measly single walker when she disobeyed Rick and went outside the fence to fix the prison’s plumbing. So, runner-up goes to Tyreese’s zombie-braining binge, if only for the sick numbers he posted. But the real winner is the rear-wheel drive of Zack’s muscle-car: Nothing like tire tread ripping off a Walker’s face to sate your undead bloodlust.

As expected, the writing staff checked its deadly urges this week, so I fully expect it to double down for Episode 4. After all, last year’s fourth episode was “Killer Within,” which brought the long-yearned-for but very unexpected death of Lori. So, I’m looking at you, Quarantine Block: Dr. S is almost certainly a zombie-goner. The only question in my mind is whether he snacks on Sasha, Glenn, or Hershel, or if the flu gets them first. I doubt Steven Yeun’s days of gracing Conan’s couch are over yet, so if a series regular has to go, it could well be Hershel. Or if the writers are feeling merciful, it might just be a twofer: Sasha and Carol’s favorite “weak” child, Lizzie. Honestly, the abundance and configurations of potential worm-food are daunting. After all, The Walking Dead is the only show on TV in which killing off an adorable, blonde-haired child could be considered a cop-out. So someone will die next week, and my guess is, it’s going to hurt.