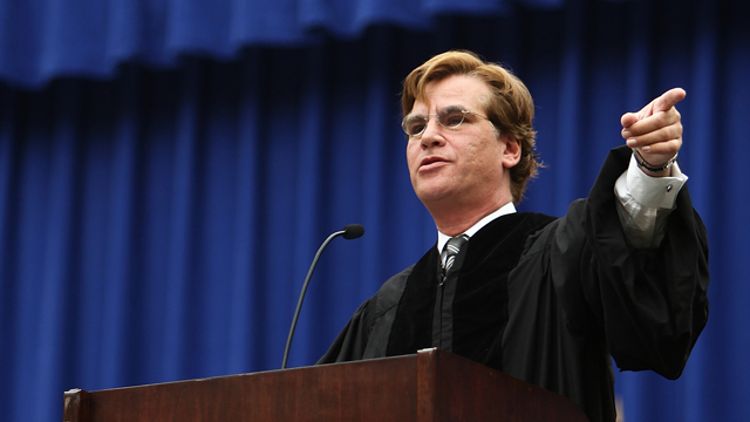 The Newsroom, Aaron Sorkin’s slick instant nostalgia machine, returns to HBO for its second season on July 14, ready to tackle the barely remembered news stories of 2012. (Can you imagine? They didn’t even have Vine yet!) I wasn’t a fan of Season 1 and I wasn’t alone — a fact made abundantly clear by The Hollywood Reporter’s juicy cover story set behind the scenes of the show. In fact, the piece, written by Lacey Rose, is itself downright Sorkiny, with its focus on stern executives, a self-generated crisis, a neurotic creative, and a bizarre blend of apple-cheeked optimism and deeply aggrieved victimhood. Sorkin, the piece says, “is particularly drawn to the dynamic between lawyers and witnesses.” So, herewith, we render verdicts on the article’s six most fascinating pieces of evidence.

1. Regarding last year’s headline-grabbing putsch, in which Sorkin reportedly fired his entire writing staff, the workaholic witness says, “Experienced writers are not going to want to work here because they’re not going to get to write. So I’m bringing in people who think this is a paid apprenticeship for a year or two.”

This strikes the court as tough, but fair. Sorkin isn’t the only control-freak creator on TV — Matthew Weiner and David Kelley would say hi but they’re in line for their ninth espresso — and at least he’s now being honest about using his writing staff the way a handball player uses a wall. HBO probably appreciates it too: When you shell out big bucks for an Aaron Sorkin show, you want Aaron Sorkin writing the scripts, not a pale, MFA-laden imitation.

2. “I doubt HBO’s going to be happy with my telling you this, but I got off to a false start with season two,” Sorkin is quoted as saying. He then confesses that structural problems with the first two episodes — episodes that had already been shot at considerable expense — led him to approach the network bosses, hat in hand, to beg for even more expensive reshoots. He got his way but lost one episode from his season order. (Season 2 will now be nine episodes.)

Verdict: GUILTY BY REASON OF INSANITY!

The court is flabbergasted that any network would indulge a perfectionist like this, but then again, HBO isn’t any network. And when the court is reminded that it’s not the court’s money, the court is actually kind of down with this. If the financials work out for all involved — and the court has to assume that everyone got paid for the full 10-episode season one way or another — it’s always better to see the best version of the story possible. (The irony of needing reshoots on a show that is, itself, kind of a reshoot will be left for another day.) That said, it’s a little nuts that Sorkin isn’t able to take advantage of HBO’s greatest advantage: It’s not its seemingly bottomless pockets, it’s the fact that it encourages writers to finish an entire season’s scripts before shooting commences. (Actually, many cable networks do this, but very few writers are able to pull it off.)

Sorkin actually seems relatable when he confesses “It’ll be my 165th episode of television and I’ve come to realize that it’s only being scared to death that gets it done.” The court knows these sorts of anxiety-driven terrors all too well and is heartened that a multimillionaire with a shelf full of gold statues still suffers from the pressure and difficulty of writing. But, then again, shouldn’t a man with a shelf full of gold statues — not to mention a “Martyn Lawrence Bullard–designed office” — be able to organize his time and manage his process better? But then again, the court is reminded that its editors expected this post to be filed yesterday. The court would like to move on.

3. To beef up the stakes of Season 2 — and hopefully steer clear of the pratfalling, Cosmo-splashing rom-com theatrics that marred Season 1 — Sorkin recruited a murderer’s row of high-profile advisers and consultants, including Hardball host Chris Matthews, former Bush staffer Mark McKinnon, CNN vets Rick Kaplan and Jeff Greenfield, and “two former members of the Joint Chiefs of Staff whom Sorkin declines to name.”

The court would like to do that cool thing where it gavels for order because this, at last, is a good and hopeful idea. It seems that amid all the predictable finger-waving and told-you-so-ing about the Occupy Wall Street movement and the Romney campaign will be an original story with teeth: Jeff Daniels’s blustery Will McAvoy will go hard on an invented Obama administration scandal constructed to resemble the “Tailwind” fiasco of the ’90s. Letting The Newsroom lead the charge on its own invented news — and pay the price for its reckless, crusading reporting — will make the series 1,000 percent more interesting. Nobody likes a know-it-all and last season’s 10-hour corrective on how fictional heroes would have improved on the real work of others was an exercise in patting yourself on the back that felt like a slap in the face. Sorkin may want his characters to be angels but, as The Social Network proved, he’s actually better when he lets them get a little devilish.

4. In regard to The Newsroom’s woman problem — in that it tends to treat them like ninnies — Sorkin is quoted as saying, “In every episode of the show, if you believe that the show treats women badly and that the show is sexist, you can find evidence to support your theory. I just think you can find a lot more evidence that contradicts your theory.”

C’mon, Aaron. The son and brother of attorneys should be able to recognize a pretty lame argument when he makes one. “I just think you can find a lot more evidence” isn’t actually finding evidence. It’s specious and ought to be dismissed. The best way to back up your sworn testimony? Give Emily Mortimer and Alison Pill, your wonderful leading ladies, something to do other than stumbling over the challenges of e-mail and suffering panic attacks that only dashing young men can rescue them from. The court knows you can write strong female characters. The one Olivia Munn plays on this very show, in fact, is a pretty good start.

5. Sorkin — and HBO presidents Richard Plepler and Michael Lombardo — have heard the criticism. They’ve just decided to belittle it. “He had just won the Oscar, and unfortunately when people are riding high, there is that wanting to take them down,” Lombardo is quoted as saying. Adds executive producer Alan Poul, “The extent to which some people were just waiting with knives out was a little bewildering.”

The court passes judgment about things all the time and, believe me, personal animus has nothing to do with it. Why would winning an Oscar for writing a brilliant script for a fantastic movie (The Social Network) make critics anything other than excited for a new series? The court has admired Sorkin’s flair for rat-a-tat banter in the past and has respected his desire to engage not only with the world as it is but the world as he’d like it to be. The court watches reruns of The West Wing all the time, and if The American President is on cable, believe me, the court is not turning it off before Sydney Wade finds love in the Oval Office. The reason the first season of The Newsroom was excoriated by most critics is because it was lousy: hackneyed, smug, and with stakes lower than a limbo pole at a 5-year-old’s birthday party. Dismissing honest criticism with accusations of axes to grind is an easy way to short-circuit debate — and to keep making the same mistakes that got you such a response in the first place.

6. “With a degree of candor that is as surprising as it is endearing, Sorkin will walk you through his routine,” Rose writes. “Take a shower, put on clean sweatpants, try to write; have another shower, put on a comfortable outfit, take a crack at writing; shower again.” Sorkin claims not to be a “germaphobe,” but admits to up to six showers a day.

Dude, Aaron, trust the court: That is way too many showers! Think of the environment! Think of Los Angeles’s fragile water table! Think of the many germs you may actually be luxuriating in! But most of all: Think of your hair! Your terrific, butterscotch hair. Running water over a mane that spectacular so many times a day will dry out the follicles and take away your trademark, zesty bounce. And the day Aaron Sorkin’s hair isn’t as buoyant as his dialogue, well, that’s a day that should live in infamy. I can hear Will McAvoy’s special comment on the tragedy already.

Video on Demand Report: Don't Let the Magic Beans Fool You, Jack the Giant Slayer Is Not for Kids