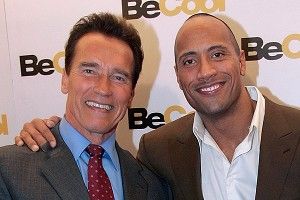 On Thursday, JoBlo.com directed our attention to wrestling site WWE Examiner, which earlier this month unearthed a little rumor about The Rock and the newly confirmed Terminator 5. Word is, The Rock will be missing WrestleMania 30 next April in order to shoot his role on the project, an element of which might be tailored specifically for The People’s Champion. We also get a bit of plot speculation.

According to the Examiner’s source, “Schwarzenegger may not play the role of a machine in the next film, but a potentially heroic human figure in or close to the Connor family. One theory is that Schwarzenegger’s remarkable ability to protect the Connor family in the 1940s or 1950s with antiquated weaponry by today’s standards ultimately inspired the machines to develop a terminator in his likeness that was eventually sent to 1984 when Sarah Connor was first targeted for termination.” And while on its face, that seems to counteract the whole point of the franchise — If you prick the Terminator, will he not bleed? If you tickle the Terminator, will he not laugh? — there’s something to be said for seeing an aged Arnold handling the hell out of a tommy gun.

As for Dwayne Johnson’s involvement: Seeing as he’s been The Sequel Whisperer for years now (note Fast Five: He’s specifically great at showing up during installment numero cinco), and that he’s the closest we’ve gotten to an action star since the ’80s prime, it’s a no-brainer. Now someone clean up Edward Furlong, and we are good to go.

Hold On, Everybody: NOW Kanye and Kim's Baby Has a Name. For Real This Time. Maybe.