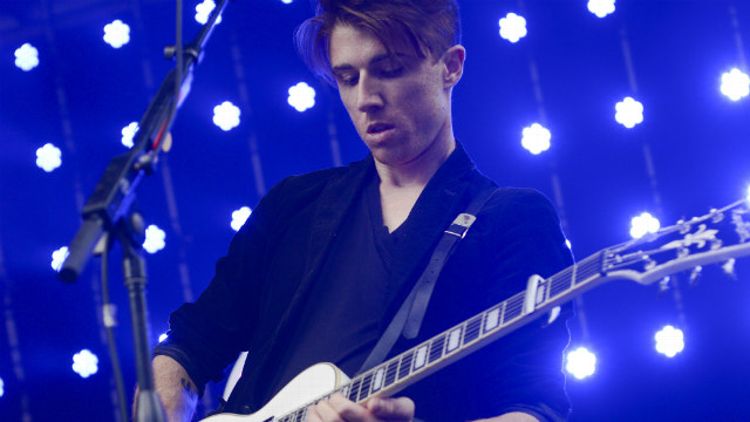 Musician Benjamin Curtis passed away this Sunday at the age of 35, and while his death is certainly a tragedy, it wasn’t a total shock — the founding member of Secret Machines and School of Seven Bells had been battling cancer for nearly a year, with a website (SupportBenjaminCurtis.com) dedicated to raising funds for treatment, while this past August, many of his early-’00s peers (Devendra Banhart, members of Interpol and the Strokes) organized a benefit show in New York City. The nostalgic, “Damn, he made some music that was really good” tone of the condolences wasn’t a surprise; tragedy tends to galvanize opinion in this way. But the immediate and wide-ranging outpouring of the condolences and nostalgia was a surprise, as was the consensus and faintly apologetic nature of it all; people wish they were more adamant about this sadly overlooked and underrated artist in real time.

The fastest way to generate a spirited debate among music writers is to promise an open bar or a discussion about how to gauge popularity in the cratered economy where Billboard charts and radio play don’t carry the same, easily quantifiable power of even a decade prior. For most people, there’s “Internet popular” and “IRL popular,” with the assumption that those two are always out of balance — it’s why this might be the first time you’ve seen a mention of Merchandise if you don’t work for a music publication and why I could even feign shock at Lumineers drawing a crowd about 10 times the size of Grimes’s during the same time slot at Coachella this year. Throughout a career spanning a decade and a half, Curtis found himself in bands that were equally Internet and IRL popular, yet in each aspect, never at the level that people feel the need to make public. Both Secret Machines and School of Seven Bells were critically acclaimed, but usually failed to make year-end lists, headliners that never had anything resembling a hit.

Take, for example, Curtis’s first notable gig as the drummer in Tripping Daisy. If that name sounds familiar, it’s likely due to “I Got a Girl,” a fleeting Buzz Bin hit from 1995 that was equally catchy, grating, and “quirky” in the manner of pretty much all one-off Buzz Bin hits. The cover of Daisy’s I Am an Elastic Firecracker is a visual time capsule of 1995, and Curtis did not play on that record. Not even out of his teens, he joined Tripping Daisy on their follow-up LP, Jesus Hits Like the Atom Bomb, which could’ve been the Dallas band’s answer to The Bends or Clouds Taste Metallic — a pivot where a band with a fluke MTV hit becomes credible at the expense of immediate radio play. Jesus Hits Like the Atom Bomb is something of a lost treasure that you can own for less than a dollar, a substantial, ambitious, and interesting record worth seeking out. But Tripping Daisy quietly faded and were relegated to footnotes — as far as psych-pop oddities with major-label backing, they constantly worked in the shadow of Flaming Lips (The Soft Bulletin was months away) and, later, were seen as merely the predecessor to Polyphonic Spree, the band started by erstwhile front man Tim DeLaughter that redefined “cult act” in a way many of us would probably rather forget.

After Tripping Daisy ran its course, Benjamin and his brother Brandon started Secret Machines, whose ability to achieve even modest commercial success feels, in retrospect, like a huge accomplishment rather than the disappointment heads at Reprise must have felt. At the time of their name-making EP in September 2000, the industry was enamored with retro-minimalist bands like the Strokes and White Stripes, whose influences supposedly wiped out classic rock dinosaurs like Zep and Floyd that Secret Machines unrepentantly embraced. Nonetheless, by the time of their debut, mainstream rock was transitioning out of the nu-rock revival into the unknown (we’d later find out it was Franz Ferdinand, the Killers, and O.C.-core), and Secret Machines were poised to do … something. If anything, Secret Machines are a remnant of a time when major labels could still bank on rock bands as the next big thing, and they were, to a certain extent — it’s just that Secret Machines never appealed to the green Ibanez-owning, Guitar World–reading prog fan that gravitated toward Mars Volta, nor did they aspire to Muse’s nu-Queen operatics.

All the same, nearly every song on their 2004 debut Now Here Is Nowhere is awesome, from the colossal, nine-minute stomp of opener “First Wave Intact” to the compact pop charge of “Nowhere Again” to the dry-ice power balladry of “You Are Chains”; “Sad & Lonely” might be the best example of what Secret Machines stood for, namely huge guitars, piercing vocals, and a rhythm section that was 10 times louder than anyone else’s, like a Texan Led Zeppelin that started at Presence. Or, basically, it’s like the last couple of Kings of Leon albums if from the perspective of a space cadet instead of an asshole. If it’s hard to remember the last major-label, classic-rock-indebted record that brought it like Now Here Is Nowhere, it’s largely because it’s tough to think of too many major-label, classic-rock-indebted records from the past 10 years, period.

The follow-up, 2006’s Ten Silver Drops, had its moments — “Alone, Jealous & Stoned,” true to its title, could pass for a lonely stoner’s “Don’t Stop Believin’.” But it sounded like the work of a band chastised and deflated by the fact that they weren’t playing the hockey arenas they were meant to. It was their last on Reprise and their last with Curtis. They released a self-titled album in 2008, and I’m not gonna lie, I didn’t bother. By 2007, Curtis had left Secret Machines to concentrate on electro-gaze act School of Seven Bells, which released three quite good albums, each of which contained one really awesome song. Talk to three different people and they’ll give you a different record as their favorite — I’d go with Disconnect From Desire, their 2010 sophomore bow, which sounds like every random electro-pop song you’ve heard at an upscale gym and secretly liked, and I mean that in the best way possible. They had a clear trajectory from the woozy, Loveless-gone-electro Alpinisms to something more meditative and streamlined on Ghostory, and they seemed like the sort of band that would be people’s 37th-favorite record of any given year.

This might not seem all that impressive, but let’s keep in mind that stratification of the electro-gaze world, where there’s M83 and nearly every other band aspiring to be their opening act. Just because the name is silly doesn’t mean it isn’t absurdly crowded, and I could reel off a list of operational bands such as I Break Horses, Hundred in the Hands, Big Black Delta, Exitmusic, and dozens more that can give you perspective as to how good School of Seven Bells were and how easy it is to overlook that success.

Any 35-year-old dying from cancer is a tragedy — and in the case of Curtis, it’s someone presumably with a lot of music ahead of him. But that apologetic tone reveals a guilt among fans and critics that’s more glaring in the refractory period between 2013’s barrage of year-end lists and 2014, the endless permutations of Vampire Weekend, Kanye West, Beyoncé, My Bloody Valentine, and such that lead you to believe that people are only capable of truly caring about maybe 15 records per year. Curtis spent his entire career in very good, narrative-free bands, and the problem is that very good bands without a narrative are the type to fall through the cracks. Which I suppose is a reminder of how easy it is to forget that most of us probably spend a lot more time quietly and privately liking music rather than publicly loving it.