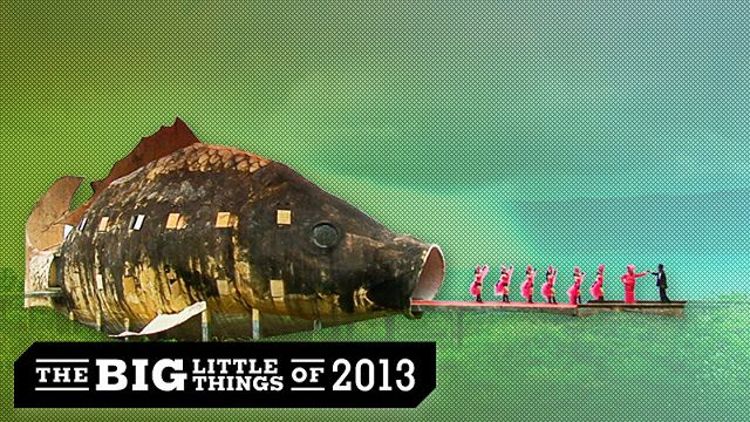 Hannah Arendt’s famous (and infinitely debatable) moral insight tells us evil is banal: Abominations are not the domain of Nietzschean supervillains but ordinary people stripped of their moral compass by rigid ideology and the need to belong. What Arendt didn’t get to is that evil also loves to play dress-up and sing really badly. That’s where Joshua Oppenheimer’s horrifyingly compelling and bizarrely necessary documentary The Act of Killing comes in. Whereas most of us prefer to posture about the nature of genocide from the safe distance of a righteous armchair, Oppenheimer risked his reputation, descended into the bloody depths, and revealed, with the willing collaboration of the overeager killers themselves, that evil is not merely banal — it’s gaudy, grinning, and all too clownishly human. Normally, “must see” is hyperbole suitable only for 15-second TV spots. But when Werner Herzog, a director who legendarily threatened to shoot Klaus Kinski in the heart of the Amazonian rain forest, says, “I’ve never seen anything as powerful, as frightening, and as surreal” — well, “must see” doesn’t even come close.

That is, if you can stomach it. The Act of Killing isn’t the kind of film you catch before a double date in search of diverting dinner-table conversation. It’s more like a nightmarish fugue state, a painful but mandatory investigation whose mystery you’re not sure you want to know the answer to. I struggle to find proper capsule descriptions: Fellini meets The Sorrow and the Pity? Doctor Who by way of Apocalypse Now? David Lynch remakes Priscilla, Queen of the Desert? How do you describe in a handful of syllables the experience of being dragged cheerfully into the heart of darkness by a cross-dressing gangster and a mass-murdering grandfather with the disarming smile of Mr. Rogers? Even giving specific details won’t prepare you.

I could tell you that Oppenheimer’s doc concerns the collective delusion fostered by Indonesia’s military government to justify the 1965 slaughter of nearly a million of its own people, labeled “communists.” Or that he profiles Anwar Congo and Herman Koto, two proud thugs who saunter around the neighborhood in old age, comfortable with their fun-house-mirror self-image as heroes. See, that makes it sound like any other eye-opening, guilt-tripping doc that plays on our quintessentially American ignorance of assorted world horrors. No, Oppenheimer’s film is something far more universal, bizarre, and harrowing: It’s an inquiry into the very ontology of murderous impunity. And by ontology, I really mean “bat-shit insanity.”

But again, “bat-shit insanity” implies something that can be viewed, critiqued, and assessed from a safe distance. Watching Oppenheimer’s film essentially means being strapped onto a scenic boat tour down the river of madness with Kurtz himself. You see, not only did Oppenheimer win the enthusiastic trust of men personally responsible for thousands of killings, not only did he get them to speak openly and honestly about the means, the nature, and the subjective experience of their crimes. He then also helped them to stage nightmarish, genre-inspired reenactments — truly indescribable home movies that draw on everything from film noir to westerns to bad karaoke videos — because they wanted so desperately for him to understand what exactly it feels like to kill another human being. At one point, Herman dons a flamboyant pink dress and dances by a giant fish with a chorus of Indonesian models. And because Anwar and Herman, both huge Andy Williams, John Wayne, and Marlon Brando fans, found their inspiration in the classic American pop culture we’ve so successfully exported around the globe, you personally cannot hide from their grotesqueries. Oppenheimer devastatingly employs the quotidian experience of connecting with a stranger over a favorite song or movie to bond us to his subjects. It’s kind of like going over to your crazy hoarder cousin’s dilapidated house and finding stored in his extensive collection of used KFC containers all the toys that defined both your childhoods. So, yeah, there is no safe distance.

But that isn’t even the most remarkable aspect of this endlessly remarkable film. When Oppenheimer shows these nightmarish shorts to his cheerfully callous DIY filmmakers — when Anwar watches his own carefully crafted work with him cast as the victim — suddenly, almost too miraculously, a tiny window of awareness seems to slip open in him. (As a bonus, The Act of Killing also gives you a little snack food for thought: Is the act of storytelling just an empty gesture we use to pass the time around the ol’ campfire of existence? Or can it actually awaken something in the listener and/or storyteller? Does being moved by something possibly move something within you?) Not that this is a feel-good moment: Anwar’s crimes are neither redeemed nor forgiven; he does not suddenly leap onto the path of righteousness. It’s simply that in that split second in which a flicker of lucidity lights up in his eyes, you see how a single grain of thought applied to a lifetime of thoughtlessness can start to shrivel up the mindless idealism that makes brutality possible in us all; you can also see that one’s humanity is not so easily nor ever fully extirpated, even with decades of indemnity. “Evildoers” are not abstract paper tigers you can dismiss. They are fellow citizens, neighbors who force us to grapple with the palpable, immediate truth that atrocities aren’t committed by monsters — they are committed by human beings. That’s when you really appreciate what Hannah Arendt was trying to say.

And that’s why, minute by minute, The Act of the Killing is the most compelling, disturbing, and remarkable thing I’ve seen in quite a few years — decades, really. It’s not just that it’s a good, or even excellent film. (And it has stirred plenty of controversy in its own right.) It is one of the rare works you suspect might have changed you and redrawn the map of your moral universe.

Oh, and you’ll never be able to listen to “Born Free” without shuddering, ever again.