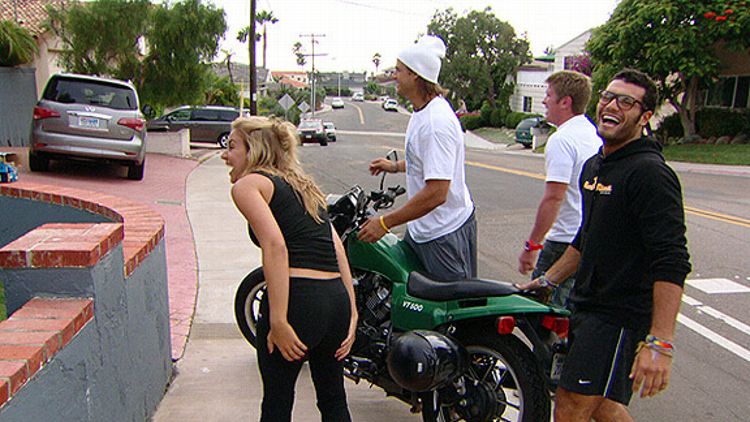 I hear this all the time: “I don’t watch those shows, so I don’t read the Reality TV column.” Of course you don’t watch those shows, that’s the point. You shouldn’t watch those shows — that would cut into your philanthropy/Paris Review-reading/hot yoga schedule. You shouldn’t know that we are in the midst of a Survivor sex scandal, you shouldn’t know that there is an attractive young woman on the Real World dating a dude that makes Screech look like Warren Beatty, and you certainly shouldn’t be following the Basketball Wife coup d’état like it is the Egyptian revolution. That would be weird. That is why this column exists, so you can read it and have something to talk about with your super-hot, super-dumb date, your sister-in-law that the family hasn’t truly embraced, or the person next to you in the Twilight line. Consider the following your “Guide to Thanksgiving Conversations With Dumb People.” You’re welcome.

Weird week. Let’s get to the top scorers.

Nate, Frank, and Zach (Real World, various GRTFL teams): 35 points. I can’t lie. When we made the rule that awarded 35 points for “Being the cause of a visit from any vehicle with sirens,” we were proud of ourselves. But we had no idea we were about to be burdened with the worst cast in the 26-season history of The Real World. In previous seasons there have been assaults, public intoxications, and even one dude whose tongue was bit off. This season? The cops come because Nate, Frank, and Zach moved Priscilla’s boyfriend’s scooter around the corner while he wasn’t looking. What’s next, guys? Prank calls? Seven seconds in heaven? Tying shoelaces together? Messing with someone’s toothbrush? Oh wait, bad example.

I will say, though, that the dude that let them hide the scooter on his property was pretty bitchin.’ He was down with the joke and didn’t waver a second when the cops came. He also lied to the face of Priscilla’s boyfriend when he was questioned about the bike’s whereabouts. If I were producing this season of the show, I would have immediately called my boss and said, “Bad news, Mr. Murray, I just canceled Real World: San Diego. Why? They’re all squares. The hottest two of ‘em won’t even hook up, and the psychopath isn’t drinking anymore. What? Oh, the good news? The good news is that I grabbed the crew and we are now shooting a reality show about some random dude in San Diego. Trust me, he has the X factor. The show is Larry the Cable Guy meets The Honeymooners meets Hamlet. It’s gonna be huge. Sorry, I have to go now — I think he’s about to kill something and eat it.”

Sidebar: If you ever want to be a television producer, trust me, it’s super-easy. All you have to do is name drop the names of a bunch of already successful shows in your pitch. “So yeah, think of it as American Idol meets Seinfeld meets WWE Wrestling meets The Daily Show with a dash of Steve Miller Band hosted by Chris Rock.” I wish I were kidding.

“Crazy” Jackie Christie (Basketball Wives LA, Connor): 35 points. No matter how evil, how manipulative, and how crazy she is, it’s hard not to feel for someone that has been completely alienated from her circle of friends. After last week’s successful coup in which Jackie was ousted as lead Basketball Wife, this week she was in damage-control mode. After calling, texting, and cleavage-dialing every other Basketball Wife in an attempt to get back in the circle didn’t work, she brought Kimsha Artest back into the fold. See, Kimsha was in this season’s first couple episodes and then just kind of disappeared. My guess is that she saw her costars attempt to murder each other on the second day of filming and said to herself, “These broads are even crazier than my husband. Forget this.” When Kimsha was summoned to Jackie’s fashion shoot (20 points), she had to listen to Jackie cry (5 points) and go on and on and on and on and on and on about her arguments with the other wives (10 points). Then they cut to an interview in which Kimsha delivered a soundbite that encapsulated the entire Basketball Wives LA season so well it was like she had had her very own Cyrano de Bergerac just off-camera feeding her lines. But this Cyrano de Bergerac is from Queens.

Ladies and gentlemen, without further ado, I present to you Ron Artest’s Metta World Peace’s “partner,” Kimsha, summarizing the entire season in a statement that is impossible to apply punctuation to:

I think we just found the replacement for Oprah.

Priscilla (Real World, Simmons): 30 points. Having a high school sweetheart and leaving for college is a Catch-22. In Priscilla’s boyfriend Dylan’s case, it is a Catch-DD (what? Too easy? Yeah, you’re probably right). If you don’t watch the show, Priscilla is a gorgeous, 19-year-old, surgically enhanced young woman who dates a fella that looks like Anthony Michael Hall in Sixteen Candles (shout out to the half dozen people who tweeted me that line. Did you really think I wouldn’t plagiarize it?). If you’re Dylan and you’re heading off to college, you have a huge decision to make. You can stay with Priscilla knowing that you will never again speak to a woman this beautiful unless she is asking you to go to the champagne room. Or you can break up with her and try your luck with the ladies of your freshman class who have all completely reinvented themselves and are ready to try anything in the name of “experimentation.” Dylan chose the latter. Dylan then learned that their idea of “experimentation” had more to do with smoking pot, getting tattoos, and kissing girls than it did with sleeping with guys they cheat off of in econ class. So what does Dylan do when he comes home for the summer and finds out that his high school girlfriend is on Real World? He gets back with her.

It takes about two days and one coitus for Priscilla to get hip to his moves and drop this on him while he is attempting a second coitus: “Let’s just go do something. I, like, sooooooooo don’t want to lay here anymore.” Shortly after that they shared a breakup kiss (5 points) that made my wife say, “Ugh, that is DISGUSTING!” Dylan walked out the door, Priscilla cried (5 points) and then sang some terrible off-the-top-of-her-head heartbreak pop jam about him (20 points) with her roommate Alex’s “band,” Alex and the Hats. More on them later.

Dylan, I have some advice. Want to know why I haze you in this column? Want to know why you didn’t get any girls in college? Because you aren’t a nerd, you are a nerd on a motor scooter wearing a leather jacket and sunglasses trying to look like Peter Fonda in Easy Rider. That is never going to work. Be the nerd that you are. Own it. Girls love nerds the same way that they love it when their tough-guy boyfriend tries to ice skate and falls on his ass. Start a Latin club at college, protest the use of starch in the university cafeteria, join the ultimate Frisbee team. The ruler of the nerds will be escorting sneaky eights out of the library while frat boys are dragging fives out of the townie bar. Fact. The motor scooter and leather jacket are cool and all, but you’re running a short con with those. The King of the Nerds route is the long con and a much better play. Next time I see you, you should be waiting for the bus reading a calculus textbook. Trust me, Dylan.

Alex (Real World, Lane): 25 points. Alex is in a “band” called “Alex and the Hats.” Alex and the Hats consists of Alex and two dudes that wear hats. One plays the guitar and one plays some “instrument” that doubles as a chair and looks like a milk crate. Alex got all anxious because this was her first performance in front of an audience (20 points). She performed and broke down in tears afterward (5 points) because she was so moved by the emotion of performing in front of people. Oh, did I mention that the performance was in the parking lot of a surf shop and I have seen a larger, more captivated group at a Brooklyn dice game? Honestly, it was like crying because you told a joke in an elevator and it was your first stand-up show.

Draya and Malaysia (Basketball Wives LA, Jacoby and Simmons): 5 points. Draya and Malaysia got into a fight with Jackie (5 points). I would explain further, but “I don’t care what she said it was like this one that one that one this one she said she said but she said that she said I’m like I don’t want to listen to what nobody said. Y’all grown women and y’all need to come together I am tired of seeing women going back and forth fightin’.” God, Kimsha is good. She is like a modern-day Socrates.

Laura (Basketball Wives LA, House), 5 points. Laura — who may or may not be dating Gilbert Arenas, who may or may not be the father of her children — cried when she announced she was moving from LA to Orlando so her kids could be closer to their father (5 points). The relationship between a basketball player and his lady is very complicated. Here is an actual transcript of a conversation between Matt Barnes and his soon-to-be ex Gloria as she packed up her belongings to move out of the house:

So, sneaky sexy country singer Whitney is currently dating this guy Keith, who was just voted off the show. That wouldn’t be a big deal, but Whitney secretly wed the lead singer of a band called KingBilly in August 2010. So the whole time she was getting with this Keith guy, the poor lead singer of KingBilly was waiting at home without a clue he was getting cuckolded by a dude who “spends half his day in crap.” Hold on. I just realized that this story isn’t nearly as interesting as I wanted it to be. I’m out on it.

Enjoy Thanksgiving and don’t think that there won’t be a GRTFL update next week just ‘cause you aren’t working. Reality TV never stops.