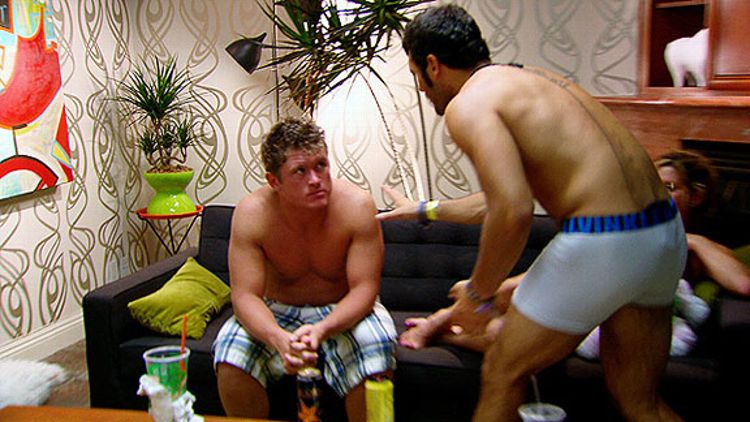 This week, the entire Jersey Shore house turned on the Situation, the entire country of Italy turned on Jersey Shore, and Frank from Real World turned into the best draft pick since Kang took DMX in the Grantland office “Next Celebrity Mugshot Pool.” You let me down, Mischa Barton.

Frank (Real World, Connor), 155 Points: “I need to show people there is a lot more to me than a drunken rampage.” No, Frank. No you do not. There is nothing more to you than drunken rampage. Stay in your lane, Frank — own your rampaging drunkenness. Don’t be the Real World star we see every season who gets inebriated (10 points), sleeps with strangers (25 points), attacks inanimate objects, yells, and pushes their roommates (20 + 5 = 25 points for verbal and physical fighting), blacks out, apologizes, and promises never to get drunk again, only to do it all over that very night. We have seen that guy on the Real World a million times, Frank. Be a new guy. Be the manic-depressive rampaging drunk you really are. You are such a good drunken, manic-depressive rampager.

It all started innocently enough. Frank went to a gay club, brought a guy home, and coitused him all over the house (25 points). He even scored 10 hot-tub bonus points. Frank’s roommates — Zach, the facial-cleansing football captain, and frat boy Nate — were made very uncomfortable by this. Are there really still homophobes? Being homophobic in 2011 is like believing the world is flat or that leeches can cure a cold.

Anyway, when Frank starts to feel the tension from his closed-minded roommates, it gives him all the motivation he needs to make the “no one here understands me” call home to Mom (20 points) and engage in some binge drinking. After 7 or 8 thousand shots at the bar (approximately), Frank stumbled into his room with his patented thousand-mile stare to confront Nate about why he’s been acting differently toward him ever since he used the house as his personal sex palace. His technique for doing so was peculiar — he repeatedly pushed Nate around while screaming, “You’re pathetic!” at the top of his lungs. He then went on to beat the crap out of a room in the house. I swear, Real World producers put vases in the house only because it looks and sounds so dramatic when they get smashed. Frank then did that thing that only troubled reality stars and really talented actors can do, going from raging anger to teary self-hatred in a millisecond (20 male-crying points). It was quite a performance.

Naturally, after threatening to leave the show (15 points), he woke up in a hotel room with no recollection of what happened, and after a roommate intervention (30 points), swore to “curb the drinking.” We have seen this all before, he’ll stop drinking for half an episode, then go right back to smashing all the inanimate objects in the house in an inslopsicated rage. That is where he makes his mistake — he should just skip the half an episode in which he calms his drinking, throw his little bandana headband back on, and resume his nightly quest to either sleep with any human who makes eye contact with him or drink himself to death. I know Connor’s GRTFL team would appreciate it.

Snooki (Jersey Shore, Lane), 40 points. Snooki kicked things off by crying on the phone (5 points) as she admitted to her boyfriend, Jionni, that she coitused Vinny. While trying to convince him to stay with her, she dropped this gem: “I know you don’t like this, but you need to handle this to be with me.” Not a great sell, Snook. Basically, you just said, “I am habitually going to cheat on you. Cool?”

Reeling from her breakup, Snooki grabbed her spherically shaped partner in crime, Deena, and went to a club to dance — at 11 in the morning. Yep, they drank, shook booty, and fell all over the place (10 points) before noon. Imagine you were a mature Italian couple sitting down for a nice brunch, having a chat about what color drapes you were going to buy, and in walked two 4-foot-tall alcoholic American chicks, dressed like prostitutes and screaming at the top of their lungs, followed by two security guards and a film crew. It is a wonder that it has taken this long for Italy to turn on our heroes, but the Italians made up it with their vitriol.

One evening when Snooki and Deena were at the club drinking heavily and doing their “is my vagina out?” dance, they were encircled and harassed by a dozen or so locals. It was a very European passive-aggressive brand of harassment. They were really just mocking and pawing at the meatballs, but would attack and retreat like mosquitoes. Looking for safe haven, the meatballs headed to the place they felt the most comfortable: the bar. While at the bar, the bartender, the provider of their sacred nectar, tossed ice at them for no reason whatsoever. This is especially problematic for Deena and Snooki because bartenders are to Snooki and Deena what flowers are to bees. They are a vital part of their life cycle without whom our little leopard-printed ladies would cease to function. Alcohol is to Snooki and Deena what oil is to the Tin Man.

Realizing that without the support of the bartender they would no longer have access to booze, they went into panic mode. They started screaming (5 points), throwing bottles at him, and were removed by security (20 points). Upon arriving home, they continued to drink until sunrise, when they ventured back outside in search of more alcohol. No one has ever drank this much without holding up a sign in the background of the College GameDay set.

Deena (Jersey Shore, Jacoby), 27.5 points. Deena wore sunglasses at the club (2.5 points) and was with Snooki when the most important person in their lives, the bartender, turned on them (5 + 20 = 25 points). She also attempted to seduce Pauly with the most beautiful verbal expressions of love since Shakespeare’s sonnets. This week’s GRTFL Top 5 list is the top five seduction attempts listed from “that seems aggressive” to “we should probably remove this woman from the population before she cultivates some sort of super-STD that will end civilization”:

1. “Me and you can just do sex. But I want to go harder than you did with that one girl.”

Dawn, Jim, Whitney, Cochran and Elyse (Survivor, Various GRTFL Teams), 15 points. The Survivor immunity challenge in which these folks participated was the vilest thing in the history of television. The teams had their hands tied behind their backs and were forced to bite chunks of a roasted pig off of a spit, then spit/vomit the chunks into a basket. You know when you’re eating a steak sandwich and you bite into a not-fat-but-not-quite-meat-gross-chewy-ligament bite? Sucks, right? Well imagine people who haven’t showered in weeks taking only those bites, then spitting and vomiting them all over the place. Also, pork belly is disgusting. I know all you food snobs think it’s a delicacy, but it’s just unsalted, uncooked fatty bacon. Go ahead, tweet insults at me, food nerds.

Mike (Jersey Shore, Kang), 12.5 points. While Mike was wearing sunglasses out at night (2.5 points), the entire nightclub turned on the Jersey Shore cast, shouting insults at them. Italians have not been this united in their hatred of anything since Mussolini. I don’t care how much money you have, or how many women you sleep with, or how large your entourage is — it can’t feel good to have an entire nightclub turn on you simply because they think you’re an asshole. Sitch handled it in a very Situationy way: He attempted to start a fistfight with the entire crowd (5 points). Then, a different evening, he tried to start another fight (5 points), but this time it wasn’t because the crowd was chanting insults at him, it was because he forgot to wear his sunglasses and was upset because he could actually see the unattractive women rejecting him.

Sam (Real World, Lane) 5 points. Sam snogged a chick at the bar, continuing her streak of seducing more attractive ladies than any of her male roommates. At the reunion, I hope she makes her entrance through a huge piece of paper bearing the number of open-mouth-kissing points she scored, like a modern-day lesbian Joe DiMaggio.

Priscilla (Real World, Bill) 5 points. Priscilla notched 5 points for a verbal argument with Nate. She continues to underperform even after declaring “I am ready to have fun! My boobs are coming out!” and “I am not saying no to a single thing this whole time” at the pre-draft combine.

Coach (Survivor, Jacoby), 5 points. Coach is a pious man. When he was searching for the immunity idol, he got down on one knee and said, “I don’t propose that it is your will that I find the hidden immunity idol, but I beg you to let me find it today.” Then he found it. I like to think this is a coincidence and that God is too busy to answer immunity idol-related prayers from Survivor contestants.

Ozzy (Survivor, Simmons) 5 points. Ozzy used an emoticon on his vote card (5 points) and he and Elyse have the whole “will they or won’t they” thing going on, like Dave and Maddie on Moonlighting. If you are under 30 years old, Moonlighting was this show where Bruce Willis … ah, forget it. That reference wasn’t that funny anyway.

How Good Is Former Virgin Joe Jonas at Singing About Sex?