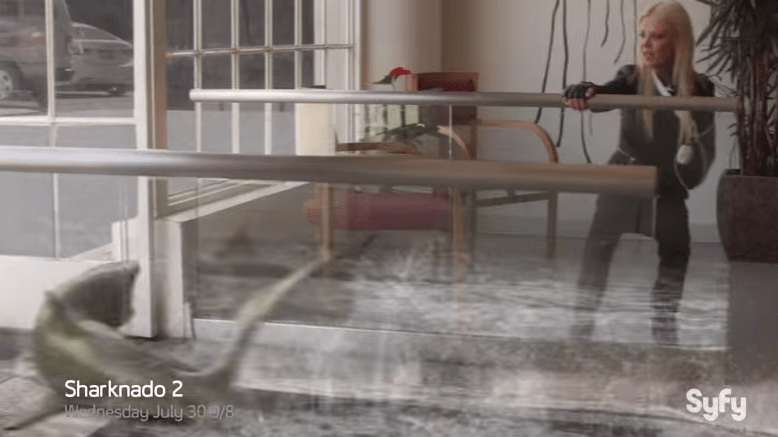 Sharknado 2: The Second One is less than a week away. To excite you to the point of no return, Tara Reid has shared some information with GQ:

Tara’s been spending time with the scientific research out there, and it shows. For example, she’s probably bookmarked the report that AccuWeather made after Sharknado devoured Twitter last summer: “A tornado would not have the ability to sweep up marine life. Traditionally, a tornado is formed over land where a similar formation over water would be known as a waterspout. Understandably, ‘Shark-Spout’ doesn’t have quite the same ring to it.”

Wait, that’s not at all what Tara’s even saying.

“My guess is if [the tornado] gets some baby sharks, they might get thrown,” a National Oceanic and Atmospheric Administration scientist told Mother Jones. “But they wouldn’t do a whole lot of damage — assuming they live … The sharks would not be in very good shape.”

Oh WTF, come on. I know there’s at least one other master of science who’ll put it all on the line and help Tara expose the reality of shark-packed wind-vortexes that can kill you and everyone else.

CNET, maybe? “Yes, technically there has never been a documented tornado that tosses great white sharks into the middle of a major megalopolis” — BOOOOOOOOO! — “but there have been real-life reports of terrifying animal-infested twisters.” Yeah? OK! Turns out the Mother Nature Network has instances of fish, frogs, jellyfish, worms, and goddamned alligators falling from the sky after getting tornado-scooped. The alligators happened in 1887, so maybe that’s a tall tale, but let’s go with it. Mashable also has a nice collection of whalesplosions, golfballicanes, and ratastrophes.

But zero documented incidents include sharks and tornadoes mingling in a deathtastic fusion of teeth and twister. So, this sucks. I want to believe, Tara. In you, in the whole idea that sharks could actually be stuck in tornadoes. Maybe the movie will convince me??

Lightning Round: Insta-Reactions to the First 'Fifty Shades of Grey' Teaser Trailer