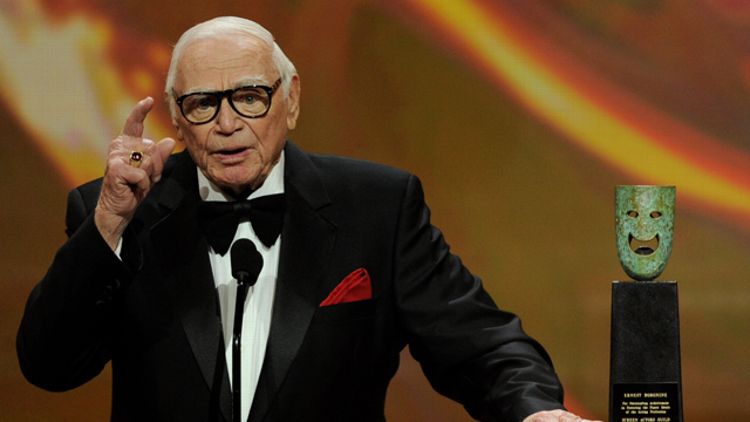 Years ago, stipple-happy Spy magazine brother-cartoonists Drew and Josh Alan Friedman prophesized a mid-21st-century Baltimore in which everyone, mysteriously, looks exactly like Ernest Borgnine. A whole Charm City of Ernests, beetle-browed and gap-toothed and more than vaguely simian, complaining — aww, Christ — about their corns.

This was sort of perfect, as no famous person has ever more closely resembled his or her Friedman caricature than Borgnine, who died of renal failure over the weekend at age 95. And yet in real life, it seems unlikely we’ll see another Borgnine onscreen, or anything close.

He was born in 1917, to Italian-immigrant parents who called him Ermes Effron Borgnino, a name that makes “Ernest Borgnine” sound like a matinee idol’s handle. He joined the Navy during the Depression, then re-enlisted in 1941 after Pearl Harbor; all told, he served 10 years, not counting his four-season stretch as the titular PT-boat commander on McHale’s Navy. When he got out, he entered show business at his mother’s suggestion; he took six months of G.I. Bill–funded acting classes and started getting theater work. By the mid-’50s, he’d lumbered into a succession of supporting roles on the big screen, playing lugs and thugs, turning up to bait the hero with various shades of sneering menace.

Borgnine, as the sadistic Sargeant “Fatso” Judson in From Here to Eternity, regarding Frank Sinatra’s Maggio: “I’m gonna cut this wop’s heart out. Anybody steps in here, I’ll give it to ‘im first.”

Borgnine, as a gunslinger in Johnny Guitar, to Sterling Hayden: “A man who can’t hold on to a glass should drink like a baby, from a bottle. Open your mouth, guitar man, and I’ll feed ya.”

Borgnine, in Bad Day at Black Rock, to Spencer Tracy, into whose soup he’s just emptied a whole bottle of Heinz: “I’m half-horse, half-alligator. You mess with me, I’ll kick a lung out of you. Whaddya think of that?”

These were all good movies; it wasn’t a bad niche. But in ’54, in a meeting on the set of Black Rock, he convinced director Delbert Mann and writer Paddy Chayefsky that he could show a gentler side, and Mann gave him the title role in 1955’s Marty. He played a sweet-hearted Bronx butcher and self-described “real professor of pain” who falls for a plain-Jane schoolteacher. He won Best Actor that year, beating out Sinatra, Tracy, James Cagney, and James Dean; he was also named Man of the Year by America’s butchers, beating out countless gifted meat-cutters.

“So it doesn’t matter if you look like a gorilla,” Marty tells his girl. “See, dogs like us, we ain’t such dogs as we think we are.”

That’s probably too many words for a headstone, but it would do nicely as an epitaph for Borgnine. He’d play more heavies post-Marty, an unavoidable career track for an actor rumored to have been the model for the shooting-range target known as Advanced Silhouette SP-83A, or “The Thug.” But he’d also find roles that made use of the warmth, sensitivity, and good humor his galootish appearance belied.

Curb Your Enthusiasm star and Marty enthusiast Jeff Garlin quoted the we-ain’t-such-dogs line Sunday night on Twitter; you got the feeling, watching the social-media tributes pile up, that as much as Borgnine meant to everybody as a 50-year screen omnipresence, he may have meant the most to large, soulful, funny-looking men. (“Got to meet Ernest at the hotel bar in Milwaukee … What a mass he was. A boulder,” wrote the Pixies’ Black Francis, no small pebble himself.)

His 2008 autobiography was called Ernie; he’d initially wanted to name it after a slogan he’d spotted on the side of a nut-vendor’s cart in New York City, until his publishers balked at printing a book titled I Don’t Want to Set the World on Fire, I Just Want to Keep My Nuts Warm. Over the years, Borgnine did his share of nut-warming work, as character actors always do, from 1975’s The Devil’s Rain (a simultaneous career nadir for both John Travolta and William Shatner, with Borgnine as a Satanic priest who turns into a man-goat Beelzebub) to 1996’s All Dogs Go to Heaven 2 (in which he took over the role of pit bull Carface Carruthers, voiced in the original by Vic Tayback).

In 1999, Mike Nelson and his Mystery Science Theater 3000 robots roasted the über-cheap Merlin’s Shop of Mystical Wonders, with Borgnine as a kindly old man telling his grandson scary stories; when Borgnine’s credit comes up, one of the robots cracks, “The mystical wonder is that he’s in a movie.” They should have known better: Borgnine was a lot of things, but he was seldom unemployed. He was always around, ready to punch in, whenever a script called for somebody to play a guy named Sal or Bert or Lou or Mac or Barney or Dutch or Shack or Steamtrain.

But he also played the Roman Centurion in the 1977 TV miniseries Jesus of Nazareth, Vince Lombardi, Angelo Dundee, J. Edgar Hoover, and Dominic Santini, the Korean War vet who helped Jan-Michael Vincent keep Airwolf in the air. He made six films with the great director Robert Aldrich, including The Dirty Dozen and the amazing Emperor of the North, where he’s a sadistic train conductor with a thirst for hobo blood. He died heroically in Escape From New York, in a hail of Malpache’s bullets in The Wild Bunch, sweatily in The Black Hole. He was killed by Bruce Davison’s trained rat-army in Willard, but managed to make it topside in The Poseidon Adventure.

Ernest Borgnine! It was just a fun name to say, instantly evocative of abject hairy-backedness, a kind of gross male unbeauty, and pop culture had fun saying it.

Ellen Burstyn in 1978’s Same Time Next Year, describing her husband to Alan Alda: “He runs four miles a day and has a body like Mark Spitz. Unfortunately he still has a face like Ernest Borgnine.” George Carlin, onstage in the ’80s, talking about how people always assume the things they’ve lost have been stolen, no matter how worthless: “Hey — who stole my used bandages? And they also got away with my nude pictures of Ernest Borgnine!”

No one wanted to see Ernest Borgnine naked, and yet there were urban myths about how he got down in the bedroom. He was married five times — once, for 38 contentious days, to Ethel Merman, whom he was rumored to have Dutch-ovened on their wedding night. In Merman’s autobiography, the chapter “My Marriage to Ernest Borgnine” consists of a single blank page. Borgnine seems to have agreed. He said the marriage became “Hell on Earth” by the end of the honeymoon, and once cracked that wedding Merman was “the worst mistake of my life. I thought I was marrying Rosemary Clooney.”

He could be coarse. He made rude remarks about feminists (“You can’t expect anyone to take you seriously if you burn your undies and tell me I’m a pig. That’s why it failed. Too many ugly broads telling me that they don’t want to sleep with me. Who wanted you anyway?”) and Brokeback Mountain (“If John Wayne were alive, he’d be rolling over in his grave”). Sometimes he’d say that working kept him young; once, in 2008, in a whispered aside to Fox & Friends host Steve Doocy that got picked up by a microphone and went out over Rupert Murdoch’s air, he answered a question about the secret of his longevity by saying “I masturbate a lot.” Either way: He stayed busy.

But pop culture still loved him, like you love a drunk uncle. Hence the as-himself cameos on The Simpsons (as a celebrity-guest scout-troop leader whose charges are killed by Jason Voorhees) and Saturday Night Live (as a guest on DeAndre Cole’s “What Up With That?”), the existence of a punk band called Fatso Jetson, and the ironic-reverent Borgnine shrine at the Tex-Mex restaurant Tortilla Flats in New York’s West Village.