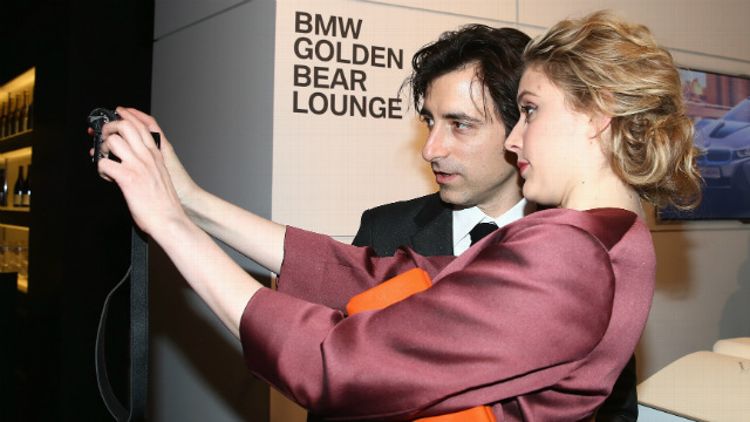 Frances Ha — Noah Baumbach’s latest flick, a black-and-white comedy about a young dancer flailing around New York City — isn’t exactly all smiles. Like much of Baumbach’s back catalogue, you get plenty of people being petty, confused, unkind, blunt, and full of shit. But unlike The Squid and the Whale, Margot at the Wedding, or Greenberg — all of which try to make you, and to an amazing degree succeed, root for deeply, deeply unlikable people — Frances Ha throws you a bone right off the bat, in the form of Greta Gerwig. As Frances, Gerwig bounces from rough patch to bad idea to well-intentioned screw-up, indefatigably cheery and eager the whole time. Especially relative to Baumbach’s last hero, the perfect malcontent Roger Greenberg, it’s like she’s a big straw basket full of puppies.

Gerwig, who met Baumbach on Greenberg, co-wrote the movie. Since, the two of them have moved on to another co-written project, again starring Gerwig, as well as an animated movie for Dreamworks, about a plucky dog searching the city for his lost love. (They’re also dating. For much more on that, I suggest this excellent New Yorker profile.) Last week, I sat down with Baumbach briefly to talk about collaborating with Gerwig on Frances Ha, as well as the Internet, The Corrections, and Kanye West. Remembering that great scene from The Squid and the Whale, when Jeff Daniels says he fired his agent because he “made a disparaging remark about the Knicks at a party” (“Said they played like thugs”), I also asked about the NBA playoffs. (This was right after the Knicks had tied their series with the Pacers at a game each.) Only appropriately, the exchange ended up being less about Baumbach’s sports fandom and more about his relationship with his father.

Have you been watching the Knicks’ playoff run?

Oh, yeah, of course, definitely. I’m glad they won the last game. I think they should at least just lose to the Heat. I’d like to get that far.

What do you think of J.R.? He’s a pretty divisive guy.

Click here for all of our interviews with fascinating people from the worlds of sports and pop culture.
I mean, I love watching J.R. Smith. I was annoyed at him when he hit Terry. It just seemed like — I think they could have swept [Boston] if that hadn’t happened. And I’m a Red Sox fan, so I was sort of in a weird [place], ’cause the Celtics were using the Red Sox comeback against the Yankees as fuel. And I was like, “Yeah, actually, I love that.” But not this time.

How’d you end up a Red Sox fan?

Oh, I think, as a kid, I was trying to stake out my own [space]. My dad was a Met fan. He’d been a Brooklyn Dodgers fan and became a Met fan. So, um, I think I just wanted my own team in a way. I had already disliked the Yankees ’cause my dad hated the Yankees. I think the Red Sox were kind of companions to the Mets at the time. It had nothing to do with Boston, really. And then as I got older … it’s hard to change teams as an adult.

Who was your favorite Knick growing up?

I actually became a really big Knick fan a little later. I think I actually resisted it a little, ’cause my dad was such a big Knick fan. So I was more a baseball fan growing up. I really became more a Knick fan when I got out of college, basically the Riley–Van Gundy years. But I was aware of Bernard King and stuff when I was a kid.

OK, so moving on to the movie — how did you and Greta write the screenplay together?

A lot of it we weren’t in the same place. We talked on the phone a bit, but we would really e-mail ideas back and forth. Initially it was just a document that had thoughts, really disparate ideas. And in the process, first of adding and then subtracting from that document, we realized what feels like this movie. Because of course at that point we don’t know what this movie was. We had ideas for romantic relationships that started to move out of the document because it seemed like this was more gonna be about [Frances] and her friend.

When you actually sat down to write, did it come out easily?

It was less a thing of “let’s bang out a script” and more “I took a crack at that scene, what do you think of this, why don’t you work on this … ” We found, as we wrote, that there seemed to be a real unity to what we were writing. It felt like one voice. We kind of both intuitively seemed to understand the character and how she spoke, in a way that I wouldn’t have necessarily guessed.

So you feel your way through scenes, until things start to reveal themselves to you, and then bigger breakthroughs happen. With this movie, the breakthroughs really were figuring out the structure: that it would be in these addresses [of the different places Frances lives], and these chapters. And then, subsequently, it was the Sophie [best friend] relationship as the through line to the movie. Until we passed those hurdles, it could have gone in a lot of different directions.

Did you guys have a favorite procrastination pastime? Any particular part of the Internet you liked to frequent?

When you find yourself on the Internet when you’re supposed to be writing, you’ve already lost. It’s even beyond procrastination when you end up on the Internet. It’s like saying, “I’ll dabble in crack.” It’s a sinkhole. I try to procrastinate, if I can, productively, like I’ll work on something else as procrastination. Or I take a walk. Because often I find, if you get out, more things come to you. I still get caught in this fallacy that if I’m sitting at a computer, somehow, I’ll grind it out. When in reality I find, if you let go a little bit and clear your head, suddenly you have 10 ideas …

You also collaborated with Jonathan Franzen when adapting The Corrections for HBO. Since it was his material, did he take the lead?

We only shot one episode, but we wrote maybe five and we tended to sort of break it up, per episode, roughly in half. It was a pretty even split, and it was fairly reinvented in what we planned for the show.

It didn’t get picked up, unfortunately, although in The New Yorker’s profile you sounded pretty OK with that. Would you consider working in TV again?

Um. I learned a lot doing The Corrections. I feel I kind of [long pause] I don’t know. I think what seems to be kind of new form, or a more accepted form of doing one season, or a miniseries — kind of a long movie — that’s interesting to me. I’m really not that interested in episodic TV at this point.

Can you ever tell, when people approach you, which movie of yours they’re a fan of?

It’s more like, often the compliment matches the movie [laughs]. Different movies have a different style of compliment. Like with Margot, there’s always a strong emphasis on the subject — it’s always “I liked it.”

You’re obviously particular about who you collaborate with. But if someone crazy called — like, say, Kanye — would you …

Give it a thought? I mean, if it felt like something that I could do well. Yeah, I’d be interested in what Kanye would want to do. Yeah, yeah. Let him know.