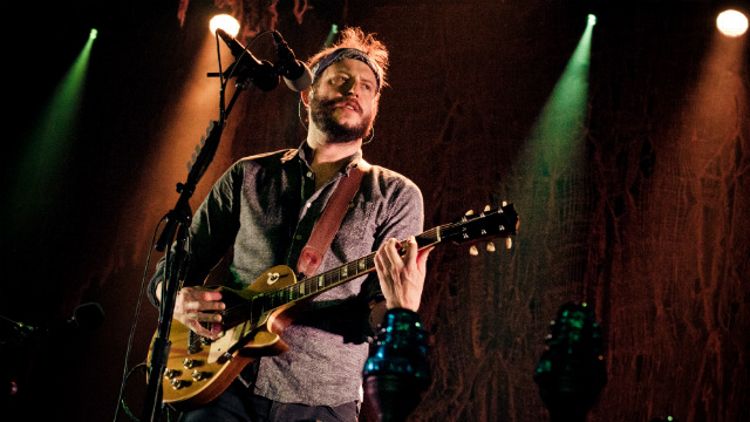 When he first showed up, Justin Vernon was Bon Iver, and Bon Iver was Justin Vernon. At this point, though — between work with Kanye West, Gayngs, and even the Eau Claire Memorial Jazz I Ensemble — it’s easier to understand that Bon Iver is just one of the ever-restless Vernon’s manifold musical iterations. That’s a list highlighted by Volcano Choir, a collaboration between Vernon and his post-rock idols, Collections of Colonies of Bees. Ahead of this week’s release of Repave, the second Volcano Choir album, Grantland caught up with Justin.

You’ve gotten more and more known for your collaborative work. Were you always good at sharing? Like as a kid and stuff, in kindergarten?

[Laughs.] I think so, yeah. I was told that was a good idea.

What was the big difference between the two Volcano Choir albums?

[On the first album] I’d just got my studio going, in Fall Creek. Well, it wasn’t really going. It was a laundry room with a computer in it. And [the Volcano Choir sessions] were the first sessions that went on there. It wasn’t the first time we were in the same room or anything, we’d known each other for years. But we said, “We should probably get together and flesh out the ideas.” So we did that a few times. Jagjaguwar had already agreed to put out the album, but, up until the last session, we were gonna call it a split. And then we kind of realized — “Dudes, this is not that. This is a band. This is us doing a new thing.”

Your lyrics seem more direct this time. Was that a conscious decision?

Click here for all of our interviews with fascinating people from the worlds of sports and pop culture.
I almost never come from a conscious place of, “I’m gonna sit down and write lyrics.” It’s really about reacting. It’s the part of my brain that isn’t distracted by ego, and what is cool or not. I happen to be lucky that what comes out of my brain is cool. Maybe that’s because I self-edit, and I can trust myself, because I’ve been doing it for so long. But it’s also about reacting to a good song. I didn’t write the songs. Chris [Rosenau] and Tom [Wincek] principally did all the music. Then me and the drummer, Jon [Mueller], added our stuff. Which is kind of an awesome process.

You’ve described yourself as a huge, huge fan of Collections of Colonies of Bees. So when you finally met these guys, was it as surreal as being in the room with Kanye?

It’s the same thing, man. Kanye’s got such a brightness to him. He’s such a genius. He loves music as much as I do. It’s the same with almost everyone I work with. Chris Rosenau is a genius too. Tom Wincek and Jon Mueller … they’re all people that have really given a shit about music, so much, and for so much of their lives. It rings true.

You’ve got a few other Wisconsin bands that you’re either producing, working with, or releasing on your label, Chigliak Records. It almost feels similar to a rapper, breaking through and then putting on his dudes. Is that fair to say?

I mean, I’ve listened to rap my whole life. I care a lot about it. I also grew up playing sports, and it’s easy to connect with that sort of camaraderie, and wanting to represent yourself by representing the people around you. The squad.

Do you feel like your decision to stay in Wisconsin — and not move to, say, Los Angeles — is picked apart? Like, the answer has to be more complicated than “Well, I like living here.”

I don’t know. I just live in Wisconsin because that’s where I’m from. It’s cheap. It’s awesome. It’s gorgeous. You don’t have to deal with idiots very often. People are usually like, “Oh you play in a band? That’s cool. Good job!” In L.A., it’s like, “You play in a band? What band? I play in a band.” Fuck that.

You’ve said that, after working with Kanye the last time, you knew you’d get the call again. So when it does happen, how quick is it?

It is a little bit too rushed for my style. I did hop on a plane and got to Paris. I wish I could have spent more time there this time. But it worked out fine.

What’d you guys do for fun in Paris? Did you play any basketball? Go to the Louvre?

We didn’t have time, not while I was there. We were working 18 hours a day.

You’re an old hand at this point. With the new producers Kanye brought in, though, could you still see them still kind of in awe of him?

I think if you spend any time being in awe, you’re not doing your job right.

Can you talk about “Hold My Liquor,” specifically? Where did that come from? Did Kanye already have the melody?

Nah. Nah. That was just me and [longtime Kanye engineer] Mike Dean in the studio. He was playing keyboard and I was testing the microphone. Somebody pressed record. And that’s what you got. That melody, that became Chief Keef’s melody. I think it might have just been some words I had played around. [Sings] “The South side of Chicago …”

We’ve heard you do a lot of kind of vocals on Kanye stuff. But will we ever hear an actual rap verse out of you?

You’re never gonna hear it. There’s stuff in there. It’s me screwing around, trying to get ideas to show people. But you’ll never hear it.

So Kanye followed up the maximalism of MBDTF with the minimalism of Yeezus. Any idea where he goes next?

Well, it wouldn’t be Kanye if he wasn’t the only one that knew …

Between Bon Iver, Kanye, and your Grammys moment, there’s already a lot to choose from for the first line of your obituary. You ever think about what it might be?

Oh, man. If I spent any time thinking about that, I’d be a total asshole. Not enough time for that shit.

OK, how about your Grammys speech — have you watched that recently? I just did, and was surprised by all those heavyweights you beat out …

I didn’t beat anybody out. That thing is so dumb. The problem with it, man, is that, people are trying to win at music. You can’t do that. You can’t win shit at music. There’s just too many people not represented. There’s too many artistic limbs of the tree of our culture in that shit. But everybody there pretends they’re at the top of the tree. It’s very confusing. [Pause.] Watch Volcano Choir win Best Album of the Year.

Do you find yourself getting angry about bad popular music? Or do you feel that it’s a waste of time?

When you go buy a pair of shoes, you got a choice. You can buy a cool-looking pair of shoes made in a sweatshop. Or you can buy a pair of Red Wings that’ll last 25 years and look dope. I’m not mad at Nike, I’m not mad at pop music. Everyone’s circling around that dollar, and that’s usually when the spirit dies. It’s been talked about for centuries, people talking about the money first. I’d rather keep my spirit intact.