Q&A: Dancing With the Stars’ Hope Solo Sizes Up Her Competition 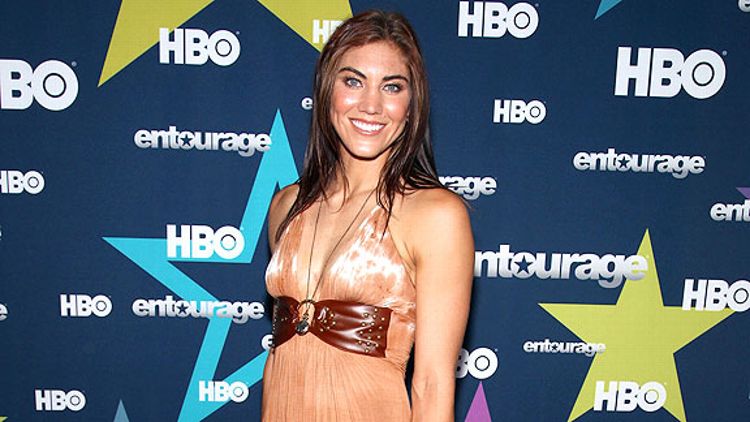 This summer we all fell in love with the U.S. women’s national soccer team as we cheered them on through their nail-biting run to the Women’s World Cup final. And perhaps no player from that team captured the country’s imagination like goalkeeper Hope Solo, who next week will tango her way back onto our TV screens as a competitor on the 13th season of ABC’s Dancing With the Stars. We’re pleased to announce that Grantland will be checking in with Hope every week about her stint on the show. Today we spoke with her about why she agreed to do DWTS, her fondest memories from the World Cup, and her fellow dancers Chaz Bono, Ron Artest, and (front-runner?) David Arquette.

What was your reaction when you were first offered the opportunity to be on the show?
I couldn’t believe it for several weeks. I thought it was just talk. After the Women’s World Cup, I was doing a lot of press here. It was a hard time but also a great time for me. We were minutes away from winning something you’ve prepared your entire life for and then ended up not coming up on top. So I was just focused on that experience and bringing it back to America. I was really just giving back to the fans who had given us so much. So I heard the talk, but I really wasn’t thinking about it.

Click here for all of our interviews with fascinating people from the worlds of sports and pop culture.
My agent brought me the offer, and I was still like, “That’s an awesome offer, but there’s no way I can do it with my training schedule — coming off a World Cup and going into the Olympics.” But then, with my training schedule, there was a month off. Plus I was taking time off for my shoulder to heal [from a World Cup injury], so it almost made no sense to say no. And that’s when I got scared.

Because you lost your out.
Right. I got real nervous. Real quick.

Were you at all hesitant to get into something competitive again, right after the World Cup?
I live for competition. It makes my life complete. My life goes in four-year cycles. The World Cup is every four years and the Olympics are every four years. That’s how we base our personal lives — that’s how some players decide when they have families. The off years? They’re not that fun, to be honest! You crave intensity. And [Dancing With the Stars] is intense! It’s grueling, it’s hard. I know at the end of it I’m going to be proud of what I accomplished, but right now it’s not easy. My dance partner Maks [Chmerkovskiy] keeps telling me to try and enjoy it. But I didn’t need a break from competition. I just needed a break from diving on my shoulder.

Before this, were you much of a dancer?
I know I can’t dance. I am the worst dancer. I have no rhythm. I just do step-and-snap. I love it in the privacy of my own home and every once in a while at a club. But singing and dancing are my two greatest fears. And flying. Unfortunately, I now have to do two of the three.

How long have you been practicing for?
We’ve had seven sessions.

How does the training compare to the training you do for soccer?
It’s hard. Maks is very direct with me. There are a lot of things you have to figure out that people don’t realize. Having your hips go one way, your head up, your neck straight, your arm positioned in a certain way; there are so many technical things. It’s like soccer: putting together five to 10 different things in one play. So it definitely reminds me of my training. I really do appreciate Maks, for bringing that. I don’t want a soft dance teacher.

As a goalkeeper, you’re in charge of marshaling your defense and making sure everyone is where they need to be. Is it difficult to be the one getting instructions now?
No. I mean, I can’t dance. Maks is a professional. I have no problem getting instructions. And I assure you, he gives them.

Talk to me a bit about your fellow competitors.
Well, Ricki Lake is such a sweetheart. She seems so graceful on the dance floor. I think she’s gonna do really well. She has some experience, so she’s ahead of the game.

Chaz Bono, I had no idea what to expect. But he can kind of bust a move. And he works as hard as anybody. Very, very nice guy. Ron Artest is just a goofball. He’s always filming on his video camera, and he shows up late.

Do you all him Ron? Or have your tried Metta World Peace?
I have not called him World Peace yet.

Have you gotten starstruck at all?
I don’t really get starstruck. I don’t know how to explain it. L.A. is a bit strange. It doesn’t seem like the real world. I went to the Entourage premiere and did a bunch of interviews on the red carpet. Usually, for me, interviews are very factual. Like, “What happened on this play.” But now it’s like, “What kind of face wash do you use?” and “What do you wear to bed at night?” and “If you could hook up with anyone in Hollywood, who would it be?” I have a real problem being fake about that stuff. I don’t know that the entertainment world loves me.

Hold on — let me cross out my face-wash questions.
Oh no!

Who do you think is the front-runner this season?
I think David Arquette, because he’s such a free-spirited guy. You can see that he’s not going to hold back. And you can tell he really wants this.

Looking back with some perspective on the World Cup, can you pinpoint one moment you’re going to remember, in particular?
During the Brazil match, before Abby [Wambach] scored, I always believed we would come back. I got that feeling, everyone had that feeling. But as the clock started to wind down I was starting to think, “Well, shit, what if this doesn’t happen?” But when Abby scored, I knew we would win on penalty kicks. I remember going into the penalty-kick situation, standing over by the crowd, away from everyone else. It was right by our friends-and-family section. I felt like I was in that moment. I just fed off our fans right there. It was, hands down, the best experience.

Hero Author Sues to Block Release of In Time