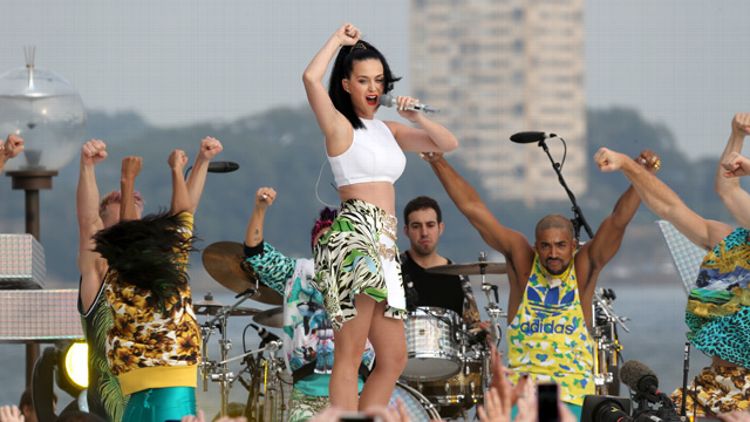 When you deploy a shimmering golden 18-wheeler to announce your new record, you’re gonna debut at no. 1. There is no other way. And so it was that Katy Perry sold 286,000 copies of Prism to claim the top spot on the Billboard 200 this week, also securing bragging rights for 2013’s best debut week for a female artist. Perry passed Miley Cyrus’s Bangerz by a tight 17,000 units and blasted by her first no. 1 album, Teenage Dream, which sold 192,000 copies in August 2010.

Perry is only the fifth woman to hold the no. 1 spot so far this year, joining Selena Gomez, Ariana Grande, Miley, and Taylor Swift’s two holdover weeks for 2012’s Red. Eighteen of the year’s chart-winners have been men, one was the Les Misérables soundtrack, and 12 were groups, only three of which — Paramore, the Civil Wars, and Lady Antebellum — feature women. And while it’s great that Perry’s “Roar”-led record sold the most for any female artist, it debuted miles below Drake (658,000 copies of Nothing Was the Same), Jay Z (527,000 copies of Magna Carta), and Justin Timberlake’s first 20/20 Experience album, which came just shy of selling 1 million in its first week. Prism did come close to competing with Kanye’s Yeezus (327,000 copies), Daft Punk’s Random Access Memories (339,000 copies), and Timberlake’s second dip from the 20/20 Experience well (350,000 copies).

The week held sorry news for music sales in general. “While Perry’s Prism brightens the top of the chart, the rest of the albums on the tally sell far fewer copies,” Billboard writes. “In fact, Prism outsells the Nos. 2-9 albums combined. In turn, overall album sales fell to a historic low this past week: 4.49 million albums were sold, falling below the SoundScan-era (1991-present) low that was set in the week ending Sept. 15 (4.54 million).” And you know why that is? Because Lady Gaga and Eminem are returning in the next couple weeks, and everyone’s waiting to bust their piggybanks to buy those records, whether you like it or not.