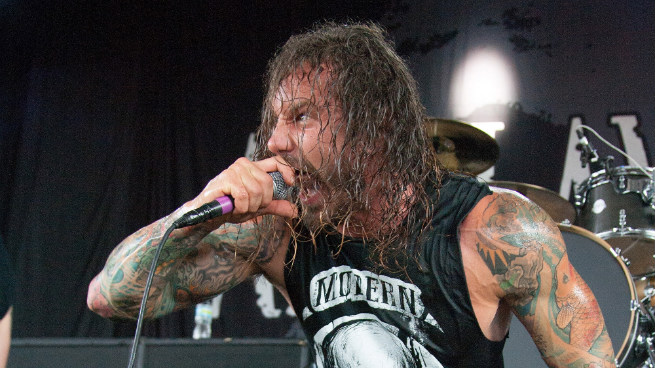 Tim Lambesis, currently incarcerated lead singer of Christian death metal band As I Lay Dying, has admitted that the band had faked being Christian. Lambesis was sentenced to six years starting in May for attempting to a pay a hit man a thousand bucks to take out his then-estranged wife Meggan Lambesis, only to learn that the hit man was an undercover cop. Meggan Lambesis said they had an amicable separation and that she was surprised to learn her ex-husband wanted her dead. Tim’s legal team blamed his steroid use, related to a sudden obsession with bodybuilding, for the blurred mental processes that made him decide to have Meggan killed. Tim eventually changed his plea from “not guilty” to “guilty” and received the six-year sentence.

At home on house arrest in May, he wrote a long blog post about how he had been reevaluating his faith and “felt it was unreasonable to call myself a Christian in light of the evidence.” Then he admitted he hadn’t been Christian in quite some time, and neither had the other guys in the band. Before his sentencing, he told Alternative Press:

I actually wasn’t the first guy in As I Lay Dying to stop being a Christian. In fact, I think I was the third. The two who remained kind of stopped talking about it, and then I’m pretty sure they dropped it, too. We talked about whether to keep taking money from the “Christian market.” We had this bizarrely ‘noble” thing, like, “Well, we’re not passing along any bad ideas. We’re just singing about real life stuff. Those kids need to hear about real life, because they live in a bubble.”

Tim Lambesis, 33, says he’s been an atheist since college. He also said renouncing Christianity made it easier to justify the affair he had that broke up his marriage to Meggan. (I’m sure plenty of other religious people take out hits on their spouses, too.) Ex-bandmate Nick Hipa posted to his Facebook page the opinion that Lambesis is “a sociopathic narcissist,” a view he said the trial’s prosecution shared.

The Tim Lambesis scandal provoked talk among the Christian music faithful about an industrywide issue. How do you prove someone is really dedicated to Christianity and not just the lucrative record sales of the Christian market? Are there any EDM DJs who secretly hate EDM and are just cashing in on what they know is popular right now? At one point in the post, Lambesis admits he felt awkward praying with fans and talking publicly about his faith, but he apparently didn’t feel awkward enough not to!

It’s hard to say how common renunciation of faith in Christian rock is, as there isn’t exactly hard data on this kind of stuff. In 2008, the Christian rock band Haste the Day (no relation to non-Christian rock band Saves the Day) kicked out guitarist Jason Barnes after he began doubting his faith. Barnes told an interviewer “it became increasingly difficult to square my Christian worldview with reality. The amount of mental gymnastics I had to put myself through to keep rationalizing my religious faith started to get really old.” Songwriter Taylor Muse, of the Texas band Quiet Company, has said he was only in Christian rock bands up until college, at which point he discovered Kurt Vonnegut and became an atheist. Josh Farro and his brother Zac left popular pop-punk band Paramore over faith-related issues in 2010, accidentally revealing that Paramore had sort of been a Christian band. Singer-songwriter Jennifer Knapp left the Christian genre behind when she realized she was gay, although she says “I’m still very serious about my faith.” Maybe public renunciation of a religious affiliation that propelled you into fame also happens to be a clever way to rebrand and announce that you’re starting a new project. As far as I can tell, all four original members of Stryper are still Christian, and one of them (Oz Fox) currently ministers in Las Vegas as “Hookers for Jesus.”

An IGN message-board poll about whether atheists listen to Christian rock solicited this personal testimony: “Yes. I have one athiest co-worker (he’s a metalhead) and while he brings forth anti-christianity and satanic jokes, he still thinks the Christian death metal band, Mortification ‘kicks ass’. He even wrote to them and stuff. Another athiest metal friend also bought a cd from the christian metalcore band, Advent.” As I Lay Dying is currently on hold while Lambesis serves out the rest of his sentence. It may no longer have a place in the Christian death metal scene, but I’m sure the felon-heavy Norwegian black metal scene would welcome the band with open arms.

I Tried Out to Be a U.S. Open Ball Boy and Saw Dave Chappelle, and All I Got Were These Two Lousy T-Shirts