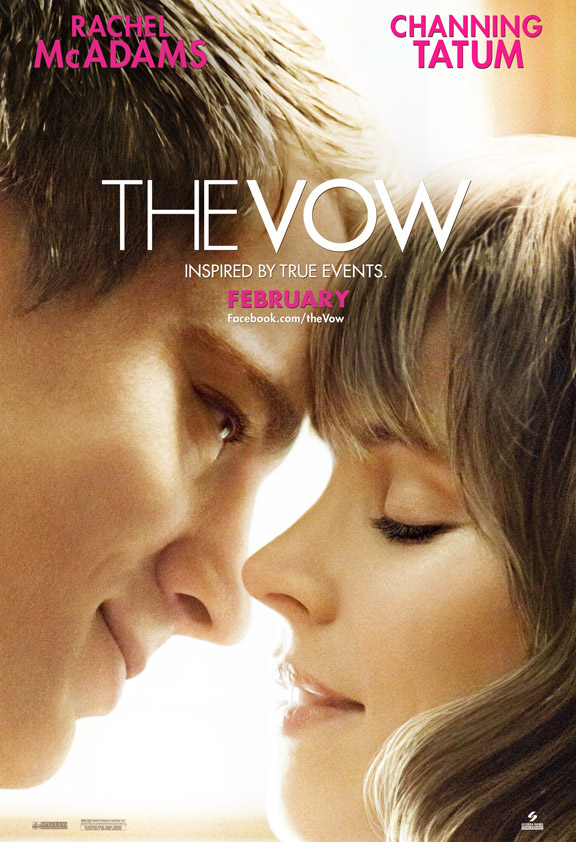 What the art says: In life, people consider kissing the ultimate sign of affection. In movie posters, the ultimate sign of affection is touching foreheads (see: here, here, and here).
What the text says: Rachel McAdams is a man and Channing Tatum is a woman. Why else put her name on his head and his name on hers? This film is also “Inspired By True Events.” After reading that, we had to make sure this wasn’t a thriller based on a true-crime story about a couple who vows to murder anyone who tries to pull their foreheads apart. Sadly, it’s not. The “true events” it’s inspired by involve a car crash, amnesia, and love. It’s like 50 First Dates with only one date. 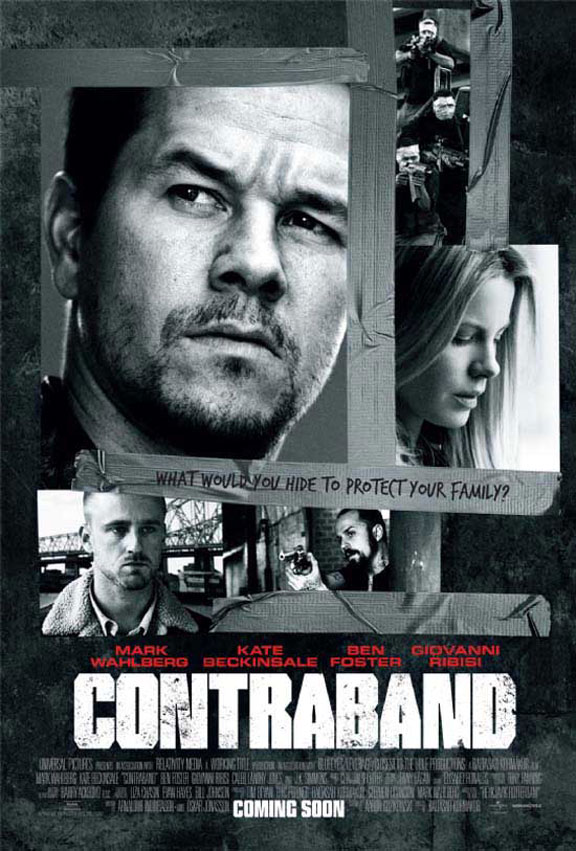 What the art says: Squinty, moody, a remake of an Icelandic film — this poster reveals much more about Contraband than the previous all-Wahlberg version. Most notably, it tell us that other actors are in it and that they will be sad (Kate Beckinsale, Ben Foster) or homicidal (Giovanni Ribisi).
What the text says: Not too much. Of course Wahlberg gets first billing and Beckinsale second. Foster edging out Ribisi for third billing is a bit of a coup, but still not that surprising. When you have two actors who are essentially the same person, count on the younger one to win the billing war every time.
Tagline: “What would you hide to protect your family?” There’s a lot not to like about this tagline. It’s as if this was stolen straight from FreeActionMovieTaglines.com. 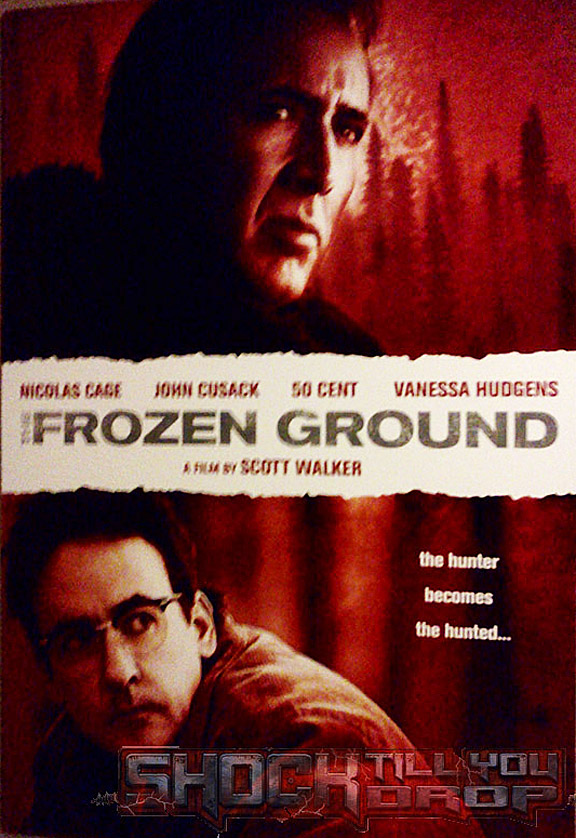 What the art says: Despite his best efforts, Nic Cage is still somehow getting cast in lead roles in major motion pictures. This one’s about a serial killer being tracked down by a cop and an escaped victim. What the art doesn’t make clear is if the killer is Cage or Cusack. Surprise, it’s not Cage! He’s hunting the creepy Cucask who’s playing a real-life killer who kidnapped strippers and prostitutes, released them in the remote Alaskan wilderness, and hunted them for sport. That must be why the trees in the background are soaked with blood.
What the text says: Cage is a bigger star than Cusack. Not much of a surprise, really, but is he such a bigger star that he deserves top billing over Cusack, who’s playing the main character? Guess so! Like in Contraband, the third and fourth names on this poster are in an unexpected order. Sure, 50 Cent is more famous than Vanessa Hudgens, but his name alone won’t bring teenage girls to theaters. Weirdest of all: “A Scott Walker Film.” More like “A Who Whatever Film,” right? Scott Walker is, according to IMDb, a 40-year-old Kiwi whose previous credits include a short film about a magic forest. If anything, the studio should have omitted his name to avoid any confusion with the governor of Wisconsin.
Tagline: “The hunter becomes the hunted…” Sure, it’s accurate, but man is this one over-used tagline. 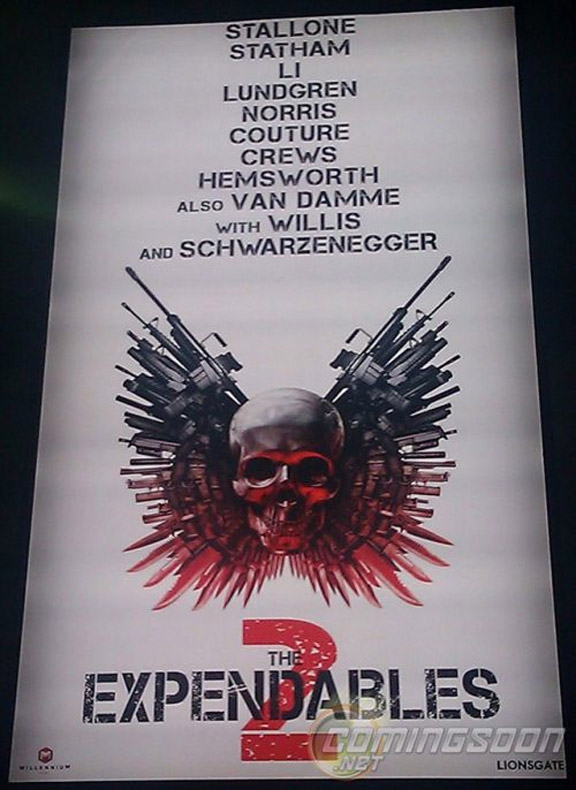 What the art says: This is what they call a promo poster, meaning nobody had time to spend on it so they just recycled the art from the first movie. But for as little as the art says here, there’s a whole lot in the text.
What the text says: Stallone gets top billing, obviously. This movie is his baby. And the next four actors are all household names. The following two guys, Randy Couture and Terry Crews, are known by anyone who saw the first Expendables but probably not their parents. Then — curveball — Chris Hemsworth! Star of Thor! Shouldn’t he be higher on this list? Well, yes, if it were him. But the “Hemsworth” referred to here is actually his brother Liam. After the also-rans come the big boys with small roles. Schwarzenegger (shouldn’t they have just listed him as Arnold?) gets the respectable “AND,” Willis gets the honorable “WITH,” and for being a whiny bitch about the original movie, Van Damme gets the coveted “ALSO.” Three people with last billing is pretty rare. When Steven Seagal agrees to be in Expendables 3, expect that number to jump to four. 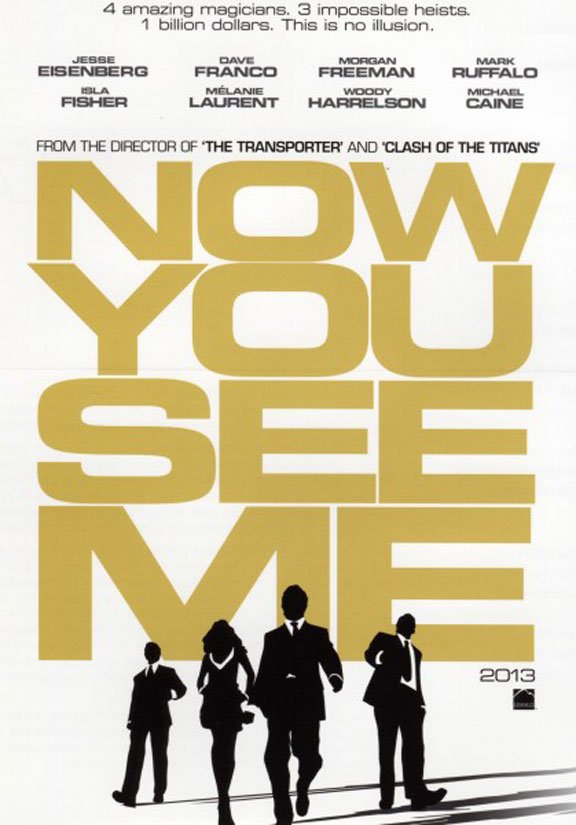 Now You See Me

What the art says: We haven’t had time to shoot any photos yet, so here are some silhouettes, which are marching toward the camera in classic heist-movie fashion.
What the text says: Jesse Eisenberg is a bona fide star. To get top billing over Morgan Freeman and Woody Harrelson is a victory for the awkward little runt. Also, it’s officially time to meet Franco No. 2. Those who’ve been paying attention to movies know James Franco has a little brother, but with second billing, even the idiots who use movies as an excuse to eat popcorn for two hours are going to know who he is. Also, doesn’t Michael Caine deserve an “AND”? Surprised he’d work for anything less. Name-checking the director as the man behind The Transporter and Clash of the Titans is a confusing move. Here we are expecting an Ocean’s Eleven meets Penn & Teller when we learn it’s directed by Louis Leterrier, known for schlocky action flicks. But if that means Isla Fisher is going to be jumping through the air with a gun, well, we’ll take it.
Tagline: “4 amazing magicians. 3 impossible heists. 1 billion dollars. This is no illusion.” It doesn’t immediately remind us of other taglines, which in the low-expectations world of movie marketing is a victory. The only thing we’d like to point out is that they forgot No. 2. Expect that to be corrected on future posters.