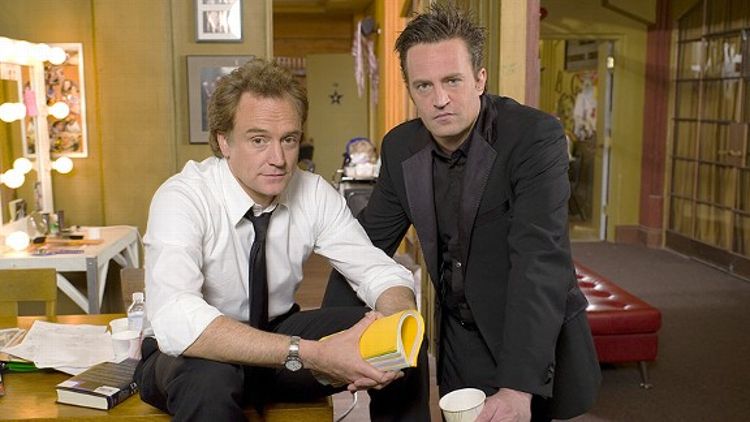 I am a mark for Aaron Sorkin, an unabashed fan. Let me start there. I have memorized West Wing speeches, worn out my Sports Night DVDs, Googled all the dirt on his upcoming HBO show, unapologetically cribbed from him on and off the air, and I know all the lines from A Few Good Men. And not just the Jack Nicholson ones either. But I have a friend who can’t handle that truth.

Over the years we’ve Billy Hunter-David Stern’d any number of topics: rueful missteps by the Celtics in the draft, the role of the WNBA, and Sarah Silverman’s place on the all-time greatest comedians list. But my Sorkin jag has remained a constant argument. A couple weeks ago, at an ungodly hour of the morning, he texted me a link to a story bashing Studio 60 on the Sunset Strip, Sorkin’s ill-fated dramedy that lasted a single-season in 2006 and 2007. The article? It was published two weeks ago. 1,581 days after the last episode of Studio 60 aired.

Studio 60 is the BRI of our unwinnable Sorkin argument. And we remain miles apart on it. So as I sit here, waiting for Paul Allen to fly in for the latest round of NBA labor talks on some Microsoft hovercraft and destroy any optimism that the two sides have spent hours working towards, I’m left with some time to wonder why. Why do people still want to fight about Studio 60? Why is the show’s failure still debated all this time later? And doesn’t the fact that people won’t let the show die make it, well, kind of not a failure?

First, some history. For those who don’t remember, or have blocked it out, Studio 60 was Sorkin’s much-anticipated and heavily promoted return to network television in 2006, three years after his even more heavily talked-about departure from The West Wing. After near-unanimous of praise for the pilot, it took little time before critics started tearing it down. After 11 episodes there was a hiatus … then a schedule change … some dramatic and questionable plot twists … the always deadly hiatus-combined-with-schedule-change that saw ratings plummet. Then, inevitably, cancellation.

In the days that followed, all 1,581 of them, Studio 60-bashing shifted into something resembling LeBron-coming-up-short-in-the-Finals glee.

These were the arguments:

If it was so good, why was it cancelled after one year?
There are no shortage of reasons: Was it “too smart” for the audience? Maybe. Was Monday night during the football season the best place to schedule it? Probably not. Did the simultaneous debut of similarly themed underdog 30 Rock create an ER/Chicago Hope vortex in which only one show could survive? Possibly. But I do know that television tenure is a complicated formula into which quality doesn’t always factor. Think Arrested Development. Think Freaks and Geeks. Think Terriers.

It wasn’t a realistic portrayal of a late-night comedy TV show.
Really? This is a concern? The realism of a prime-time network show?

Sorkin’s ego made it a massive homage to himself.
Let’s put to the side the fact that ego is responsible for so many good things. That behind every great movie, baseball trade, and Terrell Owens reality show was someone who believed in himself more than anyone else did. Does Sorkin have an ego? I’ll take a wild guess and say yes. Is he fascinated by megalomaniacal, status-chasing characters like Mark Zuckerburg and David Sarnoff? Yes. Point is, his big ego is not really a deal-breaker for me.

I’m not smart enough to know if Studio 60 was everything it could have been. Actually, I am. I’m sure that it wasn’t. But I know it was great television. It was smart, funny, and had one of the greatest prime-time casts ever. Period. Bradley Whitford. Matthew Perry. Stephen Weber. D.L. Hughley. Amanda Peet.

The pilot grabs you. The early two-parter “Nevada Day” — in which the gang road-trips to Pahrump, Nevada to bail Tom out of jail — is a classic. The guest stars (Ed Asner, John Goodman, and Judd Hirsch) made it feel big-time. The Christmas episode — in which the show-within-a-show’s band calls in sick to create work for New Orleans musicians who had been homeless since Katrina — is a staple in my house every year.

But hey, decide for yourself — the beauty of Studio 60‘s too-short life is that you can watch the whole series before a David Stern ultimatum runs out. Check out the pilot on YouTube and see if it grabs you in between pop-up ads.

And what if he does? Will we still be tweetsnarking his failures? Sorkin nailed Charlie Wilson’s War, then won an Academy Award last year for The Social Network. And yet 1,581 days later, a fresh new Studio 60 dissection is only a Google alert away.

We kill Lebron. We bash Joe Buck. We boo John Cena. And we trash Aaron Sorkin. And these are the best guys we have.

Sean Grande is the locked-out voice of the Boston Celtics. After 20 years of play-by-play for the NBA, ABC Sports, Fox, Comcast, Westwood One, and ESPN, he snarks 140 characters at a time on twitter at @SeanGrandePBP.