Planet of No Apes: Watch Three Short Films Set Between ‘Rise’ and ‘Dawn’ 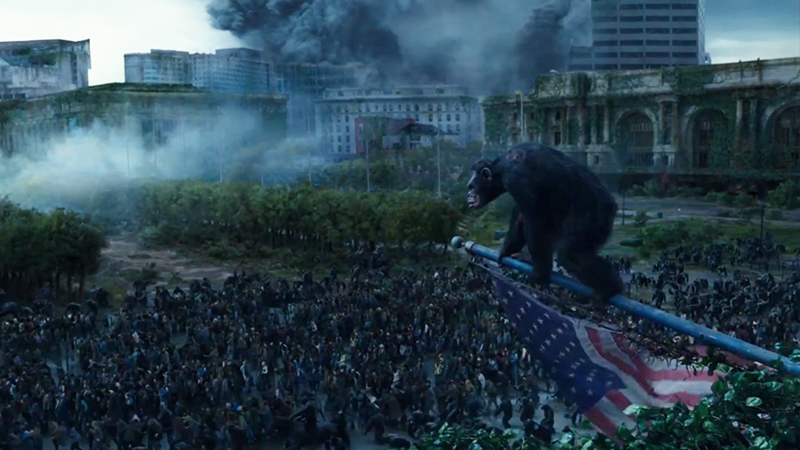 Rise of the Planet of the Apes

Fair warning: Rise of the Planet of the Apes will be discussed throughout this post. So will the amount of time that has passed between Rise and Dawn.

Dawn of the Planet of the Apes is coming out in a week and a half. It might be the best gigantic movie of the summer. The first of the series, 2011’s Rise of the Planet of the Apes, wasn’t just better than it had any right to be — it was spectacular. Andy Serkis, the motion-capture genius behind Lord of the Rings/The Hobbit’s Gollum and Peter Jackson’s King Kong, brought lifelike CGI to the next level, and early reports are saying he’s done it again with Dawn. Plus they got rid of James Franco! So it’s an excitement-worthy movie, definitely. Which makes it nice to have these three short films put together by 20th Century Fox and Vice’s Motherboard. Although apeless, the Before the Dawn mini-trilogy doesn’t feel at all like Spider-Man-y promo bloat. The shorts are also especially welcome because Dawn takes place 10 years after Rise. There’s ground to be covered.

“Quarantine” (above) shows the Simian Flu hitting hard in a heavy story about trying to live normally in humanity’s new hellscape. Rick Rubin shows up with a shotgun, and people once again prove themselves to be The Real Animals. There’s also some of that Concerned End-Times Parent flavor, like in The Road. It starts and ends like a music video for a synth band. It’s sad. There are no apes, talking or otherwise.

In “All Fall Down,” we’re five years into the ape-ocalypse. The Simian Flu has killed off 90 percent of humanity. Parents are still struggling to enjoy the company of their children while subsisting in a violent non-society. The art director probably shops at Anthropologie. The land is lousy with spaghetti thieves and pasta sauce bandits. The Past Is Not Coming Back, and There Is Still So Much Left to Lose. Still no apes, but they’re implied, and one leaves behind a very intelligent-looking footprint.

The final film, “The Gun,” takes us to the decade mark. It’s much longer than the first two clips, running nearly 11 minutes. Humans are still The True Savages. More implied apes, this time chasing and murdering a gun-guy. Ten years before that, gun-boy had parents who died of the Simian Flu. (This new Planet of the Apes team was smart to just allude to the flu stuff in the first movie, yada yada it through some short films, and continue maximizing the big-screen ape awesomeness.) A classic dusty conspiracy theorist gives us the only laughs — and the best performance — of the trilogy. But the point is that the gun traded hands a bunch of times before the apes got their hands on it, as evidenced in the haunting trailers for Dawn, with all the armed-apes-on-horseback firefights. In fact, it’s probably the first gun the apes got their sign-language-adept hands on. Kinda cool.

More Rise of the Planet of the Apes

See all Rise of the Planet of the Apes

“Series Four! At last! It’s always special to return to ‘Sherlock’ but this time it’s even more special as we’re doing… a Special! Not only that, we’ll then be shooting three more episodes which will take Sherlock and John Watson into deeper and darker water than ever before. The whole ‘Sherlock’ team are terrifically excited to return for four new adventures. The Game is on — again!” -- 'Sherlock' is coming back, Cumberbitches. (And Freemaniacs, we guess.)