The summer after he won the Best Actor Oscar for playing Truman Capote, Philip Seymour Hoffman played the villain in the third Mission: Impossible film. The timing was thankless: A great actor had come into his own and was immediately strapped to a Hollywood conveyor belt and dropped into a can of blockbuster. But Hoffman took the part more seriously than you’d think. He was playing an international arms dealer, so Capotian camp and prissiness wouldn’t play. Instead, he went for terror. At some point Tom Cruise & Co. get Hoffman, tied up, on their cargo plane. Cruise barks a lot of questions and Hoffman calmly uses his baritone to threaten the lady in Cruise’s life and promises to kill him in front of her. Hoffman was smart about how to play the mouse. He would just drive the cat insane.

Hoffman died Sunday morning, and the “greatest actor of his generation” motors immediately began to rev. He was 46 and was never rock-star famous like Robert Downey Jr. or Johnny Depp. He didn’t have the same grandiose vanity of a technician like Sean Penn. Hoffman didn’t have to be the center of a movie. His iconic roles, to my mind, were all on the stage — in True West, Long Day’s Journey Into Night, and Death of Salesman. But he was the kind of film actor who made a movie better and more interesting just by holding a glass of whiskey or waving his hands or letting a pair of windowpane glasses inch down the bridge of his nose.

Before Capote, he mostly played the schlubby irritant who mocked typical actor vanities. You were drawn to his weirdos, freaks, losers, and assholes — to their nastiness and cruelty — because the actor playing them didn’t seem to have a long game. He didn’t want stardom. He didn’t care what we thought. If he wanted to play a guy who makes obscene phone calls and masturbates (as he did in Todd Solondz’s 1998 tonal masterpiece Happiness), then he would. If he wanted to spend Paul Thomas Anderson’s Boogie Nights desperate for Mark Wahlberg, so be it.

For a lot of those earlyish performances — as the prepster in The Talented Mr. Ripley, as Jason Robards’s home-health nurse in Magnolia, and as the rock critic Lester Bangs in Almost Famous — he was a dysfunctional Baby Huey. Throughout his career, Hoffman’s portly carriage gave him something to work with. It gave him a physical gravitas that he could adjust as needed. In Ripley, he had an insinuating lightness. In Charlie Kaufman’s Synecdoche, New York, he looked as sunken as his artistically overextended playwright was. He was thinner for Capote, but he played the part with the overcompensatory fabulousness of a former fat person.

In the same way he could make the substance of body seem to fluctuate, he could also alter the tone of his vulgarity. There’s nary a Philip Seymour Hoffman character you’d bring home to meet your mother. (Of course, he was the sort of actor whom any mother would recognize as being very, very good.) Few performers could turn the distance between cockiness and misery into a spectrum, but most Hoffman characters land somewhere on it. He gave us men of delusional self-confidence and crippling self-doubt, men who were brash and baleful. Depression was never far from the surface of his performances. Neither were humor and anger. This is to say that he could manage dualities. There appeared to be no difference for him in acting opposite Amy Ryan or Meryl Streep, between working for Charlie Kaufman or J.J. Abrams, between playing a prep-school brat and A’s manager Art Howe, between a work of art and a piece of shit. He might have cared too much, but Hoffman wasn’t naive. Along Came Polly was a romantic comedy with Ben Stiller and Jennifer Aniston. Hoffman played a cater-waiter who said whatever came into his mind, including a spiel on “sharts.” He knew he was in a stink bomb. Rather than steal the movie, he sharted on it. 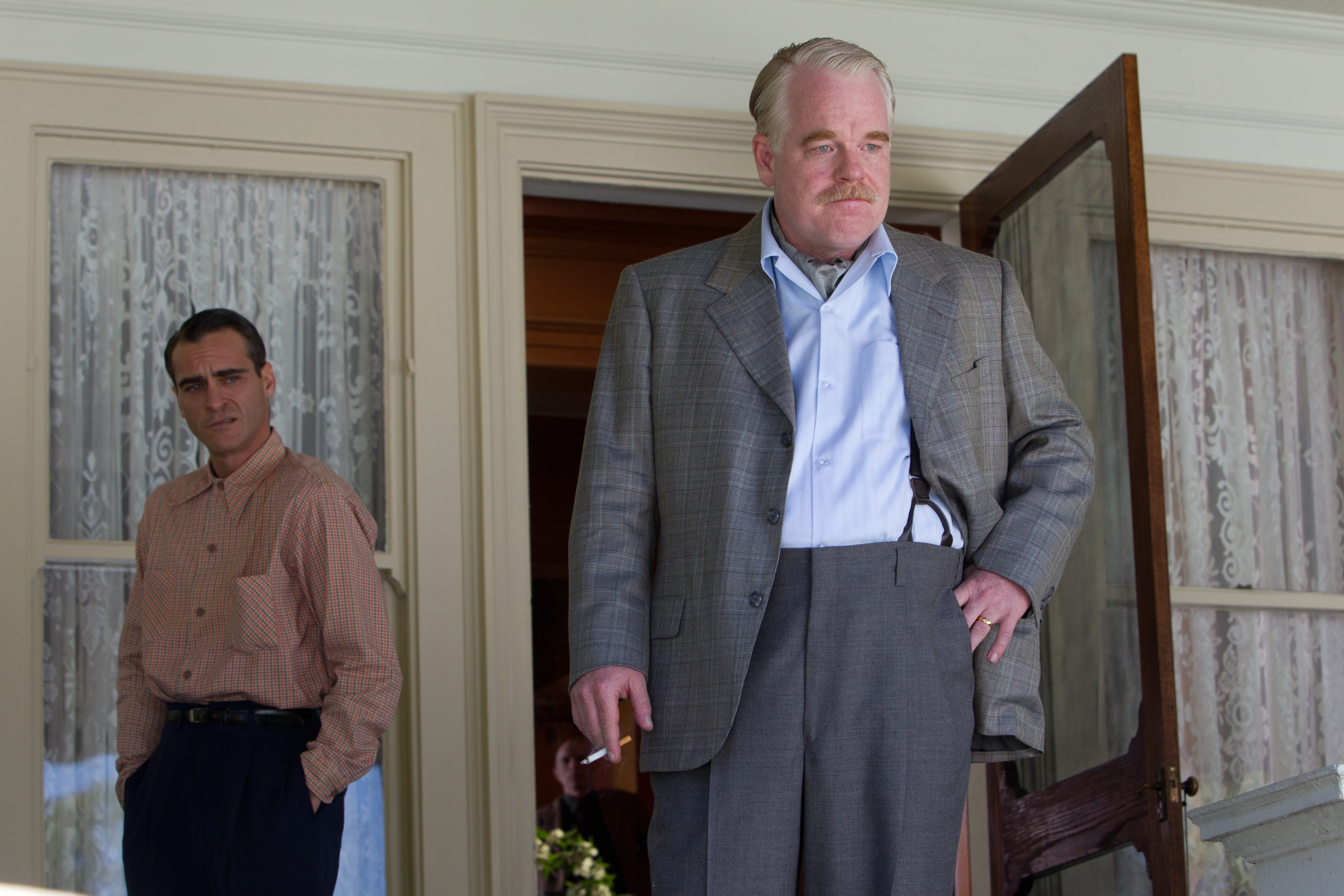 In a great movie like Anderson’s The Master, from 2012, you get a clear picture of what we’ve lost in Hoffman. For Anderson, he played a spiritualist named Lancaster Dodd who develops a following for his principles of elevated existence. It’s called the Cause, and the central mystery of the film is whether Dodd is a charlatan or not. The assumption is that the film was about the birth of Scientology. It’s not not about that, but I think the film would have been better received and better understood as a parable of film performance and the practice of the Method.

In any case, Hoffman brings all of his creative impulses to bear on the part — the appreciation of artifice, the quick temper, the vulgar lunacy. This is his Lester Bangs or his spoiled bully from Mr. Ripley learning how to harness their charisma for sinister ends. It’s a gargantuan piece of acting (mysteriously, it was deemed a supporting part, which is like mistaking the Chrysler Building for a Chrysler) that demonstrated the rare kind of lead-character work few performers get to do at that scale. Meryl Streep, Cate Blanchett, Leonardo DiCaprio, and Daniel Day-Lewis are almost alone at the top, with someone like Paul Giamatti (who’s Hoffman’s age) nearby but in need of more great parts. Now they’re one peer fewer.

Praising an actor’s fearlessness seems to miss the point of acting. Fearlessness is part of the job. But that term has become a benchmark against what American movie acting often is now: psychology-free posing. Often what people talk about when they talk about fearless acting is “realness.” Philip Seymour Hoffman had the realness of the great actors from that 1970s class — Pacino, Hackman, De Niro, Voight, Dustin Hoffman. Like his forebears, he wasn’t immune to a little showboating. He has a scene in Mike Nichols’s Charlie Wilson’s War, from 2007, in which his testy CIA agent directs a foulmouthed tirade at his boss (John Slattery) that ends with him re-breaking the office window he shattered during an earlier tirade. When he’s done, he heads out of the department and says to a bashful-looking secretary, “How was I?” The secretary sneaks him a thumbs-up. We all do.

It's Like 'All Is Lost,' But It Lasted 13 Months and Maybe the Robert Redford Character Is Lying