Pharrell Completes Cultural Takeover by Becoming a Judge on ‘The Voice’ 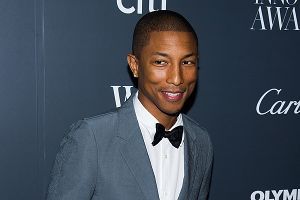 As far as we can tell, purely on the merit of his “Move That Dope” verse, Pharrell Williams has been tapped to judge Season 7 of The Voice, which will begin airing this autumn. It’s still unknown if the show will do another lineup swap (we’re currently in a Shakira/Usher phase; Adam Levine and Blake Shelton are always around), but Pharrell will definitely replace CeeLo. It won’t be the hat-master’s first time in the mix, either — he was an adviser for Usher’s team back in Season 4.

Dawn of the Planet of the Apes has a TV spot that’ll give you at least two nightmares.

The Walking Dead’s Season 4 finale scored 15.7 million viewers, making it — surprise, surprise — the most-watched finale yet. It seems like this thing will never stop growing in popularity, BUT: “It’s the first time a finale for the show hasn’t surpassed that season’s premiere (last fall’s return was seen by 16.1 million same-day viewers).”

Julian Casablancas on the Strokes: “We’re trying to carry on as friends, taking it easy, recording a couple of songs, and do a couple of shows.”

Kevin Costner wants to make three or four westerns all together and release them in the span of a year.

John C. Reilly is joining Rachel Weisz, Colin Farrell, Léa Seydoux, and Ben Whishaw in The Lobster, which sounds positively wild. It’s set in a dystopian future where “single people are arrested and obliged to find a matching mate in 45 days at The Hotel. If they fail, they are transformed into an animal of their choosing and released into The Woods.”

Elton John and David Furnish are getting marriaged.

And Alicia Keys and Kendrick Lamar did a track for The Amazing Spider-Man 2. Hans Zimmer and Pha–“I Am a New Voice Judge”–rrell produced it together. [via]