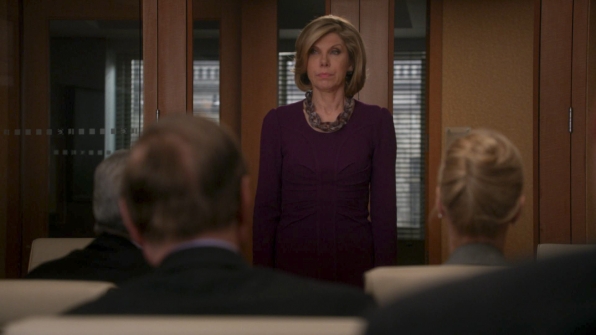 As of last night, we’ve officially entered the post–Will Gardner world. Josh Charles’s exit leaves a major void on The Good Wife. The show loses its male lead, Lockhart Gardner loses one of its named partners, and Alicia (Julianna Margulies) loses her main love interest. (Other than her husband, of course.) Since Season 1, the show seemed poised to end with Will and Alicia finding their way to each other, though they’ve been feuding ever since she defected to start her own firm at the beginning of the current season. The March 16 episode included a diner détente that suggested that perhaps their reconciliation would occur sooner rather than later. I suspect that glimmer of hope, in addition to last week’s scene where they shared a laugh one day before Will was shot, is what enraged so many fans. How could Will die just as Willicia seemed poised for another go? It’s hard to close the book on one of TV’s sexiest couples, but as Mark Harris wrote last week, The Good Wife has never been about any OTP couple. The premise of the show is a woman on her own, which creators Robert and Michelle King reinforced with their open letter to fans last week. Even though the Josh Charles era has ended, I’ll continue watching to see how the other woman in Will’s life handles his death. Diane Lockhart has to take the reins of the firm now, and the biggest question is what will she wear while doing it.

We should have known that Will was in trouble last week when a serious, soft-spoken Diane crashed his meeting. Though it seems Jeffrey was innocent of the crime for which he was on trial, Diane was suspicious of him all along. She walked into the conference room in one of her standard work outfits: perfectly tailored sheath dress, chunky necklace to modernize the look, coiffed bob hair cut, black plastic glasses that are neither circular nor square but something in between. The glasses are a signature Diane piece. Even if they are on-trend, she strips them of any context but the impossibly smart appearance that defines the character. Only the best Diane ensemble (of which there are too many to enumerate) would be fitting for Will’s last days. She shows up in this scene to make sure a guilty verdict in the case wouldn’t be Will’s fault. In other words, she shows up to fill the role that Will so frequently forced her into: the adult in the room. She certainly looked the part as she asked him with grave circumspection about the strategy and the client.

Last night she began her solo reign over the firm. Her hair was slightly askew and makeup was less than pristine, but otherwise you might have accused her of not mourning enough. Armed with another killer chunky necklace and a purple dress, she quickly took command by deciding who got to grieve and how much. She fired an inconsolable, hysterical intern who barely knew Will, she fired a lucrative client for hardly caring at all, and she paused her feud with Florrick Agos to warmly embrace Alicia when she showed up at the Lockhart Gardner office. Diane says she loved Will and calls him his best friend, and heartbreak in the moment drives her leadership. It’s hard to think of another fictional female who would respond to a loss in the same way. She’s not interested in dramatics, which has always made her a worthy foil to both Will and Alicia.

As the show forges ahead without the beloved Will, Diane is the obvious choice to fill the Will void at Lockhart Gardner in leadership and screen time. The fact that she’s already ensconced at the top helps, but the importance of Diane speaks to the show’s broader ethos. The Good Wife is like the San Antonio Spurs of television: It’s a great show that remains underrated even though plenty of critics frequently lament the fact that it’s overlooked. Maybe advocating for it by way of Diane’s fashion does little to ameliorate its failure in wider appeal, but her presentation represents the show’s driving principles. The Good Wife is about adults and for adults, and Diane is the perfect emblem of that. She’s not the showy performer that Will was in courtrooms and depositions, and she’s not a minor celebrity like Alicia who is constantly seeking reinvention. She’s powerful because she’s serious and steadfast, which has been communicated to us through Christine Baranski’s consistently impressive performance and the smart way she dresses. Diane is the moral compass in the Good Wife universe, morally superior to nearly everyone. She manages to stand tall, and not just because of her high heels. Even when Diane falters, like when she loses the judgeship nomination because of Peter’s political games, she picks herself back up and finds her moral center. While the erratic Kalinda seems to have an endless collection of leather jackets, and Alicia sticks to a more typical political wife array of pantsuits and peplum, Diane’s careful tailoring has become shorthand for her power.

Filed Under: TV, The Good Wife

Pharrell Completes Cultural Takeover by Becoming a Judge on 'The Voice'