Oprah’s Lindsay Lohan Reality Show Is Almost Here, Whether You Want It or Not 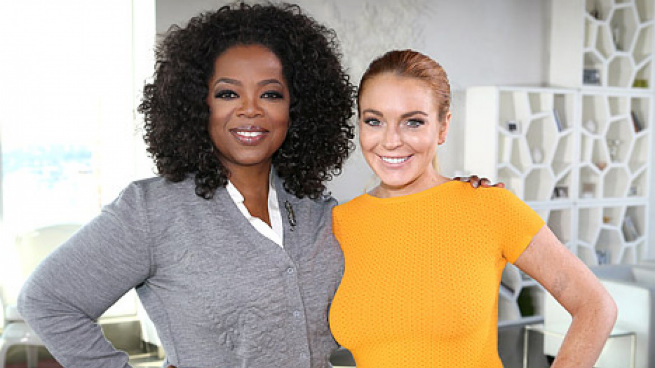 Did you forget that Lindsay Lohan was still doing a docuseries with Oprah? I tried to forget, but somehow the information would not leave my brain, just like all the other pertinent information about Lohan I wish did not take up so much space in my hard drive. But break out your bottles of Sevin Nyne tanning spray and put on your worn-out copies of I Know Who Killed Me and The Canyons, because this Sunday on OWN, it’s time to give Lindsay Lohan a chance! Again!

In the trailer, which was released yesterday, Lindsay doesn’t even sound like she believes herself lying about how she no longer is interested in drinking or partying. And if Lindsay doesn’t sound believable to this viewer, she’s obviously not going to get past OPRAH. Other on-camera appearances include LiLo’s evil stage mom enabler Dina Lohan, her embarrassing famewhore father Michael, and her sober coach, who lets out a pained sigh when asked if Lindsay is staying sober. The title? A simple Lindsay.

The director is Amy Rice, who made a documentary about Obama getting elected, and was a cinematographer on the Stella shorts, still photographer on Wet Hot American Summer, and writer on two episodes of The Newsroom. Rice does all the heavy lifting in terms of following Lindsay around in her day-to-day activities, and also appears onscreen to apologize for the actor’s chronic inability to show up to the jobs she has actually been hired to do, while always making time to go out. Oprah is there, too, watching over the festivities like a god, and also showing obvious exasperation when told that Lindsay has shirked off her responsibilities while living in an expensive New York apartment that Oprah has been paying for. Oprah’s problem is the same problem everyone else in Lindsay’s life has had with her: Lindsay will never get better; she hates being told what to do and will always instinctively rebel, even as that act gets less cute with every passing year. When Oprah tells Lindsay to cut the bleeped-out bullshit, Linz responds in the same vocal-fried passive-aggressive tone she has always used to deflect any and all criticism.

The Lohan spectacle for OWN was announced last summer, and Lindsay’s last few acting projects have not proven she is ready for the massive comeback as an actress she’s always preparing for. She made a much hyped cameo on the Eastbound & Down finale, but anyone looking for a fireworks display of comedic timing and charisma from Lindsay was disappointed. It’s been 10 years since Mean Girls, and while she may have a gritty indie or two in her yet, it’s pretty much lights-out for Lohan the A-list movie star. She is something else now entirely, and not all that surprisingly: Lindsay Lohan, reality star.

On the other side of the drug cautionary tale spectrum is Russell Brand, who is also being interviewed by Oprah for “Oprah Prime,” a rebrand of the existing OWN series “Oprah’s Next Chapter.” The Brand special will air on Sunday night, the same night as the premiere of Lindsay. Brand reflects on his past struggles with addiction, and will apparently relate it to the death of Philip Seymour Hoffman in a way that already sounds pretty tacky. The episode will also have personal stories from other former addicts, and will explore the addiction issue from a more macro POV.

OWN, which not too long ago was seen as a failure, is now a thriving channel that regularly posts incredibly high viewer numbers — February was its best month since launching. The Tyler Perry drama The Haves and the Have Nots is the most-watched cable show on Tuesday nights, and Oprah just announced a biopic about Twenty Feet From Stardom star singer Darlene Love. Lindsay still needs Oprah, but Oprah doesn’t even need Lindsay for ratings anymore.

‘Justified’ Recap: ‘Whistle Past the Graveyard’ Spins Its Wheels