‘Justified’ Recap: ‘Whistle Past the Graveyard’ Spins Its Wheels 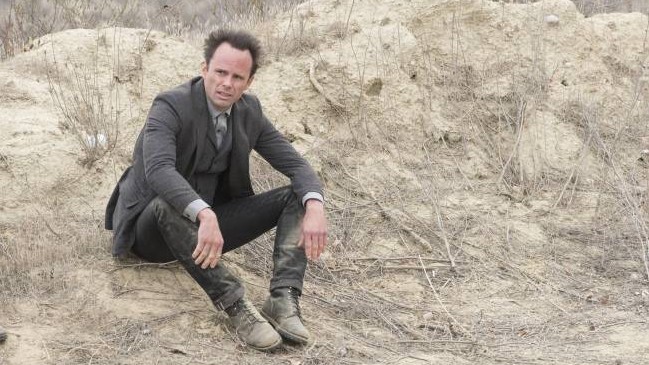 Previously on Justified: Raylan learned some tricks from a one-legged technophile, asked Art for a transfer, and took off on vacation; Wendy got Allison suspended; Ava edged her way into the prison drug trade; and Boyd killed Johnny in a firefight started by Danny and began his escape from Mexico.

Tonight: How bad is Raylan at throwing people out of Kentucky? Bad enough that the Crowes get their own entire episode with two separate plots devoted to their antics.

We meet Kendal’s Uncle Jack straightaway. He has a black and red Chevelle, and one-earpieced sunglasses he wears with disproportionate confidence. He’s been making money out west setting up poker games, with the hope of buying into the fracking business. He doesn’t talk like a Crowe. And if the way he acts, around Kendal and Wendy both, makes him sound more like a deadbeat dad than a ne’er-do-well uncle, well, hold that thought.

And the second Wendy’s out of the room: “So, you like it here?” “I hate it here.” And that’s all it takes. Jack wants to take Kendal to a roller coaster park. Kendal consents, initially with the air of someone who’s heard nothing but broken promises for a very long time, but warms up when blowing off his sister’s calls. He wants to believe, and that’s hard for him, for so many very good reasons. How do y’all reckon it’s going to work out for him?

Raylan, proffering a new bikini (IMAGINARY SIDEBAR: Picture Raylan purchasing a woman’s bathing suit) and flush with cash from his Caller 7 scheme (which apparently wasn’t just a bitter joking aside to Art last week), is inviting Allison along on his Florida trip when Wendy calls. Hit in her worst weak spot — Kendal — she has the presence of mind to hit Raylan in his — pretty ladies — by offering to withdraw her complaint against Allison, and our intrepid hero is off, chasing Uncle Jack and whoever is chasing Uncle Jack.

Meanwhile, add “lying to children” to “fleeing,” “negotiating,” and “keeping a low profile” on the no doubt voluminous list of tasks at which Jack does not excel. “I’m not a kid anymore,” says Kendal flatly, which, HOW TRUE. Jack thinks Kendal should go home; Kendal, not stupid enough to buy his own words but trying so hard, says Jack can handle his pursuer. His dogged belief cracks when Jack attempts to steal a car and goads Kendal into revealing what’s by now an unsurprising bit of information: He’s Wendy’s son, not little brother, and Jack’s his father. This is right about the time Michael shows up again, and Jack takes to his acknowledged parenthood by running away and leaving his son in a parking lot with the father of the man he put in a coma. Hand it to the guy: it takes some doing to make the Crowes look like sympathetic guardian figures. “What a pussy,” says Michael, and the camera cuts away before Kendal can agree. (IMAGINARY SIDEBAR: On first viewing we were thinking these two were in for a “Ransom of Red Chief” plot detour, but they probably have about the same opinion of Jack. Maybe they’ll be buddies!)

Later, reunited with Kendal, Wendy tries to confess to being to a bad mother while still talking to Kendal like a sister; it will not surprise you to learn he is Not Having It. Raylan, trying a fatherly sermon, has about as much success as Wendy, although his suggestions for Kendal’s future — the Navy, backpacking around France — aren’t bad at all. It goes better when Raylan brings up Arlo. That’s a first, isn’t it?

When we rejoin Boyd’s ragtag band of narcotics pioneers, the survivors of the south-of-the-border road trip (that’d be Boyd himself, Jimmy and Carl, and the three elder Crowe boys) are being held at gunpoint at the scene of their unexpected gunfight while Ruiz complains into a cell phone about having to bury them. The survivors will continue to draw breath, apparently, and to do business with Mr. Yoon, on the condition they make their victims’ bodies disappear across the border. How far do we figure the Kentucky commandos can push Ruiz and Yoon, anyway? Remember how scary they tried to come off in that initial hotel meeting, and how forgiving they’ve been since? Is this, like, a startup drug barony with a foosball table in the conference room and nobody over 35 on the payroll?

Daryl and Danny have a smuggling connection named Flores, a man they say can help them get the bodies and the heroin back into the States, and Boyd drops the thesis of his season, straight up: “Needing you and trusting you are two altogether different things.” Several interruptions later (the best one being a run-in with the law that lets Boyd put his preacher face back on), we meet Flores, who unleashes some sinister mutterings in Spanish caught by Jimmy, who is an absolute sleeper-hit pick for season MVP, isn’t he? Boyd’s in a nominally better position to be able to reestablish his business and help Ava, but isn’t it convenient how dependent he currently finds himself on the Crowes and their connections? And will his perpetual saving grace — being a step ahead of everyone who tries to double-cross him — be enough to help him stave off the Crowes’ encroachments and spring Ava? And if it comes down to one or the other, then what?

Still. Too still. And bizarrely immaculate from the truck fight on. His hair maybe knew before Boyd did that the Crowes bear him ill will.

ALLISON: Have we seen the last of her? It’s a bit of a strong switch-flip from her attitude toward Raylan in their first scene and their last, and that’s not the first time this season that’s happened. Rachel’s voiced suspicions of her more than once, and whether it’s Florida or Kendal or her job status or something else, or whether everything just got too weird in too many different ways too fast, even with her clearly stated breakup, we reasonably suspect she’ll be back in some capacity.

AVA: With a theatrically dislocated shoulder and a smooth lie about being an athlete in her youth, Ava secures a connection to bring heroin into the prison, and gets a great moment where she tells Judith how she dispensed with her first husband. Everything’s in place but Boyd now, and doesn’t it seem funny how Judith keeps bringing up the ways men can ruin the lives of women?

Two tires and Kendal’s heart, whatever was left of it.

Plot Detour of the Week

The half-unseen fight in the back of the truck. Remember last week’s reverie about the backseat fights among the supporting henchbillies? Just add corpses!

Kendal being on the way to school when Jack picks him up.

1. “We’ll hide ’em underneath all that heroin.”

4. “I hope they’re talking about breakfast.”

8. “If I went after every white boy who got with my sister, I’d have blisters on my gun hand.”

9. “I’ll wager you a crisp Ben Franklin that you do not.”

• What’s with the Art vs. Raylan thread, which feels abandoned? It’s certainly plausible that they could descend into mutual hurt and not-speakingness, and understandable to want to save the climactic clash for some time closer to the season finale, but as a viewer, it’s dramatically frustrating. This week in particular took Raylan away from his fellow marshals, whose reaction to his Nicky Augustine confession and its consequences is — and we’re just speaking for ourselves here — what we want to see the very most. We’re mercifully spared this week from a bureaucratic fallout scene resulting from Raylan doing marshal-type work on vacation, so that’s something.

• Seriously, what’s Wendy still doing here? Especially with Kendal being her son? This isn’t a criticism; we’re asking. What’s she up to that’s more important than her kid’s rapidly deteriorating welfare? And we’re not up on our daytime television programming, so correct us if we’re wrong, but isn’t 22 a little old to feel the need to raise a son as a baby brother?

• Did you ever think the Crowes would end up being more trouble for Boyd than for Raylan? How far can Boyd push Ruiz and Yoon? Where the hell is Wynn, whose sadistic charm would’ve been so very welcome on this trip? Will these interruptions continue for the rest of the season, with the Crowder crew dividing the distance between them and the American border in half, and in half, and in half again each week, getting closer and closer to home but never arriving thanks to a never-ending stream of lawmen, murder opportunities, and corpse-rasslin’?

Oprah's Lindsay Lohan Reality Show Is Almost Here, Whether You Want It or Not

Must Read: “A Train, a Narrow Trestle, and 60 Seconds to Escape: How ‘Midnight Rider’ Victim Sarah Jones Lost Her Life”