‘Justified’ Recap: A ‘Raw Deal’ for Nobody 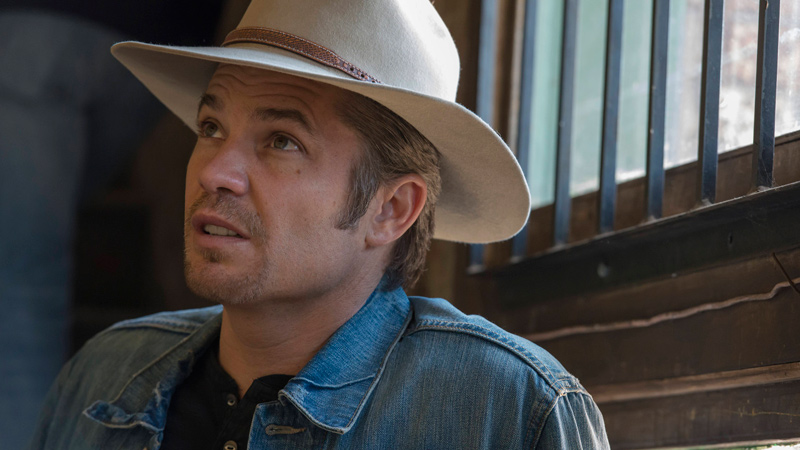 Previously, on Justified: Art punched Raylan real hard; Danny assaulted Allison with a truck; Boyd’s plot to have Ava protected by loyal skinheads ended in violence on both ends of the plan; Boyd and the Family Crowe forged an alliance that will in no way end in heartbreak (or head shots) for all involved.

Tonight: Raylan learns about computers! Ava channels the entrepreneurial spirit that made her fiancé the man he is today! Boyd takes his brood on a field trip!

Our intrepid hero’s main story line this week veered straight into slapstick more than once. Everything from Raylan’s first scene in the hour — from an exchange concerning breakfast sandwiches with the minor Marshal who served as his behatted decoy in “Decoy,” to the imperious drop-in visitor to the Marshals’ office demanding the return of his online backgammon winnings, to the auto-defenestrating chase scene featuring a one-legged fugitive, to Raylan arguing with the waitress — could be fittingly soundtracked by a noodling clarinet.

The Mystery of the Missing Backgammon Bitcoins or Whatever, seemingly crashing into the show’s universe out of nowhere, is quickly tied in to the arrest of Charles Monroe, whom we haven’t seen for a few weeks, and whose first name we have thought was Richard for no apparent reason this entire season. As a villain, TC’s business plan seems solid. His overt sexism seems over-the-top for just a second, right up until the exchange about the “Pro Series” controller, because we all know that guy, and if you don’t know that guy, you might ought to consider whether you aren’t that guy. The reveal of his missing limb is a well-executed bit of comedic timing, and it gives Tim Olyphant reason to look simultaneously irritated and bemused, a combo move at which he excels.

From there the plot borders dangerously on caricature, with Raylan’s early-onset dad-life gruffitude pitted against a guy who’s such an over-the-top stereotype of a pissant hacker/blogger type that he is actually captured hiding out in his grandma’s basement. We will contend this works within the framework of the episode for a couple of reasons: It gives Jacob Pitts and Erica Tazel (especially Pitts) some delightful opportunities to needle Raylan (“How many legs this guy have with him?”), opportunities which all involved sorely need. And it gives the characters of Tim and Rachel (particularly Rachel) a vehicle through which to express their annoyance with whatever Raylan’s done to throw a frost over their work environment.

Most crucially, it’s a giggle valve that keeps every moment Raylan’s in the office this episode from being a complete dirge, and provides stark contrast for his final scene in the hour, the latest confrontation with Art. I don’t need this shit, says Raylan. Come on, Art, says Raylan, like he didn’t just IMPLICATE THE U.S. MARSHALS IN THE ASSASSINATION OF AN ORGANIZED CRIME FIGURE. Art, having none of his deputy’s patented mix of charm and belligerence, reveals a keen perception of just what will hurt Raylan and a willingness to deploy it (“Goin’ to see your kid, huh?”), and even with Raylan asking to get out of Art’s command, you get the sick feeling these two aren’t done saying things they won’t be able to take back.

Before we get to the killing, take a moment to consider another comedic deviation, one that’s left offscreen but contains enough possibilities to boggle the senses: Boyd, Carl-and-Jimmy, and the elder Crowe boys have, during the course of this episode, driven from Harlan to Memphis to Mexico. Imagine them all in one vehicle. Imagine the fights over the radio station. Imagine Carl sniping about his treatment during his kidnapping and bragging about his escape. Imagine the kind of shit Danny would say to a Dairy Queen drive-through worker. Imagine Danny having to ride the rest of the way in a large dog crate in the back. We’ll wait.

We now return you to the desert of Boyd’s discontent, and the Crowder cousins sharing a handcuffed heart-to-heart on the front steps of Yoon’s estate, and Boyd intoning, “The life we chose can only end one way, and I’ve been at peace with that for a very long time now,” which is a straight-up lie that doesn’t make sense until the truck’s door rolls up in the dark later on and his cohorts spring out at Johnny’s men, and we figure out why he’s tried a little too hard to con Johnny into thinking he’s won. Johnny’s too smug with presumed victory to catch on then, or when he tosses out the notion of bedding Ava and Boyd replies, “Well, I guess there’s something to be said for keeping it in the family.” (Which, if anybody’s qualified to speak on that position, well.)

There was some debate on this in our Twitter timeline as the Danny-instigated firefight was going down, so let’s throw this out and bat it around: Are the Crowes intentionally destabilizing Boyd’s operations? There was a look between Daryl and Danny right before all hell broke loose that seems to be open to interpretation, and there’s disagreement over whether Daryl’s “WHY’D YOU DO THAT?!” was genuine.  The Crowes need money, badly, on the one hand, and they stand to make more of it if the drug pipeline into Harlan is wide open and they’re part of its workings. On the other hand, they have yet to stage a smart or graceful grab for money or power this entire season, and they’ve had their share of tries. “Tell Mr. Yoon we have a problem,” says Boyd, which seems like about the last message you’d want to be caught dead delivering.

We’ve been frequently gobsmacked by the gap between the carriage of Ava in the pilot and the Ava of Season 5, but this hour sees a gratifying return of some guts. Having fashioned herself a reasonably fetching prison bob following the failure of Boyd’s latest protection scheme, Ava aligns herself with Judith (Dale Dickey, who should be showered in roses and surrounded by trophies for the way she croak-drawls “maaaaaaannnn” alone), a self-styled prison preacher who also heads up the in-house drug trafficking business. (Sounds familiar, right? When it comes to authority figures, it seems, the lady does have a type.) And in no time flat, Ava’s cut out the middleman in the penitentiary heroin trade and offered herself up as Judith’s new narcotics source. Which will depend, of course, on Boyd’s business. Wouldn’t it be funny if, in this one instance this season, he managed not to let her down?

To those of you who would doubt the fourth-wall-busting oracular powers of the Crowder Crest, you have only to witness its disarray upon Boyd’s exit from Ruiz’s transport, and its alertness during his staircase exchange with his cousin. The signs are all there, if you know where to look. Believe.

One smartphone, one irate backgammon enthusiast, Johnny Crowder’s three henchbillies, and apparently Johnny himself. Boyd’s getting pretty good at killing folks on the second try, isn’t he?

Detour of the Week: Allison vs. Wendy vs. Raylan

The thread that’s hardest to buy into in Episode 7 is this Wendy-Allison suspension business. You’d have to think that Child Protective Services deals with backlash against its agents from vindictive families on a regular basis, and the swift decision comes off a little rickety. There are ways to justify this that could’ve been put onscreen — an apathetic or adversarial boss for Allison, some sort of supporting evidence that she’s not good at her job, a moment in which she realizes she can’t talk about Danny running her off the road without revealing why she didn’t involve the police — but what if it’s meant to signify that Wendy, with these unseen powers of persuading a government authority to take out the agent in charge of investigating her own ward’s welfare, is more dangerous than we think?

1. “Guy threw his leg out the window, jumped out, slid down the light pole and then gave me the bird! C’mon, I love this guy, let me catch him.”

3. “God, no. Technology to reply to a post is decades away.”

4. “Always found it kinda like a cut-rate hush puppy.”

6. “He was surprisingly fleet.”

8. “Said you disrespected her computer skills.”

Mostly: Which Crowe is most to be feared? It was set up to be Daryl in the early episodes. It’s looked like Danny the past couple of weeks. But look at how Wendy, whose objective was to be here for Kendal, is now going after Raylan at the expense of her little brother’s well-being, with all her other brothers’ cornered-animal canniness, a dedicated work ethic, and without the hindrance of being the slightest bit crazy.

Speaking of which: How fast is Kendal’s internal time bomb ticking? Who’s Uncle Jack? How does Raylan know Dilly’s dead, and does he know Danny killed him, and is he pretending it was Daryl for Wendy’s benefit, or are these just a series of felonious noodles thrown against walls? Did anybody else see Nelson gesture about the breakfast sandwiches like he was sizing up a bluegill? Are breakfast subs a thing? Is Boyd gonna have to conduct a job fair at this point to fill out his ranks, or what?