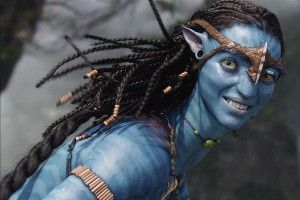 Take even a cursory look through some of the less presentable recesses of the Internet and you’ll quickly learn one thing — everyone wants to be a Na’vi. When James Cameron dropped Avatar back in 2009, something of a fledgling movement arose, made up of everyday folks who saw the nature-centric, harmonious (and, yes, completely and utterly fictional) world of Pandora, and its Na’vi people, as preferable to our own. See: Will it be possible to create real life Na’vi from Avatar?; What do the Navi people of Avatar (the movie) eat?; and the ever-helpful How to be like a Na’vi, featuring such instructions as “Get in touch with nature,” “Find a deep connection with the nature around you,” and “If you want to look like one if you’re a girl you can use blue eyeshadow.” Or how about the classic Avatar Makeup Tutorial (“In order for you to be legit Pandora people you’re gonna have to opposite-bleach your skin and dye it blue”)? And let us not forget this timeless headline: Avatar: Na’vi-impersonator secession group formed in Florida.

Well, as is their wont these days, the Chinese have now beaten us to it. Cameron spoke to THR about the upcoming Avatar sequels, and explained that not only will China be involved in production, it’s people will actually get to live in Pandora. Take it away, James:

“Within five years, China could easily be as big a gross-revenue market for film as North America, and there are very specific economic incentives for having both Chinese content and Chinese co-production. We are already funded on Avatar 2 and 3, but if we qualify as a co-production, there might be some incentives in the percentage of revenue we can take out of China” … At very least, the director could recruit Chinese actors to work in the movies … “[W]e can certainly use Chinese actors as performance capture actors because any accent issues will hide within the Na’vi accent … So we can have Chinese Na’vi; [and in the live-action sequences] we can also have Chinese actors who speak English in the film. We are projecting a future in Avatar, and if you project that future out, it is logical that there would be a number of Chinese amongst the contingent on Pandora.”

Grantland Exclusive: The Challenge 'Battle of the Seasons' Preview Clip